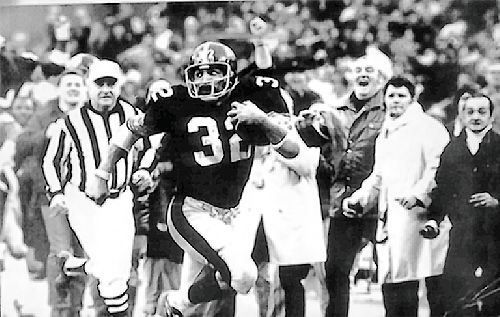 Franco Harris going in for a touchdown with the Immaculate Reception

NFL Films had a video of the 100 greatest touchdowns in NFL history that came out in the 1990s which labeled Franco Harris’ Immaculate Reception in the 1972 playoffs, as the greatest ever. It was a completely fair assessment.

It launched a Hall of Fame career for Franco,  launched the greatest NFL playoff rivalry of the Super Bowl era, and was the birth of one of the greatest dynasties sports has ever seen. Although the Raiders did get revenge in the 1973 playoffs, Al Davis and the Oakland faithful vehemently disagree with the referee’s ruling that day.

Coach John Madden has said on numerous occasions how he disagreed with the officials not signaling touchdown when the play was over. the refs had a conference first before ruling the touchdown stood that gave Pittsburgh a 13-6 lead with 5 seconds left. So what led to the animosity and fame of this touchdown??

Before the rule changes of 1978, a deflected forward pass could only be caught by an offensive player unless it was touched first by a defensive player. It couldn’t bounce from one offensive player to another like we have now with a Hail Mary. By the way, The Hail Mary is also a nickname for a famous last second touchdown in the 1975 playoff win by Dallas over Minnesota and not the creation of Tom Landry…yet I digress.  The Immaculate Reception had everything: drama, controversy, and extreme importance.  What started the controversy is the lingering question: Did the ball hit Oakland Raider Jack Tatum or Pittsburgh’s John “Frenchy” Fuqua before deflecting to Franco Harris?

Alright lets set it up for you: The Pittsburgh Steelers were experiencing their first real winning season in 39 years in 1972. They were powered on offense by a rookie running back from Penn St., Franco Harris. He had powered for 1,055 yards and 10 TDs to give the Steelers their first breakaway runner. He seemed to be the centerpiece for a team Chuck Noll had been building through the draft over the last 4 years. Pittsburgh had made the playoffs for the first time ever and on December 23, 1972 would host the Oakland Raiders in a AFC Divisional Playoff Game.

Meanwhile the Raiders had been mainstays in the postseason over the 6 previous seasons. They had made it to Super Bowl II before the 1970 AFL/NFL merger, and the 1968 and 1969 AFL Championship Games. After losing the first ever AFC Championship Game in 1970 to the Baltimore Colts, they were a team in transition and missed the playoffs in 1971. However with an infusion of new Raiders to put the team in the winner’s circle again, they won the AFC West and were back in ’72 and after that elusive first Super Bowl championship. First they had to go to Pittsburgh….

On a cold, dark and dreary day these two teams met and slugged it out in one of the most physical games of the era. We had two smothering defenses pounding the offenses into the ground and late in the 4th quarter the Steelers had a 6-0 lead. Desperate for some offense, John Madden inserted a young, mobile Kenny Stabler in for an anemic Darryle Lamonica which produced immediate results. On a last second desperation drive, the Raiders came scrambling downfield with their young QB in his first significant action in an NFL playoff game.

At the Steelers 30 with less than 1:30 to go, Stabler avoided the Steel Curtain, took off and scored on a 30 yard TD run to give the Raiders their first lead of the game 7-6.  “The Snake” had done it!! A hero was born!! There was bedlam on the Oakland sideline and with 1:13 to go began to make reservations for they would host the AFC Championship Game against the undefeated Miami Dolphins.

A confident Raider defense took the field expecting to thwart the Steelers final offensive attempt. After three failed passing attempts the Steelers were faced with a 4th and 10 from their own 40 yard line with :22 left in the game. The Raider defense had played a defensive masterpiece on the road. One more play and it was on to face the Dolphins. They hadn’t given up a touchdown all day…what could possibly happen?? Terry Bradshaw dropped back, this was the Steelers last chance, he scrambled to the right to avoid the rush and as two Raiders converged…Bradshaw stood his ground and heaved one down the middle to an open “Frenchy” Fuqua. However the late Jack Tatum was closing on the spot where Frenchy reached up to make the catch and….

A bloody playoff rivalry was born and from 1972-1976 these teams met every year in the playoffs. The Raiders gained some revenge in 1973 with a 33-14 thrashing. Then Pittsburgh turned the tables winning the 1974 and ’75 AFC Championships over Oakland before winning Super Bowls IX and X. Then when the Steelers were going for a three-peat, ran into a 13-1 Oakland team that defeated them 24-7, on their way to their first Super Bowl win in the 11th edition over the Vikings. It all started with the ’72 playoffs and The Immaculate Reception.

Tatum hitting the ball and Fuqua.

In Columbus Ohio in Winter 1991, I had the good fortune of running into Franco Harris and James Lofton who were there for the Archie Griffin Tennis Classic I believe. Anyway, sitting at the bar and prying him with beer I could not get Franco to admit the ball had bounced off Frenchy Fuqua and therefore should have been incomplete. “Come on, its just us sitting in a bar. Who would know?” I kept prodding him. Lofton was just laughing his ass off because Franco would just grin and shake his head every time I asked him.

Franco grabbing the ball just inches from the turf a second later.

It was cool talking football with him and for the record… I believe the ball bounced off of the back of Fuqua’s helmet.  Follow the replay and you’ll see Fuqua flash in front of Tatum who the ball was headed for. If Tatum was in front of Fuqua, he would have put out his hands to knock the ball down, not brace for impact.  When was the last time you saw a football hit someone on the shoulder pads and bounce 15 yards (45 feet) away??  Lets have it ….What say you?? Did the ball bounce off of Frenchy Fuqua or Jack Tatum??

Epilogue: My initial thought of the ball bouncing off Fuqua, maintained for decades, I have changed my mind. After blowing it up and slowing the footage down, you can see the ball move past Fuqua and hit somewhere on Jack Tatum’s right shoulder / chest. I magnified the footage and slowed it frame by frame. It’s still the greatest play in the history of the NFL and I know the debate will rage on.

10 thoughts on “The Immaculate Reception: Before There Were Hail Marys”