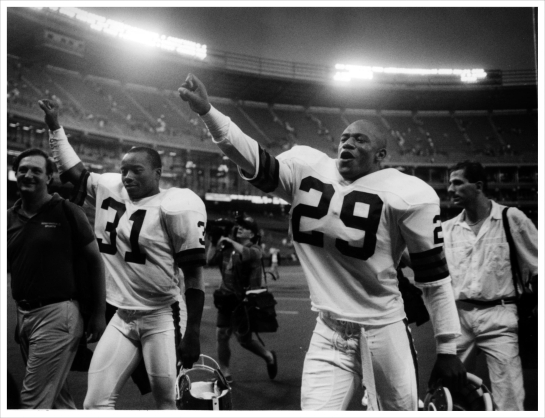 From 1970-1985 there was the “Three Rivers Jinx” where the Browns lost 16 straight against their division rival Pittsburgh. With Dixon and Minnifield’s rise to prominence, the Browns won four straight until they were broken up as a tandem.

We have always believed that some of the greatest NFL stories have been left on the cutting room floor when it comes to players that didn’t play for the glamour teams. Such is the case for the best cornerback tandem in modern NFL history. During this offseason of condensed free agency, when it appeared Namedi Asoumgha might wind up with Darelle Revis to form the best conrerback tandem in decades. We had thoughts and images of Frank Minnifield and Hanford Dixon dancing in our heads.  They were the best tandem in league history and yes better than Lester Hayes and Mike Haynes of the Los Angeles Raiders. Dixon and Minnifield starred and went to Pro Bowls together for 3 seasons. The most in NFL history.

The Hayes / Haynes connection really was half a season, or at least it’s zenith. Alright they did have a good 1985 but what happened in 1984?? Haynes joined the team in week 6 of 1983, and played on through the season but look up the Raiders 1984 statistics on defense after Super Bowl XVIII, abysmal. The Raiders were 25th against the pass in a 28 team league. Case and point Dan Marino threw for his 37th TD to break the all time touchdown record for a season and went on to throw for 470 yards and 4 TDs on them. They got scorched … Mark Clayton almost put up 200 on ’em…yet we digress. No one put yards on these two like that during their years together. Yet they don’t get their just due for being the terrific tandem that they were and should be receiving more looks when it comes to Hall of Fame Consideration. 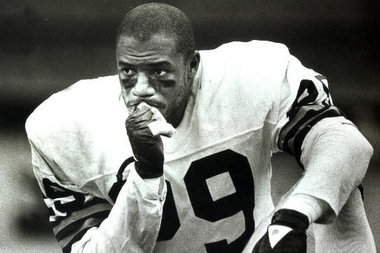 From 1986-1988 these two Cleveland Browns were your Pro Bowl Starters for the AFC in Honolulu Hawai’i. Understand that this was the heydey of the AFC Central as well. Of course Steeler fans will disagree but this is where the entire division reigned near the top of the AFC as a whole. From 1986-1989 there was an AFC Central team in the AFC Championship Game all four years. The Browns in 1986 and 1987, the Bengals made it to the Super Bowl in 1988 and then the Browns returned in 1989 to the title game.

Throughout the division there were stellar receivers in Louis Lipps / John Stallworth of the Steelers, Ernest Givins, Haywood Jeffires, Drew Hill of the Houston Oilers, then Tim McGhee, Cris Collinsworth, and Eddie Brown (The [[_]]) of the Cincinnati Bengals. Dixon and Minnifield kept them under wraps throughout this era.

In fact, in 1986 the only receivers that topped 100 yards against them was Chris Burkett of the Buffalo Bills and Wes Chandler of the San Diego Chargers. Burkett’s numbers were strengthened by a 75 yard TD while Chandler piled up yards in garbage time during a 47-17 loss where many Browns starters were pulled during the finale. They had wrapped up homefield advantage and were in the midst of a celebration.

In fact during the AFC Divisional Playoff double overtime win against the Jets, in 6 quarters, Dixon and Minnifield covered Al Toon and Wesley Walker so tight the Browns produced 9 sacks. An NFL playoff record. Neither receiver went over 100 yards and the touchdown that Wesley Walker scored was on a flea flicker and the safety had coverage. 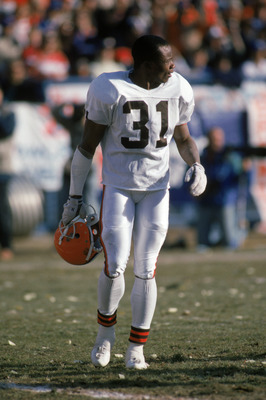 In ’86, Dixon gathered in 5 interceptions, while Minnifield picked off 3 on their way to their first Pro Bowl together. Along the way they shut down the prominent receivers in their division, Mark Duper and Mark Clayton, who both made the ’86 Pro Bowl, and future Hall of Famer James Lofton. None of which gained over 100 yards against them and by the way…. Duper (1,313 yds 11TDs) and Clayton (1,150 yds 10TDs) battled Dixon and Minnifield on a Monday Night and these two Browns gained the country’s attention and respect with that performance.

In 1986 Dan Marino threw for 44TDs and over 4,700 yards…so he was at his zenith. This was the second time, going back to the previous season’s 21-20 playoff loss to the Dolphins that they did this to Miami. In the playoff loss in 1985, Duper never caught a pass and Mark Clayton only caught one!! And that game was in Miami!!! So they came in with something to prove and got shut down again.

So here comes the most misreported fact in NFL history, The Drive, during the ’86 AFC Championship Game. Keep in mind that Denver only had 216 yards for the game on offense going into that famous last drive. Erroneously and without fact checking these two get blamed for this loss when only 1 pass to Steve Watson at the 2 minute warning at midfield was thrown in their territory. The Brown’s Dave Adolph opted to go into a zone and the main passes thrown by John Elway was a pass over 20 yards to Steve Sewell, a running back going up the seem into Chris Rockins territory.

The other was a pass on 3rd and 17 where Mark Jackson who started on Dixon’s left side cut into an opening on a zone in front of the safety. They were just well executed plays. Throw in 2 scrambles by Elway for first downs because the Browns coverage forced him to and a screen pass to Steve Sewell and they were now at the 5 yard line. Again down in the red-zone, the Browns were in a Nickel zone facing a multiple receiver set. They ran a scissors route and threw the ball inside Nickelback Mark Harper to Mark Jackson for the tying touchdown. Now where was it these two failed to deliver??

Even in overtime on the winning drive by the Broncos the two big plays were a corner route to TE Orson Mobley for over 20 yards and another to Tom Watson for a 22 yard gain where Felix Wright #22 made the tackle in zone coverage. Karlis kicks the winning field goal and Denver was off to the Super Bowl. Yet time and time again, writers and nitwit pundits bring up The Drive without knowing ANY of the evidence. Lionize John Elway, fine, but don’t victimize these excellent players who performed well on that day. Take a look

Who were these two?? Well you had Hanford Dixon, who when he came into the league might have been the fastest cornerback in football.  The Chancellor first caught wind of him when he chased down Buffalo’s Joe Cribbs enroute to a 60 yard touchdown in 1981 as a rookie.  Dixon had been blocked and Cribbs had a 15 yard cushion when this flash of brown and orange tracked him down like Darryl Green on Eric Dickerson. He didn’t prevent the touchdown but he had speed to burn as a young player as that play signified.

Dixon was drafted out of Southern Miss in the 1st round and developed into a top flight man to man cornerback who lined up right in a receivers faces. He was the taller of the two at 5’11 and 186 lbs and was as fluid an athlete that has played corner in the NFL. He could turn and run with anybody that got through his “strike” off the line of scrimmage. He was as effective as a Lester Hayes and had his best year in 1987 when it was recorded that only 7 passes were thrown his way the entire year. He was first team All Pro in 1987 which was the middle year of their 3 year run as well as Pro Bowl teammates with Minnifield. 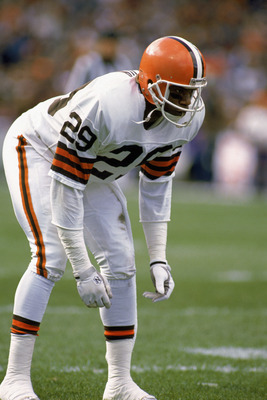 Hanford “Top Dawg” Dixon one of the all time great cornerbacks.

Mighty Minnie?? Yes that was the nickname for Frank Minnifield on the poster that had he and Dixon atop the roof of the Cuyahoga County Courthouse that sold all over Ohio. Top Dawg and Mighty Minnie were their nicknames. Hanford was the one that coined the phrase “Dawg Defense” during the off-season to motivate the defensive line during training camp in 1985. It caught on full fledged in 1986 so he earned that nickname. Minnifield was the harder hitter of the two.

Frank Minnifield was the shorter of the two at 5’9 180lbs, and had calves as large as his thighs. He had an unbelievable verticle jump as did his brother Dirk Minnifield who starred at the University of Kentucky and later played for the Boston Celtics. Frank played at the University of Louisville and joined the Browns after a 2 year stint in the USFL. He was voted All Pro in 1987 & 1988 and was voted to the Pro Bowl 4 times 1986-1989.

In fact it was his 1988 season that was in our estimation the greatest season by a cornerback in NFL history. With injuries to the Brown quarterbacks that season, the defense had to bear the brunt of the work. In that crucible and facing future Hall of Famers Art Monk, Steve Largent, and ’88 Pro Bowlers Eddie Brown (1,273 yds/9TDs), Mark Clayton (1,129 yards / 14TDs), Drew Hill (1,141 yards  /10TDs), Al Toon (1,067 yards /5TDs), J.T. Smith (986 yards / 5TDs) and Andre Reed (968 yds / 5TDs) Minnifield in 11 of 17 games against this top competition allowed ZERO touchdowns all season. An incredible performance. He allowed ZERO touchdowns for the entire 17 game slate.

Unfortunately all good things come to an end and the Browns window to the Super Bowl shut without their having earned the trip.  They played in 3 AFC Championship Games in four years but came up short. In all actuality, they were a real good team who almost stretched it to greatness based on the exploits of two tremendous cornerbacks who masked other Brown defensive deficiencies. For their careers Dixon was a Pro Bowler on 3 occasions and Minnifield 4, and each were 1st team All Pro Once. They were intimidating and could cover the field and as a tandem were the best ever. How good would the Cleveland Browns been without them??? How much better would the Cleveland Browns had been had Safety Don Rogers not died from a cocaine overdose the week after Len Bias in summer of ’86??

Below is the middle of their 3 year run in Honolulu when they were 1987’s All Pro cornerbacks.

10 thoughts on “Best NFL Cornerback Tandem Ever: Frank Minnifield & Hanford Dixon! Time to clear up the misreporting of their hand in The Drive.”

TBT - Taylor Blitz Throwback - The beauty of this TD from XVIII LOL I was couldnt get the late Bruce Davis to admit he leg whipped on this play. He'd laugh..."I don't know anything of said action on this play" was his repsonse each time. Now when I see the play it just makes me smile. Rest easy Bruce
"Hey..hey! Lets go Buffalo!" #bills #buffalobills #taylorblitztimes
Jack "The Assassin" Tatum bringing the pain in Super Bowl XI #jacktatum #oaklandraiders
Its my theme music... every good hero should have some
So youre our new RT. Well your mission, should you choose to accept it, is block Reggie White one on one. Good luck...lol
Wayback Wednesday - Lawrence Taylor as a rookie in preseason his college number of 98. Interesting he changed to #56 because of "Hollywood" Thomas Henderson ...yet A Football Life didnt ask him why. In the old NFL number by position, linebackers were able to wear 50s and 90s numbers. Remember Blitzburgh in all 90 numbers?
Loading Comments...