Well the NFL has turned on it’s axis. Gone is the smashmouth reputation of the NFC East as 3 of the 4 teams will take to the air like never before.  Only the earthbound Washington Redskins are going to root it out the hard way. Dynamic playmakers in space will be the norm as the Eagles with the receiving trio of Desean Jackson, Jeremy Maclin, and Jason Avant will open up playbooks all over the division to keep pace.

One of the real reasons for this paradigm shift can be attributed to Michael Vick becoming the Eagles starter, and the Cowboys drafting of talented WR Dez Bryant to team with Pro Bowlers Jason Witten and Miles Austin. The Cowboys have a fleet of 3rd down back types in Tashard Choice, draft pick DeMarco Murray, and Felix Jones. That tells you Coach Garrett and Tony Romo will have the artificial sky at Jerry World filled with footballs.

So why didn’t we address the Washington Redskins yet?? In a division where every team is going to assault their own record books in passing, the Redskins come in with last year’s 31st ranked defense against the pass. You remember that memorable Monday Night last year when the Redskins secondary took a ride on the Michael Vick Experience, losing 59-28, right?? Well to further enhance our reputation that Mike Shanahan is in over his head he only drafted one DB!! That wasn’t until the 5th round. After fumbling with the Donvan McNabb situation, releasing Clinton Portis (The U) who was slowing down, the keys to the offense are handed over to QB John Beck. Who?? Exactly! He’ll be handing off to ….zzz… sorry we want to keep you awake for the rest of this article.  This should be the swan song for Coach Shanahan as this team needs to get younger. During that type of transition a younger more dynamic coach is needed. One like John or Jim Harbaugh those players can relate to. The Redskins have been one of the most mismanaged organizations of the last decade and it’s embarrassing to watch. This once proud franchise whose games back in RFK that are so romantically revered, have to suffer through Daniel Snyder’s regime. We’re embarrassed for Redskins fans. Mike Shanahan?? One of history’s most overrated coaches whom the game has passed by. 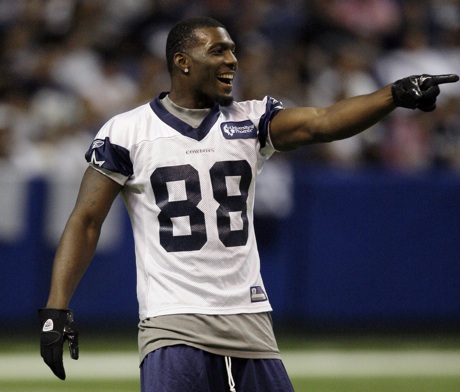 Now on our facebook page it’s been fun to listen to Dallas Cowboy fans decry that the Super team from Philadelphia hasn’t looked like it in the preseason. All of the NFL will struggle this year with rhythm and timing early. The offenses will struggle until they gain they’re sea legs around the 4th week and after that we will be in for a season of high scores as defenses, who haven’t totally conditioned this offseason, start to tire.

As for Cowboy fans, there will be plenty of offense as Romo has to pass to keep the Cowboys in games and coming from behind with such a suspect defense. Romo is going to flirt with 5,000 yards this year. He’ll be forced to. Already he owns the all time Cowboys yardage mark for a season with 4,629 and the two highest touchdown totals with 36 & 29 respectively. Quit with the Troy Aikman comparisons already. He threw for over 20 TDs in a season just once. Romo needs to trust his new freak of a weapon in Dez Bryant. If he is one on one with a corner, chuck that ball deep and don’t settle for the 4 yard pass on 3rd and 17. What Romo needs is some daring. The Cowboys will come undone with the same formula as in 2010: inadequate pass rush, trouble stopping the run and a secondary that suffers from the lack of a rush. You can score so much but invariably you have to stop your opponent.

As for the New York “Football” Giants, they are the team with the total package right now. They can beat you running the football with Ahmad Bradshaw and a rejuvenated Brandon Jacobs or they can send a fleet of receivers into your secondary. They seemed to have smoothed things over getting Osi Umenyiora back to camp and should field a fierce rush. The question is can the secondary play as well as advertised?? The other question mark is the enigmatic Eli Manning who threw 25 interceptions last year. What is puzzling about his play is you can watch him quarterback on drives where he looks off the safety, then complete his footwork and deliver a 20 yard strike downfield. Then follow up with an interception where you’re shaking your head at home “Didn’t he see that linebacker sitting there?” He has to become more efficient with the football and not leave his defense out to dry so much. Yet it’s this “on again-off again” part of his character that will cost the Giants, and they will miss the playoffs again because of it.

Let the comparisons begin for the Philadelphia Eagles. Are they going to be the ’94 49ers who signed a slew of free agents then went on to win Super Bowl XXIX?? Or the 1995 Miami Dolphins who picked up 8 free agents in an attempt to get Dan Marino his ring, only to fall short once the team didn’t gel and stumbled to a 9-7 finish?? We’ll say closer to the 49ers situation.  It’s only a matter of time for this team to get open and scoring on offense. They brought in RB Ronnie Brown to aid LeSean McCoy in running between the tackles. They have WRs Sinorice Moss formerly of the Redskins and Steve Smith of the Giants to add further explosion if Macklin or Jackson get hurt. On defense, they pulled a coup when they signed Asoumgha. The fact they had Rodgers-Cromartie already in the fold from the Kevin Kolb trade was enough of a boost to the secondary. Now they can be special.

On defense, the Eagles linebackers were abysmal last year. Go ahead start both Casey Matthews from Oregon and Greg Lloyd out of UConn. Both are high motor guys and come with great pedigrees. Remember Pittsburgh Steeler great Greg Lloyd from the 90’s?? Yup thats his son and you remember Matthews who came up with a huge forced fumble in the 4th quarter for Oregon during the National Championship Game?? Yup, thats him! The younger brother of Green Bay’s Clay Matthews and son of Cleveland Brown great Clay Matthews. Put these guys on the field and let them run to what they see. The signing of free agents Anthony Hargrove (Saints), Cullen Jenkins (Packers), and Darryl Tapp (Seahawks) should provide some additional pass rush. They lost safety Quentin Mikell to free agency but I bet he regrets not entertaining a one year tender to play on this team. Can the City of Brotherly Love have a Super Bowl quality team?? This team is loaded for bear and once they jell they can be monstrous. Funny thing is we didn’t even begin to talk about Michael Vick yet. NFC East champ?? Easily. NFC or Super Bowl Champ? We shall see…

Next Up: NFC Predictions