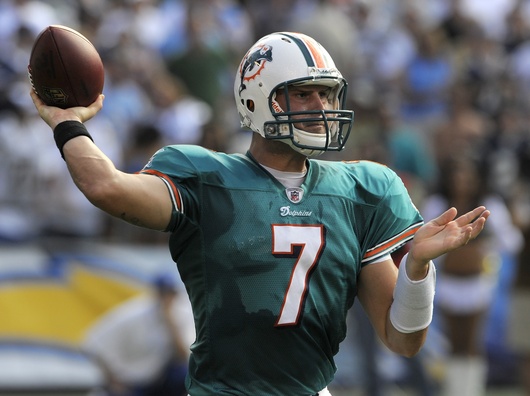 Welcome to Inside Our NFL’s Monday after a Sunday full of NFL football that was chock full of surprises. In the AFC East we learned this entire division is going to be good, but what about Miami?? The Dolphins traveled to Cleveland in search of their first win and played the Browns to a standstill and had a 16-10 lead late in the 4th quarter. Chad Henne had his best game of the young season. In the first half alone he completed 15 of 19 passes for over 190 yards, yet only completed 4 passes in the second half and finished with 255 yards. Colt McCoy drove the Browns to a late score with a touchdown pass to Mohamad Massaquoi with :43 in the game. The Browns moved to 2-1 while the Dolphins are scratching their heads after a numbing loss, dropping to 0-3.

Their missing a belief in themselves and should have finished off a Browns team without Peyton Hillis. First off where is Brandon Marshall?? Second Reggie Bush is a space player, he can’t run between the tackles. He didn’t at USC and he didn’t in New Orleans. It was this fumble when the Dolphins had Bush running out of the I formation, that turned the game around when the Dolphins had a 7-0 lead and had momentum. Get Brandon Marshall the ball 15 times a game and you’ll start winning. He had 4 catches for 43 yards?? Nowhere near enough. Denver used to get him the football 100 times a season so what gives??  Their position in the standings…lets take a look

Elsewhere in the division the New York Jets traveled to play the Oakland Raiders and the second leading rusher in the NFL in Darren McFadden. The gameplan was to stop McFadden with their NFL’s 8th best defense coming into this matchup. Each game Rex Ryan’s boys start slow offensively and rely on the defense to keep control of the game. Well it’s a good thing they didn’t in this one. After the Jets moved to a 17-7 lead, the Raiders didn’t abandon the running game and were rewarded. In a surprising show of force, the Raiders ran the football down the Jets throats as McFadden exploded for 171 yards and 2TDs. McFadden ended the game as the NFL’s leading rusher. The Raiders made the Jets look slow as they showcased speed on reverses, special team plays, chasing down Tomlinson from behind after a 71 yard gain. Rex Ryan’s boys will be fine as long as they play a slow plodding game. Yet other teams are showing that they do have some speed within the division.

Where you may ask? Try Buffalo where the NFL and the New England Patriots were introduced to a team that is playing without fear. They lined up against their longtime division nemesis and promptly fell behind 21-0. This is where a team that doesn’t have a team wide belief in themselves comes apart and gets routed. Ryan Fitzpatrick calmly led the Bills back into the football game and by halftime had the score reduced to 21-17.

Tom Brady set the NFL record for most passing yards over a 3 game period as expected with 1,258. However the Bills defense picked him off 4 times yesterday, equal to his interception total for all of 2010. One of those interceptions brought the Bills all the way back to take a 31-24 lead early in the 4th quarter. What did the Bills learn about themselves?? They proved they can beat anybody playing their game.

After allowing a Tom Brady 4th down pass to tie the game at 31. Fitzpatrick on the first play hits a 5 step hitch and throw for 40 yards up the sideline over a back pedalling CB Devin McCourty. A screen pass to Jackson netted another fifteen. Then splitting into a 5 receiver look, the Bills ran Jackson on a crossing route and Fitzpatrick hit him in stride taking it more than 30 yards down to the one.  You read that right, with just over 3:00 to go instead of conservative passes this team was throwing with gusto starting with a bomb. Three plays they were down to the 1 yard line after gaining 80 yards. They are 3-0 after downing the ball and kicking the winning field goal, 34-31 and the entire NFL took notice. This team is fast and it’s fearless. They don’t know how good they can be and after breaking a 15 game losing streak to a long time nemesis, the sky is the limit. For if most pundits have the Patriots picked to make it to Super Bowl XLVI, what does that say about how good this Bills team can be now that the Patriots have been vanquished?? We will all be watching these interesting developments.