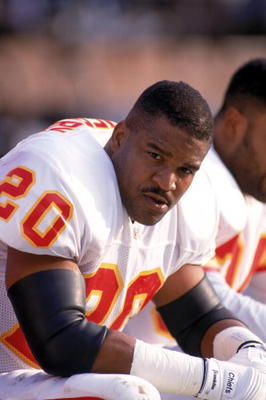 All Pro safety in 1986, Derron Cherry was a regular on Frank Gansz special teams.

How often do you hear NFL, collegiate, or even high school football coaches say that “Special teams is a third of the game”?? Then rarely use their special teams as more than a field position element of the game. Aside from the Chicago Bears of recent years with Devin Hester, very few use their special teams as a weapon. Nor do most teams use their superstars on this third unit. Well in 1986, the Kansas City Chiefs fielded the best special teams and they were powered by the “Million Dollar Secondary” which was one of the best in NFL history. Safeties Derron Cherry and Lloyd Burruss coupled with the great cornerback tandem of Kevin “Rock” Ross and Albert Lewis manned the last line of defense.

You have to remember these were dark times for a once proud franchise. Not since the Christmas Day 1971 game of Ed Podolak in the longest game ever played vs the Dolphins, had the Chiefs participated in postseason play. Nothing was really expected of the ’86 version as well. There was an impasse at quarterback where the team went back and forth between quarterback’s Bill Kenney and Todd Blackledge with moderate success. They ran the football by committee between ex Browns Boyce Green and Mike Pruitt and as the season was concluding was down to KR Jeff Smith running the football. Smith’s real claim to fame was the National Championship upset where the Miami Hurricanes upset Nebraska, 31-30 in the ’84 Orange Bowl. It was Smith (Mike Rozier’s backup) who scored the final touchdown before the fateful two point attempt. Aside from Stephone Paige who once held the NFL record with 309 receiving yards in a game, none of these players were of distinction or Pro Bowl performers.

However there was hope in the #4 rated defense in the NFL that kept games close and special teams coach Frank Gansz utilized the best players on the team. This included Pro Bowlers Cherry, Burruss, and NT Bill Maas. Albert Lewis was a master at blocking punts as well. Cherry was All Pro at safety, having picked off 9 passes, to share that distinction with Ronnie Lott. Strong safety Lloyd Burruss (5int.s) enjoyed his best season in 1986 leading the NFL in both int. return yards 193 and touchdowns with 3. In fact it was Burruss with 2 interception returns for touchdowns against eventual AFC Champion Denver in week 14, that put the Chiefs in position to make the playoffs. It was this 37-10 victory that allowed the Chiefs to control their destiny with an 8-6 record. A win the following week against the Los Angeles Raiders set the Chiefs up for a do or die game in Pittsburgh to make the playoffs.

What took place was one of the oddest games in NFL history in one regard, and one where a team taught everyone what it meant to use their special teams as a weapon. The Chiefs defense actually had one of it’s worse games of the year as they allowed 515 yards to Mark Malone and the Steeler offense. It was actually the Chiefs special teams fault they gave up so many yards. However they kept the Steelers out of the endzone for much of the day.  Of course the Chiefs offense disappointed only gaining 171 yards with the football. So what happened??

They took control in the 1st quarter when they had the Steelers backed up near their own goal line. Where most teams set up for a midfield return, Gansz and the Chiefs attacked. Cornerback Albert Lewis flew in from the wing to block the punt which was recovered by Derron Cherry in the endzone to take a 7-0 lead, silencing Three Rivers Stadium. Funny thing was had Lewis not blocked the punt, Burruss would have as they crisscrossed right in front of the punter. After trading field goals in the 2nd quarter, Boyce Green returned the subsequent kickoff 97 yards to extend the Chief lead to 17-3. A team with less than 100 yards of total offense had nearly a two touchdown lead in a game they needed to make the playoffs. Go figure…yet before the Steelers could get to halftime and make adjustments their offense raced downfield to narrow the score following another field goal.

The Steelers were in position for a Gary Anderson field goal to bring Pittsburgh to within a touchdown. The crowd would be back in the game and with the Steelers defense totally stifling the Chiefs offense, the game would turn in the second half right?? Well not quite. Pro Bowl Nose Guard Bill Maas charged through two Steeler linemen and blocked the kick. Lloyd Burruss snatched the loose ball and sailed 78 yards to an insurmountable halftime lead of 24-6. The Steelers made it close but with a chance to win it late in the 4th quarter, LB Tim Cofield forced an errant throw by Malone that was intercepted by Lewis to preserve a 24-19 win.

This great secondary who rarely got their due outside of Kansas City had performed a game for the ages on defense and special teams. They kept scoring and putting themselves on the field yet only allowed 1 Steelers touchdown. If I were to wake you and tell you that you missed a game where a team won the game without scoring an offensive touchdown and were outgained 515-171 on the road, would you believe me?? http://www.pro-football-reference.com/boxscores/198612210pit.htm Folks it happened.

For 1986, this group led the NFL in interceptions and blocked kicks with 5. Burruss, Cherry, Lewis, and Ross intercepted 18 passes themselves. This team lost the AFC Wild Card to the New York Jets 35-15 to end their season, yet before they went away quietly Albert Lewis scored one of the Chiefs touchdowns with another blocked punt.  After this teams more and more started putting some of their best players on their special teams. It was this special unit in 1986 that showed how lethal your special teams can be utilizing your best talent.

3 thoughts on “Special Teams: Can they win you an important football game??”