On this date in 1983, the Kansas City Chiefs and the football world were shocked to hear Joe Delaney had died. He had been a lightning rod of excitement for two years as their featured back after being drafted out of Northwestern State. The Chiefs franchise had been down for the better part of a decade when Delaney burst onto the scene in 1981.

He ran for 1,121 yards on 234 carries with 3 TDs while winning AFC Rookie of the Year and Pro Bowl honors. He was the team’s lone legitimate star. He set the Chiefs all time rushing record of 196 yards against the Houston Oilers with Earl Campbell on the other sideline.

The strike shortened year of 1982 saw his numbers cut down significantly having only played 9 games. He was nicked with injuries and defenses were better prepared for him as he rushed for only 380 yards. He had the same injury that Sugar Ray Leonard made famous a year earlier, a detached retina. Yet what was going to be a bounce back year in 1983 for him didn’t come to be. 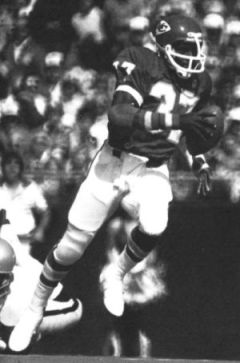 Aside from his untimely death, it’s sad to think what might have been. How great could he have possibly become as a player, father, or man of his community. As you’ll see in the short film he was one to donate his time to the youth of Houghton, Louisiana.

His loss was felt all around the NFL as teammates and foe alike all pondered what might have been. On October 7, 1984 at the press conference when Walter Payton broke Jim Brown’s NFL All Time rushing record, Joe Delaney’s name was the first he mentioned when he spoke of those with the same spirit that were unable to complete their careers who died before their time.

Joe Delaney left us 29 years ago today. His number 37 was retired for the Kansas City Chiefs and his #44 from Northwestern State was also retired. He was enshrined in the Chief’s Ring of Honor and team Hall of Fame. Gone but never forgotten and definitely a hero always.

5 thoughts on “The Soul of The Game: Remembering Joe Delaney”

Courtesy of the Black College Hall of Fame on display in the Pro Football Hall of Fame... The "Roos" the late Walter Payton was wearing when he passed Jim Brown to become the NFL's All time leading rusher back in 1984. Richard Dent's game ball from Super Bowl XX #taylorblitzarchive #HBCUs #JacksonState #TennesseeSt #WalterPayton #RichardDent #keepthebearsinchicago
Tell The Truth Tuesday: Taylor Blitz was even the first to suggest he would take Carson Wentz's job months before he did. Even with a former Eagle telling me I was crazy for suggesting it. LOL Well... The Chancellor nailed that one too with Jalen Hurts
Tell The Truth Tuesday: When the Philadelphia Eagles win the NFC Championship Sunday the national media Super Bowl stories will start and begin with Jalen Hurts. Didnt Taylor Blitz Times step up to the plate and say why he was a better draft choice than Nate Stanley (who?) Jacob Eason, Jake Fromm, Tua, and Jordan Love where Athlon and ESPN had Hurts 8th or worse??
Damn... I just came home for lunch and they were on Dak
Loading Comments...