Has there ever been a running back that was more emulated than this 1970s icon?? When you look back at Foreman’s numbers, they don’t jump out at you. However it was his immediate impact on the entire football landscape that made him important. Every NFL fan can remember his spin moves and patented lateral side step moves that left linebackers reaching for him instead of getting a full on shot. If you close your eyes right now you can picture the famous shot from Super Bowl XI against the Raiders as he spun off two defenders. He was one of the breath-taking runners of the 1970’s…and before we get into the full argument, remember he spent many of his best years as a fullback. Yes, at fullback!

What impact are we talking about?? For starters the 1972 Minnesota Vikings were a run by committee team that only averaged 3.7 yards per rush as they gained 1,740 yards. Foreman’s insertion into the line-up as a rookie catapulted those numbers to 4.2 yards and a team total of 2,275 yards. Although he missed two games, he led the team with 801 yards while opening up the passing game being such a threat from the backfield. The Vikings went from 7-7 and fading from the promise of  a Super Bowl IV appearance a few years back, to 12-2 and NFC Champions in 1973.  Foreman reinvigorated the franchise.

Over the next three seasons, Foreman was as strong a force the NFL had seen when it comes to scoring production. He rushed for over 1,000 yards each season. Not only did he lead the Vikings back to the Super Bowl two more times, he set the standard for running back catching passes out of the backfield.

Did you know in 1975 he led the NFL with 73 receptions?? It was only the 2nd time a RB led the NFL and was a record at the time for catches out of the backfield. This accounted for 691 yards and 9 scores. 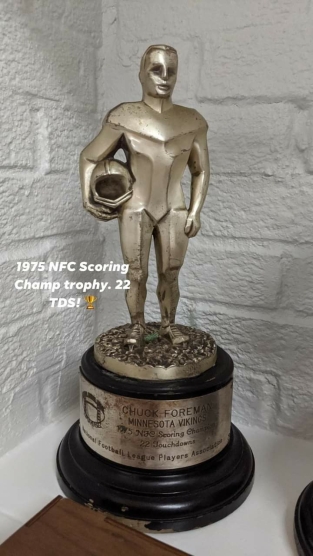 When you plug in his 1,070 yards on the ground with 13 trips to the endzone, Foreman accounted for an astounding 22 touchdowns. This tied the old record of 22 in a season with Gale Sayers because during the same game, OJ Simpson pushed the record to 23.

Not to be outshown Foreman scored 4TDs that afternoon while facing off against another great back. This was one of the landmark games in NFL history. Not only did OJ and Foreman (172 total yards & 4TDs) put on a show, Fran Tarkenton broke the NFL’s all time touchdown record by John Unitas throwing his 291st.

During the period 1974-1976, Foreman scored a league high 51 touchdowns. This was Chuck in his prime and before you compare his best 3 year period with any other running back’s best 3 year period remember this… Foreman had these numbers in a 14 game season, not the 16 game campaign.

However a closer look at his touchdown numbers reveal that his totals for ’74-’76 project to a whopping 57 scores had he maintained the same pace for a 16 game season. He measures up fairly well with these 6 Hall of Fame backs when it comes to scoring. That is the name of the game isn’t it?? It’s not just yards, its scoring, impact on the game, and winning. Even when you look at OJ Simpson’s yardage for his career it’s really a 5 year period that his work was condensed from 1972-1976.

So to talk about a players career in a condensed time frame in their prime isn’t foolish. OJ had five 1,000 yard seasons to Foreman’s three. If that was enough to make OJ NFL Films “Hero of the Decade” for the 1970s, where does that leave Foreman whose spin move was copied by fellow 70’s runners Walter Payton and Tony Dorsett?? Who also clearly outscored Simpson during their heyday.

His Vikings went to 3 Super Bowls in 4 years and only the “Hail Mary”  playoff loss to Dallas kept them from going to 4 straight.

He changed the way the game was played from the running back position. It was the Vikings realizing they could free him from the logjam of the line of scrimmage by throwing it to him instead of quick traps or dives. For his career he caught 50 or more receptions in a season five times during his career. Compare that to only 2 for Lynn Swann who is in the Hall of Fame as a receiver in the same era. For his career he ran for 5,950 yards 53TDs, which doesn’t include another 3,156 yards and another 23 scores receiving. In the end, Foreman was burned out before his time.

If it’s about making an immediate impact and being an unforgettable talent, than Chuck Foreman needs to take his place with other great backs. One trend which has gone on too long is the omission of Minnesota Vikings from the 1970s not making the Hall of Fame because of Super Bowl losses. Foreman sits within that abyss and the situation needs to be rectified. As a one of a kind talent from “The [[_]]”, his playing style was mimicked by a generation of up & coming running backs and he hasn’t been forgotten by legions of NFL fans. If that is not enough, we have to redefine the definition of a Hall of Famer.

For induction into the Pro Football Hall of Fame, I present to you: Chuck Foreman

Chuck Foreman in motion. Just as we remembered him…compliments of Tony Janetto

If you want to get in touch with Chuck…and more on this talent hit him up on his Facebook page or his official shop.