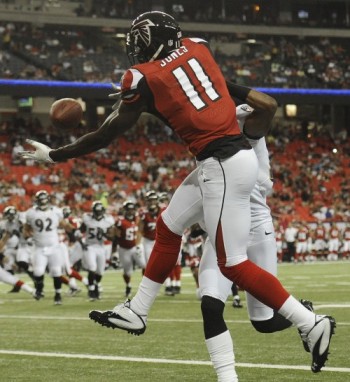 Second year wideout Julio Jones skies over a Ravens defensive back for a touchdown in last week’s preseason opener.

As the 2012 regular season beckons, many pundits and fans are looking for the Carolina Panthers to light up this division. There will be several young stars that will come to the fore in the toughest division in football, yet there will be one second year player who should take the league by storm. Oh you thought we meant Cam Newton?? He’ll do well but the player who is about to break out is WR Julio Jones of the Atlanta Falcons. His play so far in the preseason along with the maturation he showed toward the end of last year. Look out his star is on the rise.

No division in football has been as competitive from top to bottom as the NFC South. Since its inception in 2002, there hasn’t been a repeat division winner and again its the only division to have every team play for the conference championship during that time. Each team can run at you physically, Atlanta with Michael Turner (1,340 yards in 2011), thunderous LeGarrette Blount (1,007 yards in 2010), former Heisman winner in Mark Ingram, and former twin thousand yard rushers DeAngelo Williams and Jonathon Stewart in Carolina. Yet with last year’s emergence of Cam Newton and 2010’s Josh Freeman (25TDs to only 6 ints), each team fields better than average quarterbacks. This is before we get to record setting Super Bowl champion Drew Brees and 3 time playoff participant QB Matt Ryan. This division is stacked on offense…

However there are several questions moving into 2012. How will the Saints fare with the suspension of Head Coach Sean Peyton?? Will their game day adjustments suffer or will the overall gameplan be inferior?? Have the Panthers made enough moves to allow Cam Newton to star again or will he have a sophomore slump?? Which team was the real Tampa Bay Buccaneers?? Was it the 10-6 2010 team that was coming on at the end of that season or last year’s 4-11 debacle that got Head Coach Raheem Morris fired??

We’ll answer a few of those later in the article….as for our predictions

Now that the Saints signed Drew Brees to a long term deal: How will he fare this season without Sean Payton?? Payton and Brees have been lethal these last several years with game plans but they will suffer with game-day adjustments. There should be a drop off this season as Interim Coach Joe Vitt can’t put his stamp on the team. In a single season lame duck situation?? Not going to be good. More important, without their spiritual leader on defense with the suspension of Jonathon Vilma, this defense will give up points by the bushel and will behind in the race to win the south. As evidenced in Saturday night’s preseason game against Houston, this defense struggled in a 34-27 shootout. The Texans marched to two easy touchdowns while the starters were out there. Don’t forget the Saints were at home. How do you think they will fare when they are on the road this year?? http://www.nfl.com/gamecenter/2012082554/2012/PRE3/texans@saints#tab=recap&menu=highlights

They have a murderous schedule and will lose tie breaker advantages during the weeks of 12-15 where they face San Francisco, who beat them in last year’s playoffs. Then they face a stronger Atlanta Falcons team on the road, then travel to play the World Champion Giants in the cold, then come home to face a resurgent Tampa Bay Buccaneers team. Even though Tampa had a down year in 2011, they only lost 27-16 in New Orleans and defeated the Saints in the Superdome in 2010. At full strength with Coach Peyton, Jonathon Vilma on defense, the Saints would be in good shape against these ball clubs but with a coaching staff trying to keep the ship steady?? These are four losses waiting to happen and all to NFC teams. This is after they would have played the Packers at Lambeau in week 4, and the Philadelphia Eagle in week 9.  Too many in conference losses will doom the Saints this year.

Has there been a more electrifying rookie quarterback in NFL history than Cam Newton?? The Chancellor can only think of one and that was Dan Marino’s 1983 season. Yet a closer look and Newton broke the rookie record in week 1 with 422 yards against the Cardinals, rushed for 706 yards and 14 TDs (another record), while completing 60% of his passes for 4,021 yards (another record) and 21TDs. All as a rookie?? Yikes! That dwarfs Marino’s 20TD passes and didn’t start for Shula’s Dolphins until week 6 and was no threat with only 45 yards rushing. What is he going to do for an encore??

Once upon a time Tim Tebow was given the nod over Newton at the University of Florida. My how the tables have turned as the Panthers defeated Tebow and the Jets 17-12 last night in pre-season action.

The question is did they do enough to move up in the competitive NFC South?? They still have the “Cash & Carry” backfield of DeAngelo Williams and Jonathon Stewart, who just signed an extension last week. Ageless Steve Smith revitalized his career with Newton’s emergence and may have a running partner in WR Louis Murphy who scored in last night’s game.  On offense the answer is yes, but on defense they haven’t done enough. They did get LB Thomas Davis back but they have to keep their fingers crossed he doesn’t injure his knee for a fourth time. They need all the help they can get on a defense that was 28th last year and finished 25th against the run. In this division that last stat will be what they need to improve and the draft only brought one lineman in 4th rounder Frank Alexander. New leaders have to emerge for the Panthers to make a  move up… that can happen in 2013. The problem is it’s still 2012 so they’ll improve just a few wins on offense as a team.

Former Boise St running back Doug Martin should rush for 1,200 yards for Tampa this season.

Now a team that will be the surprise winner in this division is the Tampa Bay Buccaneers. Last year this team dropped to 30th in the NFL in rushing and brought unnecessary heat on QB Josh Freeman. Team brass addressed that with 1st round selection RB Doug Martin out of Boise St. With the rushing attack under performing it also kept the Buccaneers defense from resting. In 2011 this was a run first, pass second team that went 10-6. Josh Freeman had the second lowest touchdown to interception ratio, 25TDs to just 6 interceptions, to a record setting Tom Brady. With the acquisition of WR Vincent Jackson from the San Diego Chargers to go along with TE Kellen Winslow Jr, WR Mike Williams and WR Arrelios Benn, this team has some big targets.

Speaking of Tom Brady, the Buccaneer defense made his life miserable in pre-season action Friday night. The Bucs pass rush harassed him all night and made him throw a pick six in a 30-28 win. Brady played into the 3rd quarter (unheard of in pre-season) and New England needed 2 4th quarter touchdowns to make the score close. One of the differences was the efficient play of Freeman and Doug Martin, who rushed for 53 yards on 13 carries and sat out more than half the game. This talent who has been a Taylor Blitz Time favorite https://taylorblitztimes.com/2011/08/02/2011-heisman-campaign-doug-martin-of-boise-st/ will tilt the balance of power for them from a tactical standpoint all year. They should return to form and match the 10-6 record of 2010. They’ll be ready to make a serious move in 2013.

However 2012 will belong to the Atlanta Falcons. They have built for this season for the last four and this is the year for the payoff. TE Tony Gonzalez can’t go forever and RB Michael Turner is about to turn 30. When the Falcons lost in last year’s wildcard to the New York Giants, it marked the second season in a row their season ended at the hands of the eventual Super Bowl champions. As a matter of fact, if you include the 2009 NFC Divisional playoff loss to the Arizona Cardinals, 3 of the last 4 seasons has ended at the hands of the eventual NFC Champion. Its time for their maturation and ascend to a Super Bowl themselves. Head Coach Mike Smith and Matt Ryan have to prove they can win a playoff game. They are primed as a team talent wise to make a move.

Next up: NFC North