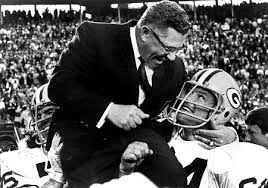 When the NFL talks about winning coaches, one name towers above all others…Vince Lombardi. He was a leader of men and motivated the Green Bay Packers to great heights in the 1960’s. His team won half the NFL championships of the 1960’s while appearing in 6 total. No team has won more than four in a decade in the modern era. Yet when folks talk about a three-peat, everyone keeps forgetting Lombardi and his Packers achieved this feat.

Think about that for a second… Chuck Noll would have had to take the 1970’s Pittsburgh Steelers to two more Super Bowls to equal that feat. Yet there is debate on who was the greater team. You have to give the edge to Green Bay because they did win three in a row. When they say no one has achieved this in the Super Bowl era, that isn’t entirely true.

The two that concluded this 3 year period were victories in Super Bowl I & II. Yet there is one season that seems to go overlooked of the Lombardi Packers…the 1965 NFL Championship team.

The 1961 Packers were known for Lombardi’s first championship. It’s the 1962 team that was remembered as Lombardi’s greatest and strongest team. Only a Thanksgiving Day ambush 26-14 loss to the Lions kept them from going undefeated. They were 13-1 while outscoring the opposition 415-148 while repeating as champions. Of course his ’66 squad won the first Super Bowl and the ’67 team was known for winning The Ice Bowl then Lombardi’s last game, Super Bowl II.

However when you go back to 1965, the Green Bay Packers were trying to re-establish themselves among the NFL elite. They had a chance to win 3 in a row after ’61 & ’62, however Paul Hornung’s season long suspension for gambling short circuited that effort. After watching the Bears and Colts win their conference in 1963 and 1964, the Packers were back to contend.  However there was a new bully on the block. The Cleveland Browns powered by Jim Brown had won it all in 1964, and were looking to repeat in 1965 to take their place among greatest league champions.

In their 23-12 victory over Cleveland, the Packers not only ended Jim Brown’s playing career on a down note, they would be the last to hold the rotating NFL trophy that moved from champion to champion. The following year was the first to be played under the merger agreement and the Tiffany Company started to produce a Super Bowl Trophy every year. Lombardi had driven his team back to prominence where they would sit atop the football world for three years. They had unseated a reigning champion to do it. That can’t be underscored.

The Ed Thorpe NFL Championship Trophy for 1965. No one knows where the one all the teams held is.

After defeating the Oakland Raiders in Super Bowl II, Vince Lombardi stepped down as coach. He had his secretary draft his resignation letter which sits in the Packers Hall of Fame: 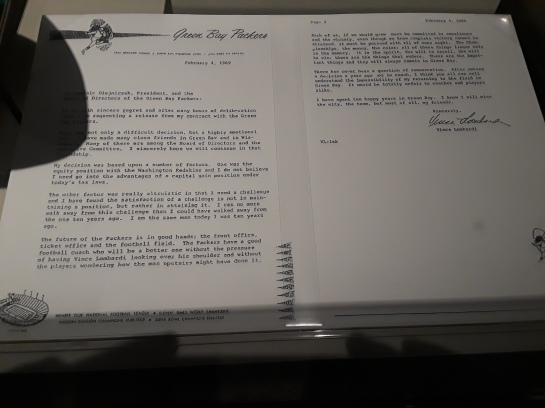 After winning 99 games in 9 years, 6 conference championships, and five world championships, how does one follow that type of success?? Most of the Packers players had mainly played for Vince Lombardi and were used to his demanding, driving spirit. Bart Starr, Jerry Kramer, Fuzzy Thurston, Ray Nitschke, Willie Davis, Forrest Gregg, and Herb Adderley had all grown up Lombardi. Now as we look back should they have replaced the Green Bay legend with a coach that was similar in temperament??

Vince Lombardi will always be seen as the gold standard when it comes to NFL coaches. One unique aspects of his tenure and times are the broken stereotypes that were forged through his career. It was thought of at the time he wouldn’t become a head coach or be successful because of his Italian and Catholic roots. It was one of the reasons he didn’t succeed New York Giant Head Coach Jim Lee Howell, whom he served as Offensive Coordinator during the championship years 1956-1958. Only once he was hired and successful in Green Bay did they try to lure him back. Ironically he beat the Giants for his first two championships. Prejudice is bad for business.

Furthermore the NFL during that time was one where black players were unable to play the “thinking” positions on defense such as linebacker or safety. There had to be a sensitivity to that plight because of the stigmas Lombardi himself faced. Although Willie Wood was unable to play quarterback in the pros, he went on to be an 8 time Pro bowl participant and became a Hall of Fame player. The same for Linebacker Dave Robinson, who was just elected to the Pro Football Hall of Fame this past February.

Ryan and The Chancellor at Vince Lombardi’s statue outside Lambeau Field 9/21/17.

One reason his legend has become so large is he passed away in 1970, just 3 seasons removed from coaching his great Packer teams. This leads to several question. He coached the Washington Redskins to a 7-5-2 record in his only season of 1969. Ironically his first season in Green Bay was 7-5 in 1959.

After his passing in September of 1970, the NFL decided to name the Super Bowl Trophy in his honor.  In such a condensed time of 9 years, his teams won 5 championships. Don Shula, the NFL’s all time winningest coach won 2 in 33 years. Tom Landry won 2 in 29 years. All time greatest coach in NFL history?? You better believe it. Of all his great teams, it’s the 1965 team that seems to be forgotten. After all they were the first in the only successful three-peat in NFL history won on the field, and is the chief reason he’s immortalized. 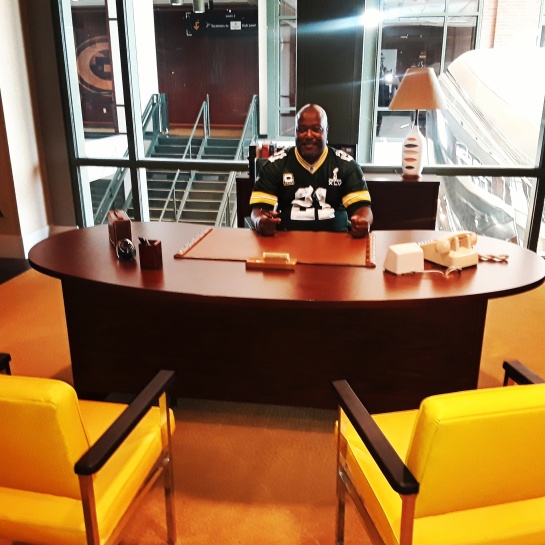 Sitting at Vince Lombardi’s Desk inside The Packers Hall of Fame at Lambeau. 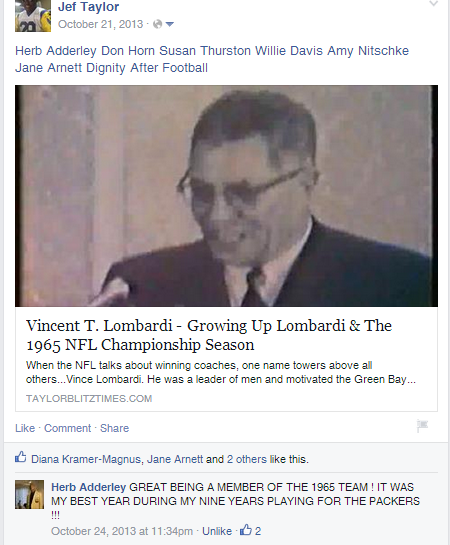