The NFL is built on the backs of great players who have made this game into an American institution. Great players have come and gone and their exploits were usually passed down generation to generation by fathers to sons, uncles to nephews, and every combination of sons and daughters you can think of.  Newspapers and word of mouth were how legends were built as the NFL emerged from the 1940’s on. That’s until television began to take over as the major story teller of the modern game. However in the last decade even television lost it’s soul for passing down stories that newspaper and families failed to miss.

Yet if you make it to an NFL game during the early portion of the season, you may run into an onfield tribute to a player or championship team from years gone by. However television execs don’t think the television audience should see it. That has to be the attitude taken as we didn’t get to see any of Ray Lewis’ tribute a month ago. Instead, we had to hear talking heads at the half talk about a game we had already spent an hour and a half watching. Seriously??

To not watch Ray Lewis tribute was glaring but wasn’t the worst example of this. That happened on Thursday Night to start week 4. The St. Louis Rams were playing the San Francisco 49ers and hosting alumni of over 5 decades of excellence. Including former players who played their careers back in Los Angeles. Men like “Jaguar” Jon Arnett. 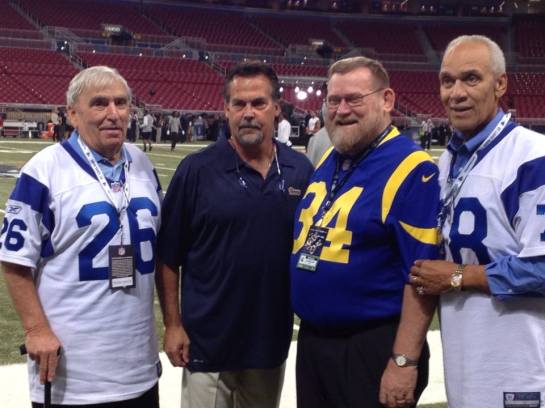 If you asked who is  Jon Arnett, you’re exactly who would have benefited from the game broadcast including the tribute to all the former Ram players. What made this painful is this was NFL Network that was broadcasting the game and not Fox, CBS, or ESPN. The NFL Network commentators would make mention when the camera would catch a former Ram on the sideline.  But only when it was an Eric Dickerson, or a Greatest Show on Turf player from the early 2000s. I can’t believe the NFL’s own network would miss that opportunity to be the catalyst to start some of those father /son stories of the men that shaped the league. 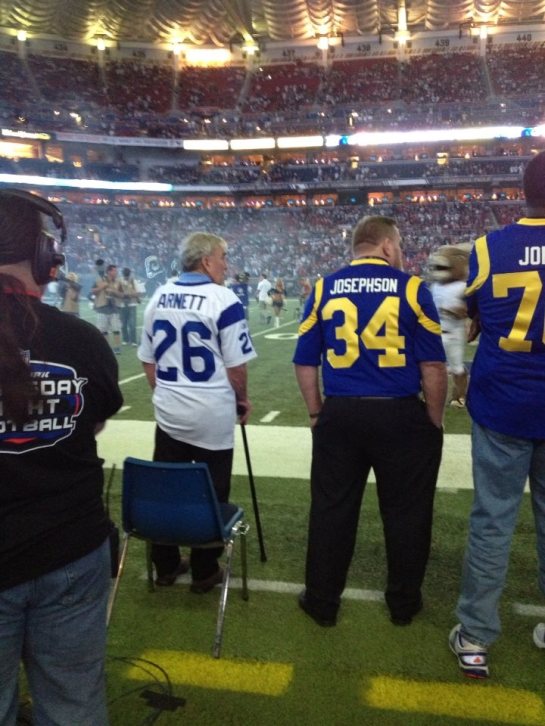 Some of the Ram alumni on the sideline during the Rams v. 49ers in week 4.

As the NFL has gone more corporate, it hasn’t cared about the players who built the league and fight for their benefits later in life. Yet these are proud men whose accomplishments and contributions shouldn’t be swept into the dustbin of history. How do we know this??

Well let’s take you back to the turn of the century. No, not 1900, I’m talking about 2000. Twice on Monday Night Football we were offered retirement ceremonies for both Dan Marino, and John Elway. ABC allowed the viewer to enjoy what fans in Joe Robbie, and Mile High Stadium were able to witness. How many stories were told those nights to young football players around the country?? How many of today’s NFL players had fathers, uncles, or grandparents, share stories of Elway and Marino on those nights?? 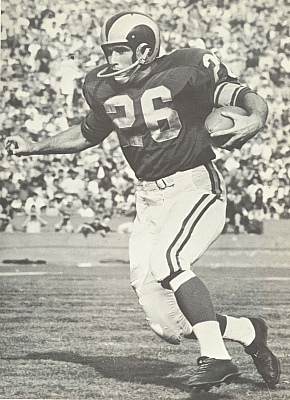 An all purpose threat for the Los Angeles Rams and later the Chicago Bears, Arnett was a 5 time Pro Bowler. Worthy of the Pro Football Hall of Fame, Arnett has been a friend to Taylor Blitz Times since it’s inception. I call him “Captain Cutback” and he was right behind Frank Gifford in the lineage of great USC tailbacks.

ABC did this again before the 2001 season when Terrell Davis had his retirement ceremony live before a televised audience. Before that we had Phil Simms throw a pass to Lawrence Taylor during his retirement ceremony in 1995. Also on Monday Night. it was understood what it meant to share the games history and aid in story telling that inspired the next generation of football players. Now even the NFL’s own network doesn’t even recognize this.

They robbed some little boy or girl of watching the pregame / halftime ceremony of former Ram players and ask: “Dad, who is that guy in the white jersey?? You know #26 right there??”  just before his father could answer, his uncle or grandfather would walk in with a beer and a bowl of chips and respond “That’s Jaguar John Arnett…and you should have seen him play. He was the most elusive….

If the networks won’t stop and offer something more rewarding than studio analysis of a game we have watched for nearly 2 hours. To hell with it, Taylor Blitz Times will do it.  Shut up and let us see the ceremonies in the stadium…please.