There are many NFL fans who miss true talents around the league and just focus on their team. That narrow focus can keep one from seeing a Hall of Fame talent at work. That doesn’t mean an overlooked player should miss the call to the hall if he doesn’t garner great media attention. It’s about what they accomplished on the field and how well their peers respected their exploits.

Dillon was a violent runner.

Did you know that at one point Corey Dillon owned the greatest single game rushing performance and the #6 performance in NFL history?? Not Emmitt Smith, Barry Sanders, Eric Dickerson, LaDanian Tomlinson, nor Adrian Peterson or any great back you’ve ever watched accomplished that . Well, you have to be in your mid fifties at least to say you saw someone perform to that high a level. That was when OJ Simpson held sway in the NFL. You’d have to be in your fifties!!

Not only that, his 6th place (at the time) performance stood as the NFL’s rookie rushing record at 247 yards in a 1997 game against the Tennessee Oilers. That record Dillon broke had been Jim Brown’s. Each of these have since been broken but it was the manner in which they were set that sets them apart.

Unlike the shifty make ’em miss running style of most halfbacks, Dillon struck like the hammer of Thor. He was a passionate violent runner that thrived on contact. Once he positioned a defender to one side, he’d forearm, stiff-arm, or shoulder right through them. He made a joke of arm tackles and if you wanted to tackle him, your heart had better be in it.

Dillon’s passion led to frustration as the Bengals piled up losses.

For years media pundits painted him with the broad brush of that of a malcontent. Yet let me ask: If you were one of the best talents in the league, how frustrated would you be with a team that couldn’t get you any help?? In 1999 Inside The NFL broadcast their show from Cincinnati asking “Why can’t the Bengals tun it around?? Were they the JV of the NFL??” They interviewed player after player and the only one whose eyes burned fire with frustration were Dillon’s.

For an instant you could peer into his soul and you understood him completely. For all the hard work to make it to the NFL, then play for a franchise that couldn’t field a better team. He was toiling in anonymity loss after loss. All those childhood dreams of playing in a Super Bowl were dying an agonizing death.

It looked like 2000 would be no different as the Bengals started out 0-6. They had only scored 34 points while being shut out 3 times when the Denver Broncos, just two years removed from back to back championships, came to town. The heavens opened up and the football god’s touched Dillon, allowing his fury to be unleashed in the greatest rushing display in NFL history.

Inside The NFL Perspective:

Did The Chancellor of Football say the greatest rushing display in the history of pro football?? Absolutely!! Listen, on a day when the Bengals completed just 4 passes, Dillon got off on a defense focused squarely on him. As for the record of 278 yards being broken twice by Jamal Lewis and Adrian Peterson, we will put them side by side in a minute. You have to remember the football world was still reeling from Walter Payton’s death. We were just 1 week short of the 1 year anniversary of his passing. As for the record comparison:

However a closer look and Corey lost 6 yds on 6 of his carries. So in essence he ran for 284 yards in 16 carries or 17.75 yards per rush!!! Yikes!!! Best in history by a wide margin… It was Corey who wiped Jim Brown and Walter Payton from the record book, proving to a generation those records weren’t unbreakable. Payton’s record had stood for 23 years.

Dillon finished the 2000 season with a team record 1,435 yards rushing. Don’t forget he had two games against the  record setting Super Bowl champion Raven’s defense that ranked #2, and two more vs. Tennessee’s ranked at #1. What would he have done had he played in a less stout division defense-wise??

What would he have done behind a line like the Dallas wall with Larry Allen??

In 7 years he only played once with a Pro Bowl lineman.  That was T Willie Anderson in 2003. By then he was splitting time with Rudi Johnson. In that same year Chad Johnson (Ocho Cinco) made the Pro Bowl. Other than that he played with NO Pro Bowl players for all that time. In those circumstances he ran for 1,000 yards in 6 of 7 seasons. In stark contrast Emmitt Smith’s line had 16 Pro Bowl Linemen and TEs between 1991-1995 alone. But alas he was traded to the New England Patriots for a second round pick when he failed to rush for 1,000 in 2003.

What did the Patriots get??

Try the driving force for their back to back championship season of 2004. He wasn’t just a member of that team. Dillon ran for a Patriots team record 1,635 yards and 13TDs & was the closer for the best of the three champions in their dynasty. He had 9 100 yard performances that year and the playoff clinching win came against Cincinnati. Where he received the game ball from Bill Belichick.

The Patriots went on to win Super Bowl XXXIX 24-21 which validated the career of Corey Dillon. For his career he rushed for 11,241 yards and 82 TDs. Dillon is one of a select few to set the franchise record in rushing for multiple teams. As the argument heats up about the candidacy of other power runners like Eddie George and Jerome Bettis, neither showed the exhibition of power and speed Dillon displayed. Not to record breaking levels. He had 7 1,000 yard seasons and was a world champion. What could have become of Dillon’s career had he more talent around him?? 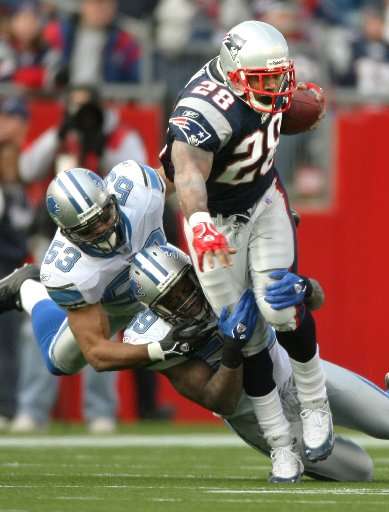 One of history’s best power runners.

For induction into the Pro Football Hall of Fame, I present to you Corey Dillon.

7 thoughts on “Corey Dillon Belongs In The Hall of Fame”