From time to time you’ll find NFL teams trying to recreate what they once had and totally undervalue a current player on their roster. Never was this more evident than when the San Diego Chargers overreached for a big back to replace the aging Chuck Muncie. At first they signed late Ricky Bell who couldn’t stay healthy. Then they made one of the worst trades in NFL history, trading the multifaceted James Brooks to Cincinnati for FB Pete Johnson. 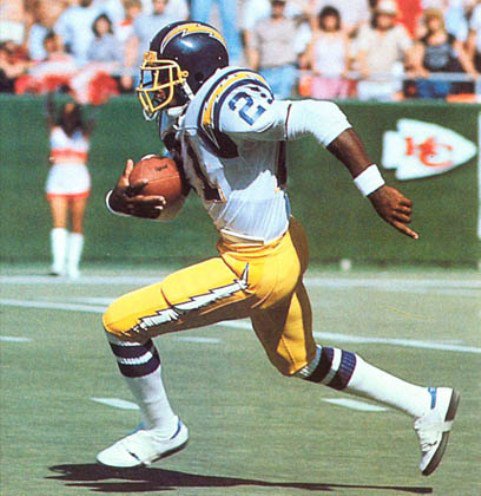 James Brooks burst onto the NFL scene in 1981 out of Auburn.

How lopsided was that trade in 1984?? Pete Johnson only played 3 games with the Chargers before being released. Brooks went on to play 8 seasons for Cincinnati gaining 9,459 combined yards and 64 touchdowns. During that time he ran for 1,000 yards on 3 occasions while compiling 5 seasons with over 1,200 yards from scrimmage. Not only did he make the Pro Bowl 4 times, he broke Johnson’s all time team rushing record and helped the Bengals to Super Bowl XXIII.

Although they brought in another Auburn tailback in Lionel James, this was the end of the Air Coryell reign. Age and injuries derailed their effectiveness where Brooks played on with the Bengals through the 1991 season. Why would you trade a proven commodity that led the league in all purpose yards in his first two years?? One could speculate how Chargers ownership under Gene Klein was dreading impending contract demands. Don’t forget this was only 3 years removed from trading away WR John Jefferson and DE Fred Dean for the same thing. 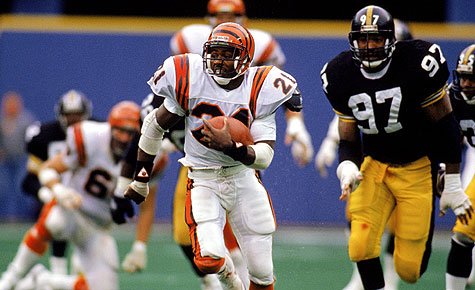 Brooks was one of the toughest and most durable runners at 180 lbs in NFL history. His game was a speed game but he broke tackles when he ran inside traps. He took on linebackers and safeties. His best run ever was a 56 yard TD run against the Patriots in 1986 in which he broke several tackles and drug SS Roland James into the endzone.

James Brooks was a great performer whose numbers will fall just short of Hall of Fame consideration. His trade stands as a cautionary tale to GMs everywhere. He was one of a long line of Auburn running backs that came into the NFL starting with Joe Cribbs, himself, Lionel James, and Bo Jackson during the 1980’s. Yet it was Brooks who out rushed them all.

7 thoughts on “Legends Of the Fall: James Brooks”