When Malcolm Smith crossed the goal line to put Seattle up 22-0 in last February’s Super Bowl, pundits were already arguing where they ranked among the NFL’s greatest defenses. Here at Taylor Blitz Times we wanted to let some time pass before we waxed too philosophical about their exploits. As the keeper of the flame, it’s up to The Chancellor of Football to accurately place each great defense. We will do this in 3 parts. 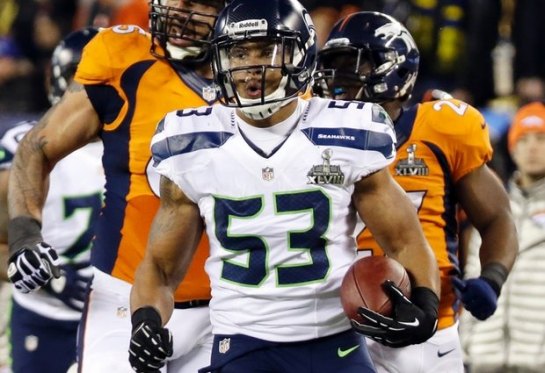 Smith’s 69 yard interception in Super Bowl XLVIII ended the competitive phase of the game and trumpeted the question: Where would you rank Seattle’s defense with  the all-time greats??

One of the criteria for greatest ever defenses you have to ask is: How dominant were they at their peak? They had to bring the lumber over an entire season. These defenses had to be stout with a performance that stands the test of time in remembrance. Without further adieu we have to get on with the Honorable Mention. Those right outside the top ten.

1977 Denver Broncos – The original Orange Crush defense that led the Broncos to Super Bowl XII and Denver’s first ever winning season. This was the first great full time 3-4 defense that yielded only 148 points (10.6 pts / game) and just 18 touchdowns for the season. Holding 7 of their opponents to 10 points or less. 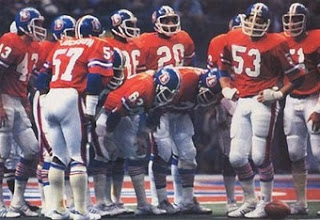 Even with an offense that turned it over 8 times, the still held Dallas to 27 points in Super Bowl XII.

Led by Randy Gradishar, ESPN’s Tom Jackson, and the late Lyle Alzado this defense had an unheard of 4 All Pros concentrated on this defense and 5 Pro Bowlers. This not ready for primetime group came out of nowhere and swallowed the Steelers and Raiders in the playoffs before falling to Dallas in New Orleans in Super Bowl XII. This group swarmed like bees and ushered in the era where 3-4 defenses took over the NFL.

1978 Pittsburgh Steelers – In the first year in which the NFL moved to a 16 game schedule, this group set the new record with fewest points allowed in a season with 195. Powered by the Steel Curtain, they held 8 of 16 opponents to 10 or fewer points. This group did more blitzing than in years past to get to the quarterback. They did have 5 Pro Bowl defenders and 1 All Pro in Jack Ham, but there were stronger incarnations of the Steeler defense.

A fact that gets lost is going into Super Bowl XIII, the consensus was Pittsburgh force vs the finesse Cowboys. Yet it was Dallas whose defense was ranked #2 and Pittsburgh’s #3, For the season they yielded 260.5 yards per game, unofficially had 52 sacks and 27 interceptions which ranked 7th. They peaked in the playoffs holding both Denver and Houston to 10 points and 5 points respectively. Yet gave up some serious candy to the Dallas offense (320 yards & 31 points)

1968 Baltimore Colts – The team that is best known for coming up short in Super Bowl III against the AFL’s New York Jets. In The Chancellor of Football’s estimation, this was the best team that Don Shula ever coached and one of his defensive assistants was the late Chuck Noll. This defense held 10 of 14 regular season opponents to 10 or fewer points. At one point late in the season, they gave up 1 touchdown over 25 quarters including a string of 16 straight quarters w/out a touchdown allowed. 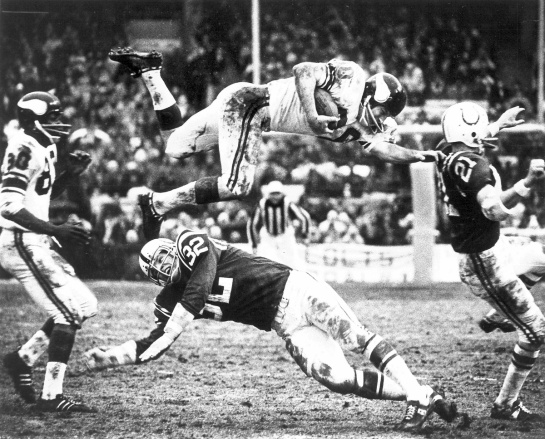 2000 Tennessee Titans – Lost in the delirium over the great 2000 Ravens defense, is the fact they finished #2 to the Titans that year in rankings. Jeff Fisher’s bunch only allowed 238.9 yards per game and held 6 opponents to 10 points or less over the campaign.

Second year DE Jevon Kearse led the team with 11.5 sacks and 4 forced fumbles. Samri Rolle had 7 interceptions he returned for 140 yards and a touchdown. SS Blaine Bishop had 84 tackles to go with 2.5 sacks but 0 interceptions. All three were Pro Bowlers but only Samari was an All Pro Player. One issue is they didn’t force enough turnovers (29) and they finished just +1 in turnover ratio. These are poor marks considering they only saw 1 Pro Bowl quarterback the entire season. Yet they were #1 against the pass (151 yds /gm) and #3 against the run (86 yds /gm).

1987 San Francisco 49ers – One of the last teams to finish with the NFL’s #1 offense and defense happened with this group in 1987. They were gaining momentum allowing only 1 touchdown in the final 16 quarters of the season and none in the final 12 as the playoffs beckoned. They held 5 opponents to 10 or fewer points including two shutouts in their final three games. One of which was a 41-0 hammering of the NFC Central Champion Chicago Bears on Monday Night Football.

Led by All Pro and Pro Bowler Ronnie Lott (5 ints) this group was #1 against the pass (165 yds /gm) while only yielding 273 yards for the game. What makes this more remarkable are 3 games were played with replacement players due to the strike. Had the season been 16 games instead of 15 and no strike, these numbers could have been even better. They were also #5 against the run (107.4 yds / gm) thanks to All Pro and Pro Bowl Nose Tackle Michael Carter. 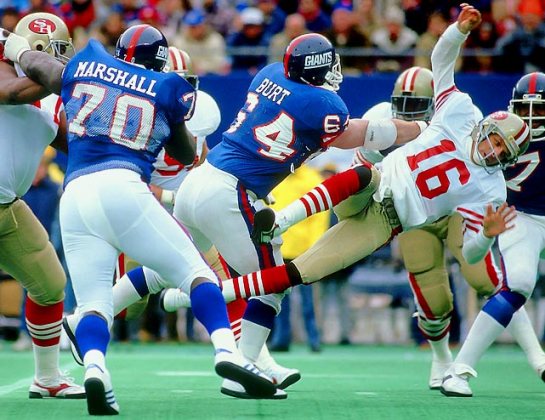 Jim Burt knocking Joe Montana out with a concussion in their 49-3 rout in the ’86 playoffs.

1986 New York Giants – A romanticized defense that knocked 5 quarterbacks out on their way to the Super Bowl XXI championship. Yet they were #2 in 1986 and allowed 39 more yards per game than the #1 Chicago Bears with 297.3 yards per game. Second biggest discrepancy between #1 and #2 since 1970.

Led by League MVP and Defensive Player of the Year Lawrence Taylor’s 20 sacks, New York held 5 teams to 10 points or fewer during the regular season. They held their 2 NFC playoff opponents to 3 & 0 points respectively. There were 4 Pro Bowl defenders on this defense in LB Harry Carson, NT Jim Burt, DE Leonard Marshall, and the aforementioned LT.

2008 Pittsburgh Steelers – Close but no cigar. This team finished with the #1 ranking allowing just 237.2 yards per game. They held 8 opponents to 10 or fewer points yet gave up 223 for the season. One mark against them is they only faced 2 Pro Bowl QBs and lost both games. Losing 24-20 to Peyton’s Colts and 21-14 against Eli’s Giants. This was also the year they beat the Patriots 33-10 with Matt Cassel at QB not an injured Tom Brady. Big difference. This group had 51 sacks but only 20 interceptions. The last time we saw them, Kurt Warner passed for 377 yards, 2nd highest in Super Bowl history, and needed Big Ben to bail them out with a game winning pass with :32 left.

This group did have NFL Defensive Player of the Year James Harrison and Pro Bowl SS Troy Palamalu who would win the award 2 years later. Harrison had 16 sacks with 7 forced fumbles. James Farrior (122 tackles) was the 3rd and final Pro Bowler on a talented roster which included LaMarr Woodley (11 sacks).  They were a world champion but this group didn’t perform high enough against the best competition. The top ten is a Sugar Ray Leonard’s list, the honorable mention is where Thomas Hearns resides. 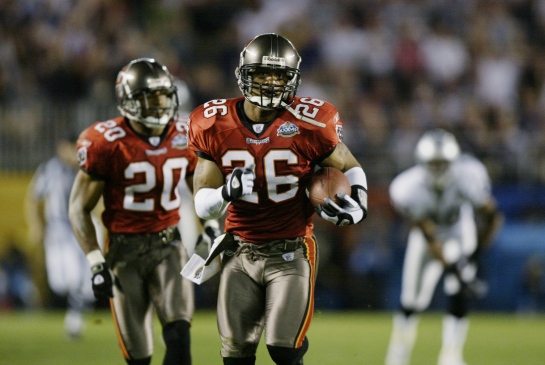 Dwight Smith capped off Super Bowl XXXVII with 2 defensive touchdowns. Should have been the MVP.

2002 Tampa Bay Buccaneers – The final team to miss the call to the top ten was the 2002 Buccaneers. The undisputed #1 defense that year. However playing in the new NFC South they feasted on patsies. On 3 occasions they took on top 10 offenses and they lost two of those games to Philadelphia (10th) and Pittsburgh (5th).

This team yielded 252.8 yards per game had 43 sacks and 31 interceptions which ranked 6th and 1st respectively. This team only gave up 196 points while holding 9 regular season opponents to 10 or fewer points. However a closer look reveals they came against offenses ranked 26th, 18th, 14th, 23rd, 31st, 31st, 12th, 14th, and 29th. Chris Redman (who??) quarterbacked the Ravens who was the first in this group. While NFL journeyman Jim Miller led the Bears in the last game.

This team fielded 5 Pro Bowl players in NFL Defensive Player of the Year Derrick Brooks, Shelton Quarles, Hall of Famer Warren Sapp, Simeon Rice (15.5 sacks), and S John Lynch. This group scored on defense. Brooks tied the NFL record with 4 defensive touchdowns and CB Dwight Smith set a Super Bowl record with 2 interception returns for touchdowns. Their numbers and performance should get them in until you look at the competition. Someone reading this is going to describe how they throttled the #1 Raider offense in the Super Bowl. Yet how much do you attribute to Monte Kiffin’s defense or Jon Gruden knowing the Raider offense and personnel??

Thanks for reading and now its time for the top 10.