After watching last night’s obliteration of the New England Patriots, it’s time grade this team. Did we really just watch Tom Brady get benched?? Last night just looked strange seeing Belichick and Brady on the business end of a 41-14 bludgeoning. However when you looked around, there are no other playmakers on this team. 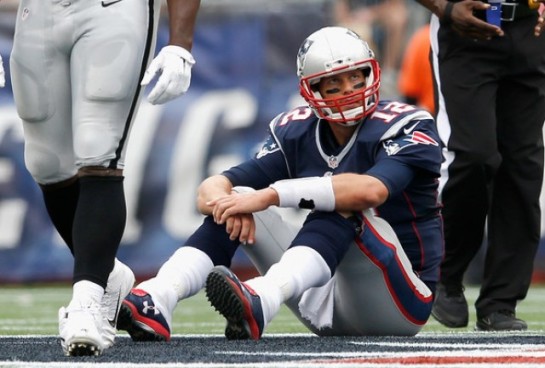 Of course you don’t want to overreact to 1 game but we have now played 4. A quarter of the season is a good enough sample size to assess how a team is doing and project how they will do. So far Brady has been sacked 9 times but he’s been hurried and hit many more. The offensive line has been shuffled and one glaring front office decision is truly haunting this team.

Remember when the Patriots didn’t re-sign Wes Welker and decided to waste $31 million on Danny Amendola?? We’ll get into that but…how do you pay that to a marginal receiver who was once cut on Hard Knocks?? Do you realize New England has the NFL’s 29th ranked offense?? Only Tampa, Jacksonville, and Oakland have been more anemic. Right now the Patriots are ranked 30th passing the football…30th!!

The glaring lack of receivers to get deep is killing this team. Concentrate your defense 20 yards or less and you can bottle them up. Denver did this in the AFC Championship Game and it’s the blueprint opponents have used ever since. New England has averaged 20 points while facing the 7th, 17th, 20th, and 11th ranked defenses in this 1st quarter of the season.

Now they go home to face the undefeated Cincinnati Bengals who boast the 14th ranked defense. Two things to keep in mind though. Brady and company could only muster 16 points at home against the 20th ranked Raider defense a few weeks back. Another is the Bengals held New England to their lowest output of the season last year with just 6 points.

The surprising part of last night’s loss was how gashed the Patriots 4th ranked defense was. They nearly gave up two 100 yard rushers in Jamaal Charles (92 yds) and Knile Davis (107 yds). Keep in mind one of their 2 wins came against the Raiders who are not only dead last on offense, but just fired head coach Dennis Allen.

This Sunday is a must win game against Cincinnati. They need to prove to themselves they are still among the league’s elite. If they lose this game they’ll have to travel to Buffalo with a 1-2 road record and 2-3 record overall. The Bills boast the 10th best defense in football right now. Of course some will scoff “Didn’t the Bills just bench their quarterback?”  Which is true. However with just 4 touchdowns so far this season, isn’t that what New England did to Tom Brady last night??  These are interesting times.