Super Bowl XXI Giants 39-20 over the Broncos.  I was one of those that was all set for the Bears to repeat as champions …yada yada yada….who’s got the ring?  On the way out to Pasadena, they blew out The Team of the 80s 49ers 49-3 in the divisional playoff. The NFL’s worst playoff beating of the decade. Then shut out division rival Washington 17-0 for the NFC Championship. Are you kidding?? They came through the playoffs with a combined score of 66-3. Talk about dominant.

So they were off to Super Bowl XXI in Pasadena’s Rose Bowl. There is something about the Super Bowl being played in the Rose Bowl. It just has a regal look and feel to it. 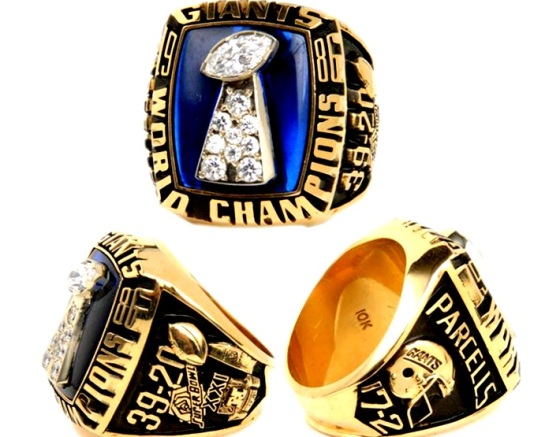 When the Giants mauled (dont know if thats a strong enough adjective) the 49ers 49-3 in the NFC Divisional Playoff, you knew the Washington Redskins were going to be in deep trouble in the championship round. Sure they had upset the Bears but that was with 3rd or 4th string QB Doug Flutie.  I don’t ever like to say in sports that it was over but you would have had to field an all star team to stop them because they were comin’!!

Hosting the NFC Championship, a fierce swirling wind became the story of the game. The Giants won the coin toss and took the wind. The Redskins couldn’t run and came out to 3 straight 3 and outs. Subesquently they had 23, 27, and 28 yard punts into the wind which led to the Giants playing on a short field. They took a 17-0 first half lead and the game was over.

Hall of Famer Lawrence Taylor,was not only the NFL’s Defensive Player of the Year, he was league MVP also. In his prime and comin’ off the corner, he just terrorized opponents. It was only the second time a defender was NFL MVP. The first?? Alan Page of the Minnesota Vikings in 1971. He had his greatest season with 20.5 sacks and countless plays where he ran down runners from behind on the line of scrimmage. The play he chased Reuben Mayes of the Saints from behind… yet I digress

Other hatchet men on that defense?? All Pro Leonard Marshall at DE had 12 sacks that year & nearly beheaded Jay Schroeder on one sack in the NFC Championship.  Pro Bowl NT Jim Burt held down the middle and knocked Joe Montana out cold in the divisional playoff.  Carl Banks totally owned the strong side dominating opposing TEs.

Crafty George Martin, Harry Carson, Gary Reasons formed a formidable defense and get this:  With all this talent and being the leagues #2 defense in 1985, they drafted LB Pepper Johnson (5 rings player and coach) CB Greg Lasker, DE Eric Dorsey, NT Erik Howard, and CB Mark Collins in the draft!  Collins was the reason the Giants could handle the 49ers for the next 7 years because he shut down Jerry Rice better than any corner over Rice’s career.

This is before we even get to Phil Simms or Joe Morris who ran for 1,516 yards and 14TDs that year…but really that defense at its peak was just frightening.