There are several teams that have their best talents go unrecognized by the Pro Football Hall of Fame. The prevailing theme that has emerged are the lack of members from franchises that haven’t won a Super Bowl or an NFL championship in their existence. Even those that compiled impressive numbers during their careers. Enter Ken Riley of the Cincinnati Bengals.

Riley was drafted by the Cincinnati Bengals in the last year of the American Football League in 1969. He teamed with fellow CB Lemar Parrish and FS Tommy Casanova to form one of the best secondaries of the 1970’s. Over a 15 year career ending in 1983, Riley intercepted 65 enemy passes. Good enough for 4th all time at the time of his retirement, and still ranks 5th just behind Rod Woodson.

A quiet player drafted out of Florida A & M, his career was overshadowed by other teammates and playing in a small market in Cincinnati. There were only so many Pro Bowl votes to go around. Many of those went to teammate Parrish with 8 who was also one of the league’s best punt returners… we’ll get back to this.

From 1974-1978 the Bengal defense ranked 4th, 2nd, 3rd, 6th, and 3rd against the pass. The “Soul Patrol” Raider secondary of Jack Tatum and George Atkinson never yielded less yards than this group. The Steelers only outranked them once in ’74, when they were ranked #1. Keep in mind in ’75 & ’76 the Steel Curtain had two of our greatest ever defenses and Cincy was better against the pass.

As for Pro Bowl voting during this time, Parrish who deserves Hall of Fame consideration in his own right, was a mainstay. However Riley was the better pass thief. Riley pirated 22 enemy passes to Parrish’s 6 during the time ’74-77. In fact you’d have to combine all their years together dating back to 1970 to get Parrish in the race with 23 interceptions. However Riley’s number balloons to 36 when you do that.

The biggest Pro Bowl snub came in 1976 when teammate Parrish made it to LA and Riley stayed home. Riley was 2nd in the league with 9 ints which were returned for 141 yards and a touchdown. Parrish and fellow AFC Pro Bowl CB Emmitt Thomas only had 2 respectively. Are you serious?? How does this happen?? Let’s take a look back…first at Riley, then his exploits in one of the finest secondaries in NFL history.

They were the best secondary of the 1970’s. Maybe it was going against Bill Walsh and what would become the “west coast offense” everyday in practice that made them great? Walsh was Cincinnati’s Offensive Coordinator at the time and had Ken Anderson who won passing championships during this time in 1974 & ’75.

What The Chancellor of Football remembers most about Riley was his flawless backpedal. He was a tactician that used the sideline as his friend and was never out of position.

Once Parrish was dealt away to the Redskins and Tommy Casanova retired to attend medical school in 1978, Riley played on in the Bengal secondary. He played through 1983 when in his 15th and final season, was 2nd in the league with 8 interceptions. Most players would have dwindling stats that late in their careers. Riley had a combined 18 interceptions in his final 3 years alone and was 1st team All Pro in his last year.

Did you know Riley never made the Pro Bowl during his career?? However he was voted All Pro in 1975, 1976, 1981, and his final season in 1983. Something has to be said about that type of sustained excellence. Of the top ten interceptors in NFL history, only he and Hall of Famer Dick Lebeau did so for the same team throughout their career. He’s the only corner to have 7 seasons with 5 or more interceptions totaling 65 over 15 years.

Keep in mind it took Darrell Green 20 years to garner 53 interceptions. Hall of Famer Deion Sanders needed 14 years to net 53 picks and Lester Hayes needed 10 years to snatch 39. None of these guys came close to matching the 18 Riley had in his final 3 seasons during their careers.

To circle back, It was interesting the sporting press and coaches made sure Riley made those 4 All Pro teams when there wasn’t space on the Pro Bowl roster. Was Riley overshadowed by Parrish being one of the league’s best punt returners? Over the years corners who starred as return men seem to have a blurring of their special teams exploits and defensive play that collect in the memory. Which could have affected Pro Bowl voting. The NFL didn’t expand to include a special teams player until the 1986 season.

One item shared by Todd Christensen’s son Toby a few weeks back was this plauqe given to the players who made Pro Football Weekly’s All Pro Team for 1983. 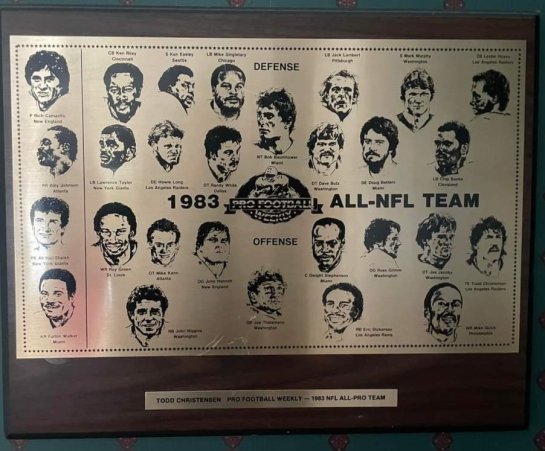 When was the last time you saw an NFL cornerback finish his 15 year career as an All Pro? Check the top left… Riley and Lester Hayes.

Just like there is little footage of the Cincinnati Bengals of that era, there just isn’t a lot out there on Ken Riley. He was a great cornerback that played in a time before they expanded Pro Bowl voting to include more players. Yet you can’t take away his numbers. Aside from Hall of Famer Dick “Night Train” Lane no pure cornerback intercepted more passes.

For induction into the Pro Football Hall of Fame, I present Ken Riley.

Well well...well: I think The Chancellor of Football knew something writing why Jalen Hurts should be the 2nd to Joe Burrow in the NFL 2020 draft, where ESPN and Athlon sports had Nate Stanley, Jake Fromm, Justin Herbert, Jordan Love, Jacob Eason, and Tua Tagovaila (too small for NFL ball).Taylor Blitz told you why to pick him also. Taylor Blitz also told you he would take the job from Carson Wentz in season a month before it happened in another article.
Pssst... when it comes to 2nd halves between KC and Cincy #bengals #chiefs #joeburrow #patmahomes
Greatest Ever Defenses... #2 -2000 Ravens
Courtesy of the Black College Hall of Fame on display in the Pro Football Hall of Fame... The "Roos" the late Walter Payton was wearing when he passed Jim Brown to become the NFL's All time leading rusher back in 1984. Richard Dent's game ball from Super Bowl XX #taylorblitzarchive #HBCUs #JacksonState #TennesseeSt #WalterPayton #RichardDent #keepthebearsinchicago
Tell The Truth Tuesday: Taylor Blitz was even the first to suggest he would take Carson Wentz's job months before he did. Even with a former Eagle telling me I was crazy for suggesting it. LOL Well... The Chancellor nailed that one too with Jalen Hurts
Tell The Truth Tuesday: When the Philadelphia Eagles win the NFC Championship Sunday the national media Super Bowl stories will start and begin with Jalen Hurts. Didnt Taylor Blitz Times step up to the plate and say why he was a better draft choice than Nate Stanley (who?) Jacob Eason, Jake Fromm, Tua, and Jordan Love where Athlon and ESPN had Hurts 8th or worse??
Loading Comments...