Former San Francisco 49er Head Coach Bill Walsh referred to the early years of the organization’s coming of age as “Camelot”. After the 1981 Super Bowl championship they would go on to become “Team of the Decade” winning another 3 titles. San Francisco became the NFL’s gold standard in on field achievement and the corporate way they conducted themselves. 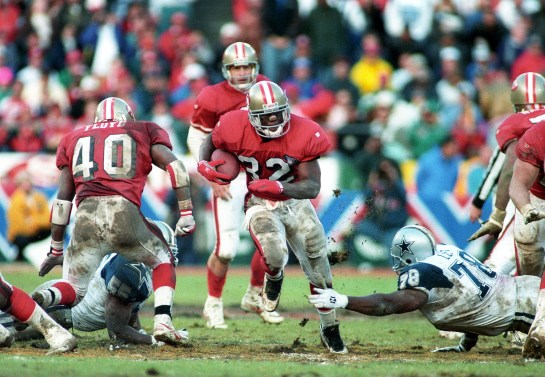 Their players were revered as Joe Montana, Jerry Rice, and Ronnie Lott took their place among the league’s greatest ever players. They had been the toast of Presidents as the 80’s drew to a close. In 1989 new Dallas Cowboy owner Jerry Jones traveled to San Francisco to learn from Eddie Debartolo how the league’s model franchise did business. This was nothing new as even former Head Coach Bill Walsh had become a favorite on the corporate motivational speaking circuit.

As the 90’s beckoned, the team was transitioning on the field as Steve Young, Ricky Watters and a new wave of 49ers emerged. It started with a team loss in  the 90 NFC Championship to the New York Giants 15-13 ending their chance at a 3-peat. Gone were 80’s holdovers Montana, Roger Craig, and Lott as the new generation took shape in 1991. Montana from a vicious hit that kept him out of football for two years. The others were released as the team looked to get younger to stay competitive.

They finished 10-6 as Steve Young finished his first season as a passing champion. It took awhile for San Fran to find their footing yet they finished on a 6 game winning streak. By 1992 the Niners hit their stride finishing 14-2 and retooled with Ricky Watters rushing for 1,013 yards to join Young, and Rice in the Pro Bowl. Another passing title moved Young into the elite of the sport yet it came crashing down with a loss to the upstart Dallas Cowboys in the NFC Championship 30-20.

Steve Young being sacked during the 1992 NFC Championship Game.

Yes, those same Dallas Cowboys who had studied the 49er organization some 4 years before. The same Jimmy Johnson and Jerry Jones who had traded for former 49er Charles Haley to help lead the upstart Cowboys and shift the balance of power. Haley had grown up a 49er and battled T Steve Wallace, G Guy McIntyre, and G Harris Barton for 6 years in practice. His experience and spirit settled the nervous young Cowboys in their ’92 NFC Championship triumph.

Going into the game it was a 50/50 split as to who had the upper hand. What really hurt Steve Young is a now healthy Joe Montana watched from the sideline. As San Fran fell behind in the second half, a growing feeling in the stadium loomed. Would George Seifert put Montana in if the game got away from Young. Even though Young was the NFL’s MVP, he still had the legend looking over his shoulder. As the event drew near it felt like a defining NFC Championship was taking shape. The excitement leading into the game reached a crescendo when…

What if Guy McIntyre doesn’t get called for holding on the game’s 3rd play negating Jerry Rice’s 63 yard TD from Young?? It would have changed the complexion of  the game. However Troy Aikman had gone 24 of 34 for 322 yards and 2TDs. Troy Aikman outplayed him and made several signature throws to Alvin Harper while Young threw 2 4th quarter interceptions.Emmitt Smith controlled the clock with 114 yds rushing and 59 yds receiving. They took the measure of San Fran and became the league’s signature team with their Super Bowl XXVII championship.

Going into 1993 the 49ers had traded away Joe Montana making it Young’s team. This added pressure from the fans but their real battle was catching Dallas who was now an established champion. They were brash and played with an in your face bravado that took the 49ers aback. In the locker room following the ’92 Championship, Jimmy Johnson’s boast “How ’bout them Cowboys!?!” reverberated in the CBS cameras & throughout Candlestick Park. It haunted the organization as they set their sights on dethroning the loud, brash Cowboys.

Once they qualified for the NFC Championship rematch in Dallas, it was time to right the ship. Dallas had beat them 26-17 in the regular season to add to their confidence. Then Cowboy coach Jimmy Johnson dropped a bombshell.  He called a Dallas radio station and declared “We will win the game and you can put it in 3 inch headline!” Now they were calling San Fran out and how would they respond??

Called out and humiliated like an after school fight in 6th grade, the 38-21 loss in the ’93 NFC Championship was worse than it looked. Dallas was up 28-7 in the 2nd quarter and was sitting on the ball with 3:27 to go. The defense, which had struggled all year, was completely exposed. The gap was widening and the team needed to make drastic changes if they were going to compete with the younger Cowboys.

Michael Irvin had emerged as one of the best wide outs in the NFL. Emmitt Smith had the last 2 rushing titles and had his 3rd straight 100 yard rushing game against the 49ers. Troy Aikman had yet to throw an interception in 2 NFC Championship games. Alvin Harper was becoming a serious 49er killer as he emerged with the highest yard per catch average in postseason history. Most of it due to huge plays against San Fran.

Carmen Policy and the 49ers brass moved into swift action. Back then the team that lost the conference championship coached the Pro Bowl squad. Free agency had come to the NFL the year before and they used this as a recruiting trip. They signed future Hall of Famers Rickey Jackson, Richard Dent, Deion Sanders off the NFC Pro Bowl squad. Then stole Ken Norton Jr from the Cowboys and DE Charles Mann all fom the ’93 Pro Bowl.

Floyd and Watters celebrate touchdown during their 44-15 demolition of Chicago in the ’94 playoffs.

“If you can come in and give us the defense, we have an offense that can dethrone the Cowboys and get to the Super Bowl.” They also knew they needed a new approach psychologically and embraced a more brash, in your face swaggering persona. Spearheaded by the outgoing personalities of Ricky Watters, Deion Sanders, and rookie FB William Floyd.

Gone was the laced up corporate attitude of the team on the field. This group showed its emotions on the field, celebrated with end zone dancing and Deion highstepping downfield after interceptions. The only thing that made the 49ers recognizable were their helmets. Thanks to the NFL commemorating their 75th season, the Niners elected to play most of the season in their “throwback” uniforms of the 1950s. The 49ers were reborn in 1994.

It worked as the 49ers blew through the regular season 13-3 and scored a team record 505 points. Steve Young was league MVP and Sanders was the NFL’s Defensive Player of the Year. They retooled and had specific match ups ready as they eyed the defending champion Cowboys. They beat them during the season 21-14 to earn the right to homefield advantage for the ’94 NFC Championship. If the Cowboys were going to 3peat, they had to go through the last team that had that same chance just 4 years before.

Sanders impact on the Conference Championship Game was immense. While he intercepted Aikman at a critical juncture of the 3rd quarter, it was the strategy to put him on 49er killer Alvin Harper at the start of the game. The first two scores were set up by turnovers as the Cowboys threw away from Sanders on Harper. So decisive was his coverage you could trace the decline of Harper’s career to this point.

The vanquished became the victors with their 38-28 defeat of the Dallas Cowboys in the ’94 NFC Championship Game. Super Bowl XXIX was an anticlimactic 49-26 win over the San Diego Chargers. Steve Young liberated himself from the ghost of Joe Montana. For 3 straight years these two teams pushed each other to heights they would not have achieved without each other. However the final shot was fired by the 49ers. 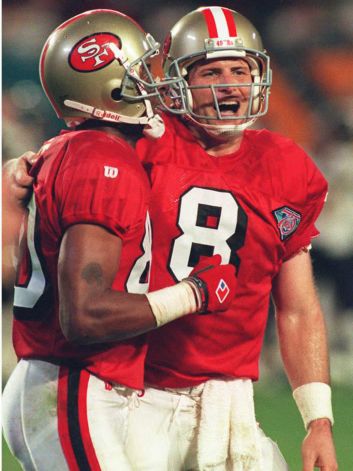 Jerry Jones had become obsessed with overtaking the 49ers who themselves made practical business decisions. They didn’t match Ricky Watters free agent contract with Philadelphia, which was a mistake, and they had to enter a bidding war for Deion Sanders. In ’94 they signed him to $1.1 million for one year where other teams were offering 4 years $17 million. Coming off a Super Bowl triumph and his 1994 NFL Defensive Player of the Year it was time to cash in. San Francisco baited jones and he took it and overspent for Deion at a cost of $35 million.

However there was the 1995 season where the 49ers were more in the spirit of the pre ’94 group. At midseason they took on the revenge minded Cowboys in Texas Stadium. The Cowboys were 8-1, healthy and ready to show with Deion Sanders in tow, they had overtaken San Fran. Going into the game they were missing QB Steve Young, FB William Floyd and staggered into the game with a 5-4 record. Perfect timing for the Cowboys to provide the knock out blow. Nobody believed the 49ers had a chance…