Well here we go again as the New England Patriots are locked in the latest scandal involving deflated footballs. I’ll be brief… A new football is like a new baseball glove. You work it in and squeeze it rub it and get the sheen off of it so you can get a better grip. This is common place in the NFL of not only quarterbacks but kickers.

Remember the introduction of the “K” ball??  The NFL believed that the higher percentage of field goals made was directly related to kicking “worked in” footballs. So the decision came down to have a series of balls marked with a “K” that were hands off to teams. The other balls they were able to throw, squeeze, and work in the 12 they want to use for game play. Every team does it…every quarterback does it.

The late Weeb Ewbank, who coached the Jets to victory in Super Bowl III, once said at a coaches clinic  “All I want is my fair advantage!” Which means everyone is pushing the envelope of what they can get away with or at least moving ever so close to the line.

However it has set in that the rest of the NFL is tired of the New England Patriots. Not one active quarterback came to Tom Brady’s defense as “Deflate-gate” was first investigated. They’re all squeezing and working in balls all the time. Where they have overstepped their bounds is having the equipment guy taking the air out of the football. That is what will get the Patriots and Roger Goodell in trouble.

The Patriots are in trouble because of their history with “Spy-Gate” and the $250,000 fine levied against them. This makes them a repeat offender. In a year where the Cleveland Browns and Atlanta Falcons were penalized for pumping in crowd noise, expect a heavy fine. Richard Sherman pointed a light at Roger Goodell’s chummy relationship with Patriots owner Robert Kraft during Super Bowl week. That spotlight is about to intensify… 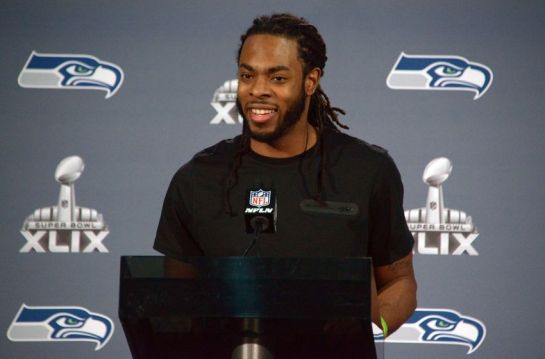 Richard Sherman’s comment about the relationship between Roger Goodell and Robert Kraft are coming back to haunt.

Did you notice the decision came down 1 week after the draft?? Now the Patriots can’t be penalized draft picks for this season. That will cause a groundswell of anger amid owners over this next week. Looks like a “scratch my back” move by Goodell and it can come to cost him. When it comes to competitive balance you have to be decisive and the punishment severe. The man that will have to be suspended when the axe falls is Tom Brady.

Brady wasn’t forthright in dealing with the investigation and lied about his involvement. Of course he knew what was being done because its the quarterback who selects what 12 balls a team is going to use on gameday. As Goodell has been harsh with his suspensions of players over domestic abuse and non-competitive violations, he has to be harsh here. Brady has to be suspended between 4-6 games or Goodell will come off favoring Kraft again.

The other owners shouldn’t stand for a suspension less than that and there will be grumblings from players if the punishment isn’t severe either. Black players will come forward stating Goodell won’t harshly punish a prominent white player. Teams that face the Patriots in the first 4-6 weeks will rally on the side of suspending Brady for those reasons. More importantly, Goodell is going to have to face the Richard Sherman allegation of favoring the New England Patriots owner.

During Super Bowl week, Robert Kraft vehemently demanded an apology for Bill Belichick and Tom Brady if they were cleared of wrong doing. Now that they haven’t all eyes are on Goodell in New York.

5 thoughts on “The Chancellor’s Take on Deflategate”