John Madden once told NFL Films “Cliff Branch was so skinny when he walked his back pockets would fight.” Yet no one put fear in NFL secondaries when it came to getting beat deep during the 1970’s. When someone says close your eyes and picture the Oakland Raiders of the ’70’s, one of the first visuals you’d have would be Stabler launching a bomb in Cliff’s direction.

Drafted out of Colorado in 1972, Branch was a football and track star in college. Oakland had been without a true deep threat since Warren Wells departure a few years earlier. His baptism by fire would come as he learned the game from Hall of Famer WR Fred Biletnikoff and going up against Hall of Fame CBs Willie Brown and Skip “Dr Death” Thomas in practice.

Going against those 2 big physical corners, Branch grew up in a hurry. When he was unleashed on an unsuspecting NFL as a 1st time starter in 1974, Branch blazed for 60 rec 1,092 yards and 13 TDs. Pedestrian by today’s standards until you realize he was 4th in receptions and led the league in yards and touchdowns.

It was the 1st of 4 straight Pro Bowl and All Pro seasons. He was the #1 weapon on a team that finished in no less than the AFC Championship in each of those campaigns. His best season capped off the Raider’s Super Bowl XI championship when he caught 46 passes for 1,111 yards and 12 touchdowns. Why was it his best? He led the league in TDs and was 2nd in yards losing to Roger Carr by 1 yard on arguably the most powerful NFL champion of the 1970’s.

One aspect of Branch’s game that makes him an all timer is how he played in big games. When everyone marveled at Hall of Famer Jerry Rice as he was breaking all time NFL post season records, whose records did you think he was breaking? When Rice caught 3 TDs in Super Bowl XXIV, he was breaking the Super Bowl record for touchdowns in a game when Branch set it with 2 against the Eagles in XV. When Branch retired after the 1985 season, he was the NFL’s All Time postseason reception (73) and yardage (1,223) leader before Rice broke them some 9 years later. He had broken the previous records set by fellow Raider WR Biletnikoff, who was now his coach.

However records and numbers only tell a part of the story. How much space did defenses give him in respect to his speed that opened up opportunities for Biletnikoff and Hall of Fame TE Dave Casper?? Do you realize he was the only skill player on all 3 Raider Super Bowl champions?? Against the Eagles in Super Bowl XV it was his 2 scores that broke the game open 21-3…winning it 27-10.

In Super Bowl XVIII when the Raiders held a precarious 7-0 lead over Washington it was Branch who blew that game open too. The Raiders first score was a blocked punt. In the 2nd quarter, a 35 year old Branch beat Anthony Washington and Darryl Green on a 50 yard bomb to put the silver and black in scoring position. A few plays later Branch scored from 14 yards out to give the Raiders a 14-0 lead. This took John Riggins out of the game and forced the Redskins to pass into the teeth of a secondary led by Vann McElroy, Lester Hayes, Mike Haynes, and Mike Davis. A 38-9 triumph won him his 3rd championship ring.

For his 14 year career he caught 501 passes for 8,685 yds and 67 touchdowns. His fellow receivers Biletnikoff and Casper have each made “The Hall.” This August his original quarterback, Ken Stabler will be enshrined posthumously. His original coach John Madden and the late Al Davis have both been enshrined. Once Tom Flores and Cliff Branch are voted in, it will close this chapter on Oakland /L.A. Raiders football.

**In 2016 the words from this article were used to induct Cliff into the Gridiron Greats Hall of Fame. Hopefully it will be the first on his way to Canton.**

For enshrinement into the Pro Football Hall of Fame, I present to you Cliff Branch. 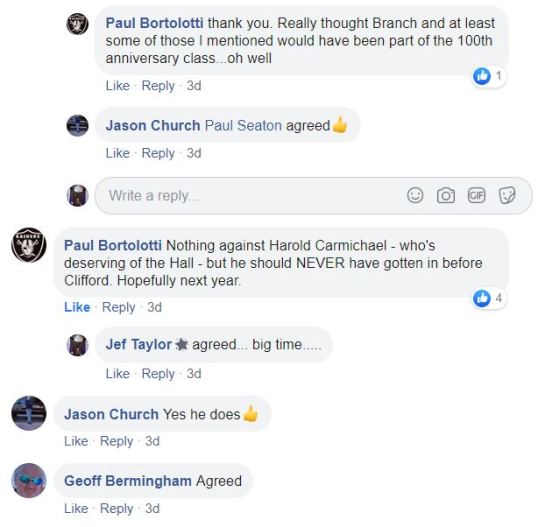 This nugget
TBT = Taylor Blitz Throwback... I remember taking a quick look in the Sports section to see NFL transactions and ran into this: Tommie Smith selling his gold medal earned in the '68 Olympics where he and @[1733036766:John Carlos] made the most famous sporting event protest in history.
Man.... damn good hit @chidiahanotu you owe your boy @garrisonhearst a cup of coffee for this hit. 😎🤣 Digging through the archives for a Brett Favre highlight in 2001. Gotta get to work.
Football Friday- Taylor Blitz Times Flashback: Tied to tag you Adrian... @takeospikes51 you did rough Elvis Grbac and held Raven WR Travis Taylor earlier in the highlight during the goal line stand... but cuz you closed it out with the pick six! Super Bowl champion Baltimore Ravens first loss in 2001 in the 2nd week. #taylorblitztimes #cincinnatibengals #coreydillon #takeospikes #adrianross #dicklebeau
Alright Coach... want trying to cut your pick off. @coachcfuller24 Better edit
Loading Comments...