When you ask someone what their definition of a great quarterback is, you invariably wind up with several answers. The one attribute in everyone’s criteria is that of a great passer. It can be argued that Dan Marino was the best pure passer in NFL history.  Everyone mentions his quick release but forgets how fiery his delivery of the football was.

To define his quick release, for the football coaching impaired, is the time it took to complete his throwing motion. The easiest way to measure this back then were to slow film down to individual frames. The average QB release would take 15 frames where Marino was routinely between 8 & 9. So the ball was coming out half a second sooner.

The direct results were more passes getting downfield and less sacks. If we look at his peak years of 1984-1986, Marino was only sacked 48 times while attempting 1,754 passes. The Dolphins led the league in fewest sacks all 3 seasons. Yet through that explosive delivery was the zip and hutzpah he put on the football. For he had one of the strongest arms in league history.

Unlike Peyton Manning and Drew Brees, who had league rules altered year after year to make them record breakers, Marino came in and shattered records through sheer ability. People talk of the great class of 1983 and most want to talk about John Elway first. Oh yeah?? Take a look at something:

During this time both Marino and Elway had taken their teams to Super Bowl XIX and XXI respectively. Of these vids, if you only watch one, watch the 1986 vignette. Yet I digress… take a look at Marino’s record breaking fast pitch 1984:

Then you have 1985 where he led the Dolphins back to the AFC Championship Game. Had they won, we would have had a rematch between Marino and Chicago’s 46 defense in Super Bowl XX. Considering Miami gave the 18-1 Bears their only defeat, its something to think about.

Then you have perhaps his greatest season in 1986:

What made his 1986 season special is he was truly all they had and teams still couldn’t stop him. In 1984 he still had many teammates who had made it to Super Bowl XVII the year before he was drafted. The Killer Bs defense was there but aging. By 1986 most of those teammates were gone as a rebuliding phase had started. Still he went 378 of 623 for 4,746 yards and 44 touchdowns. The 44 was 8 more than the previous record and he was within 56 yards of Fouts’ other mark of 4,802. 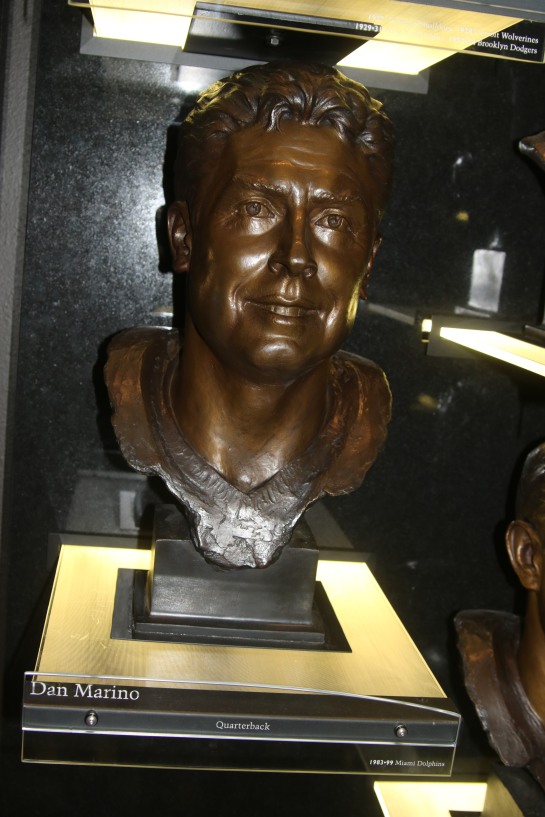 Also because it was the second time scaling those heights. He had set the record of 5,084 yards and 48 touchdowns in his 1984 campaign. He shattered the old record of 36 touchdowns which had stood for 21 years. He did it in his first full season as a starter. Not his 7th or 8th when Manning and Brady finally topped his mark.

Ultimately it was the fact that the game had passed by Don Shula as to why Marino didn’t make it back to the Super Bowl. The rest of his career the Dolphins failed to get a prime time receiver or runner. In 1995 they were the poster child for why the quick fix free agent route wasn’t the best place to build a team.

Yet when you look back at the promise of a young Dan Marino, the sky was the limit. He was definitely a legend of the fall.