Welcome to the Taylor Blitz Times NFL selections for week 2. We had a catastrophic crash that took down several articles and we apologize for not getting these out sooner. Yet this is about who will win in this second week in the season. Now our picks took a catastrophic turn for the worse also and we need to get back on track. So without further adieu lets jump into the games.

Kansas City Chiefs @ Detroit Lions: We have the Lions in this one. Matthew Stafford stayed healthy and the team is brimming with confidence after they’re fifth straight regular season win. Of course that’s dating back to last season. The Chiefs are still trying to figure out what happened to them last week at home against Buffalo.

Chicago Bears @ New Orleans Saints: This is an upset alert special. Brian Urlacher will take the field with a heavy heart with the death of his mother and his teammates will rally around him. He’s the heart and soul of the Bear’s organization and his team will elevate it’s play in this one. The Saints have had an extra four days off after their high scoring week 1 affair against the Green Bay Packers and they still haven’t learned to tackle. Just as they acquiesced in a defensive slugfest to Tampa at the end of last year, they won’t have the stones to stay in this one. Da Bears in a tough game

Jacksonville Jaguars @ New York Jets: The Jets in this one. Jacksonville comes in with both Maurice Jones Drew and Greg Jones on the injured report this week, and now journeyman Luke McCown is going to throw at Cromartie and Revis?? Ball game over right there. Although they are a slow starting team, Rex Ryan and the boys can seriously add one of those championship mental blocks by taking it to a lesser team and beating them soundly. This is where the Jets need to show another level of growth. Two years ago it was winning against the good teams. Last year it was finding ways to win close games and this year it’s to dominate lessor opponents and rest your starters late in meaningless action.

Cleveland Browns @ Indianapolis Colts: In an announcement to the NFL, it will be hammered home that the Colts have completely fallen from the league’s elite. The Browns were burned on a fluke / mishap last week when they were caught in substitution when the Bengals went ahead in the game. they had led the whole way…in this one. Peyton Hillis will run at the undersized Colts defense who may be missing MLB Gary Brackett also. If the Browns can get ahead and play ball control with Hillis and keep greybeard Kerry Collins from gaining any rhythm, they should pull away. Browns get first win of the year.

Arizona Cardinals @ Washington Redskins: Rex Grossman?? Yes, Rex Grossman. Off of the NFL trash heap to make folks forget all about the Donovan McNabb fiasco and give the Shanahan regime a legitimate quarterback. Skins were spirited in their conquest of the Giants where as last week the Cardinals were busy chasing Panthers all over the field while giving up 422 yards to Cam Newton. So the question that settles this is: If Cam Newton can carve up the CB deficient Cardinals (shouldn’t have given up Rodgers-Cromartie) to the tune of an NFL record at home…what will happen on the road to a resurgent Redskin passing attack?? Redskins in this one

Green Bay Packers @ Carolina Panthers: Intriguing matchup and lets put you in the drivers seat for a second. Lets say you were the defensive co-ordinator for the defending world champions..right?? Now you get to go back to where you had been fired and you were the first coach in that team’s history. Do you think you’d be prepared for that game?? Yes that is the plight of Packers defensive coordinator Dom Capers today. What better way to make the Panthers remember who they gave up than to silence the NFL’s new golden child?? Think Cam Newton will be confused?? LOL Capers is drawing up Packer blitzes as we speak. Packers roll in this one.

Tampa Bay Buccaneers @ Minnesota Vikings: We have no idea why the Vikings are favored here aside from the fact that odds are given to make betting money even on both sides. The Bucs are more physical than the Vikings and this is where they have to build on the aforementioned late season road win in New Orleans last year. They have the physical running style in LaGarrett Blount to run at the Vikings and the defensive heft to stop Peterson. Right now Donovan McNabb is really struggling and Aquib Talib and Ronde Barber are licking their chops. For a bit of history, remember when the Bucs went to the Super Bowl in 2002, it was Barber who sealed the deal with a 95 yard interception for a TD to finish off McNabb in the NFC Championship…yes an abstract. The Bucs win this one…close game though.

Baltimore Ravens @ Tennessee Titans: Just don’t see how the Ravens could lose to a team with such little momentum, they lost to the backpedalling Jaguars in week 1. After bludgeoning the defending AFC Champion Steelers last week and coming to town with the AFC’s defensive player of the week in Terrell Suggs?? Adelphi Coliseum will be empty going into the 4th quarter. Ravens pull away in this one.

Oakland Raiders @ Buffalo Bills: Rich Stadium should be brimming with excitement not seen since the 2001 signing of Drew Bledsoe. Is Ryan Fitzpatrick the real deal? Was the blocking performance by the Bills offensive line as stout as appeared, allowing one sack and producing a 100 yard rusher?? Yet before we get ahead of ourselves Bills fans, understand that Kansas City still gained almost a whopping 6 yards a carry to the Chiefs. They controlled the running attack by scoring and taking the running game away from the Chiefs. Can they do the same to the Raiders??

Darren McFadden is showing that last year was no fluke. The Raiders ran the ball down the Broncos throats last week. After a 22 carry for 150 yard performance the Bills better not let the Raiders get a lead because it could be a long one. Yet the noise should allow the Bills to get an early lead and control the game.  The Bills should be 2-0 at the end of the day.

Dallas Cowboys @ San Francisco 49ers: Both teams played well last week yet the 49ers blew out a substitute NFL team in the Seahawks. The Cowboys dominated the team (Jets) Taylor Blitz Times picked to win this year’s Super Bowl. Only a late game collapse with the injuries doomed the Cowboys in that Sunday night game.  A closer look at all those missing players had alot to do with who was missing on the special teams that allowed the punt to be blocked to seal their fate. This week Romo and the offense needs to keep the petal to the metal and score over 30. We think they will….Cowboys

San Diego Chargers @ New England Patriots: Here come the Jeckyll and Hyde Chargers playing up or down to their competition. Last week they played down to Leslie Frazier’s Vikings. Tom Brady nearly assaulted the NFL record  book last week coming within 40 yards of the all time record. Tedi Bruschi lit a fire under Chad Ochocinco in what we feel was a cheapshot, but it lit a fire. So in this one we’re going to take the Patriots in a win by a touchdown.

Cincinnati Bengals @ Denver Broncos: Listen, no team can ever be settled when there is a quarterback controversy. Even the 1971 Champion Dallas Cowboys were mired with a .500 record while they waffled over their quarterbacks. So why should the undermanned Broncos be any different with Kyle Orton or Tim Tebow. Coach Fox needs to put his face on the franchise and if I were he I’d ride Tim Tebow like Seattle Slew. First off, the fans want him and he’ll keep asses in seats all season. Second he allows the Bronco offense to play 11 against 11 down on the goal line and at any time they decide to exploit his 245lb body running the ball. Will he let it happen this week?? He pulls the trigger next week after another loss…..Bengals will find a way to win late 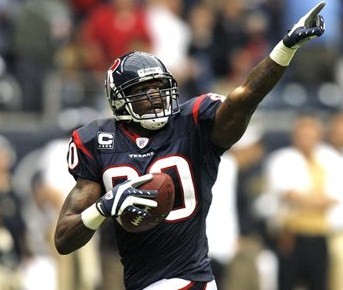 Houston Texans @ Miami Dolphins: The NFL’s best receiver is going to play back where he starred in his collegiate years with the Miami Hurricanes. He will be a tad fired up having watched his alma mater (The U) beat down nemesis Ohio St. the day before. His Texans had a seismic win last week pummeling the Indianapolis Colts. Now he gets to go against a secondary that gave up 517 yards to Tom Brady and the Patriots last week?? Yikes!! He might go for 200 himself in this one. Houston’s time to shine. It’s their year in the AFC South. Texans big.

Philadelphia Eagles @ Atlanta Falcons: Now Deion Sanders has always proclaimed the Georgia Dome to be the house that he built. Maybe, but it did house the Michael Vick Experience for many years until the dog fighting ring derailed a young promising career. How he is received will dictate how he plays and how he plays, so goes the Eagles. If they cheer their prodigal son upon his return, look for Michael Vick to have a terrific game.  He’ll want to showcase all his skills and it’s up to Andy Reid to help temper his game and keep his emotions from getting the best of him. The Falcons will be able to move the football on one of football’s worst run defenses. Its paramount that the Falcons keep #7 off the field and not abandon the running game as they did last week in Chicago. Have this suspicion that Michael Vick is going to do something special. Will it be enough for the Eagles to win in Dixie? We think so as well Eagles!!

There ya have it…week 2 is ready to kickoff…. Here are our selections, tell us yours

One thought on “Week 2 NFL Picks”