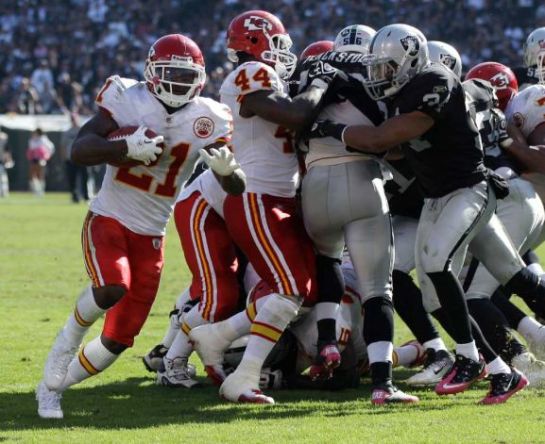 Just when it seemed that you knew where the season and how the teams would fare, up jumped week 7. The Oakland Raiders had to recover from not only the loss of owner Al Davis, they had to replace QB Jason Campbell due to injury. It seemed natural that there would be a letdown after the emotional win over Houston but a 28-0 loss to the Kansas City Chiefs may have turned the season. The Chiefs looked like their 2011 campaign was doomed after an 0-3 start. However do you realize that the Raiders have a bye and if the Chiefs defeat the Chargers, they would actually be in first place with a 4-3 record?? Sure we’re getting ahead of ourselves until you realize the AFC West has been thrown for a loop.

Gone is the efficient offense the Raiders enjoyed for 6 weeks with Campbell at the controls. The Raiders tossed up 6 interceptions yesterday with perennial below average quarterback Kyle Boller at the controls. He and Carson Palmer each threw 3 interceptions. Palmer’s is understandable since he has only two practices with the team but Boller has no excuse for being that ineffective. The Chiefs came into the game with only 5 interceptions on the year. However they left Oakland with a confidence boosting win and the Raiders are left trying to salvage a good season start short circuited by injury.

Did we say changes?? Well the Broncos will be galvanized for the next few weeks with their 18-15 comeback win over the Dolphins. The Broncos were down 15-0 with just under 3 minutes remaining when Tebow and the offense came to life. Up until then he looked like the erratic quarterback that John Elway envisioned before the season. Turnovers, inaccurate throws, and not reading the whole field. He missed a wide open Aaron Decker, when the Dolphins broke a coverage that would have been a 78 yard touchdown. Tebow completely whiffed on his throw. For much of the day he displayed exactly what team exec. John Elway and Coach John Fox’s countenances had suggested about his play.

Yet when the game and the lingering questions of inserting Tebow was on the line, he led a dramatic comeback. His first touchdown was a scramble throw but the throw for 27 yards to Daniel Fells to set up the second showed maturity. He threw a bend to the TE over the linebacker in the heart of a Cover 2 (we don’t say Tampa 2 here) which showcased the type of throw Tebow was accused of not being able to make. Then came his TE throwback screen for the TD before running in the two-point conversion himself. Yet before we get ahead of ourselves…lets take a look at the standings

Which brings us to the front running San Diego Chargers. After Coach Norv Turner was upset by Jets Coach Rex Ryan who said earlier in the week, ‘that he would have several rings had he coached the talent in San Diego’. The Chargers took the field with that emotion and marched to a 21-10 halftime lead only to fold in the second half enroute to a 27-21 loss. This was a big loss, not only because Turner’s reputation was on the line but again this team displayed the lack of heart to take down an AFC heavy. Its a broken record around here to talk about how they play up to or down to their competition yet here we go again. https://taylorblitztimes.wordpress.com/2011/07/05/2011-san-diego-chargers-preview/ The two teams with winning records the Chargers have played they lost to. This is music to the Chiefs ears who host San Diego this week and can overtake the Chargers in the AFC West with a win. The Chargers are 1-2 on the road and looked like the AFC’s best team in the first half. Yet a second half collapse against a team that knocked them out of the playoffs a few years back is disheartening and may have long term affects. Especially with a showdown with the World Champion Green Bay Packers in two weeks. This team could possibly be .500, again!! You have to be kidding me?? After a 4-1 start?? Of course it doesn’t sound far fetched. No more than the NFL’s #8 offense being shut out (2nd half) in the type of game that could have gotten the Chargers over the hump from a maturation standpoint. Even with Rex Ryan’s bulletin board shenanigans and they play that flat when their coaches reputation is on the line?? Uh Oh!! We fully expect it if you read our preview nothing has changed and yes the pendulum has swung.

The Chiefs are playing mistake proof football and Coach Haley has scaled back Matt Cassel’s passing. As of this week the Chiefs are the 7th best in the NFL at rushing the football. This bodes well for their upcoming game with the Chargers ranked 21st at stopping the run. They have gone back to last year’s formula that produced a 10-6 season. Thomas Jones (58 att., 185 yards) does the heavy lifting but the committee of Jackie Battle (232 yards / 5.2 avg) and Dexter McCluster (210 yards /5.0 avg.) has been effective. The Chiefs are 6th in sacks allowed with 10 and the defense has rebounded to a respectable 18th.http://www.nfl.com/stats/categorystats?archive=false&conference=null&role=TM&offensiveStatisticCategory=OFFENSIVE_LINE&defensiveStatisticCategory=null&season=2011&seasonType=REG&tabSeq=2&qualified=true&Submit=Go  Coach Haley, this is the formula you need to stay with until you have a full offseason with Cassel. He’s not yet ready to be your Kurt Warner as his early season play showed. One more week and the Chiefs can be in first place at midseason. Who would have thunk it 4 weeks ago??

Which brings us to the 2-4 Broncos again. The comeback was one that was more frantic than it was artistic but its the heart that was displayed that rallied his teammates that can’t be underestimated. You saw it in the team’s body english along the sideline and the spirit exhibited on the field. First the team found life in Willis McGahee’s emergence and now Tebow going into the lineup. His team believes in him and all comments about his play should be relegated to what he does the rest of this season. However as we at the Taylor Blitz Times look back, yesterday’s performance invokes the memory of the first comeback by Lil’ John Elway. Each came against weak teams but the experience could have long term affects on confidence. How can you be so enigmatic for 57 minutes and deadly in the last 3?? Yet when you quarterback the Denver Broncos, you will ALWAYS be compared to John Elway. Well here is Elway’s first fourth quarter comeback which looked eerily similar to Tebow’s yesterday. Take a look

Did you notice Elway only had one good throw on the corner route to Clint Sampson?? The rest were screens and a frantic ad-lib to a blitz. They looked the same to me and Tebow has a chance to grow from his moment in Miami just as Hall of Famer Elway grew from his. Are we saying Tebow will become a Hall of Famer?? Time will tell…we’re just comparing novice quarterback comeback to another for their starting point value. Now maybe his team executive nemesis Lil’ John will cut Tebow some slack. Believe me, we have.

Thanks for reading and share the article with other football fans.