In the NFL, Monday and Thursday night games are opportunities to showcase your top players and units. Two weeks ago was no exceptions as the Cleveland Browns lethal defense stood toe to toe with the Pittsburgh Steelers in Heinz Field. Anyone that watched that goal line stand, where the Steelers took four shots from the two, had to come away impressed.  They ran away from leading tackler D’Qwell Jackson then Chris Gocong and the rest of the Browns slammed Rashard Mendenhall violently to the turf. If the thought didn’t hit you “How good would the Browns be if they had some offense?” You had to be a Steelers fan. So with a 4-10 record, where do they go from here??

They need an immediate offensive boost at the quarterbacking position. So at first glance you have to ask if Colt McCoy is the future. We don’t think so and you have to make moves now to take advantage of their immediate defensive excellence.  So what would we do??

Exhibit A: Make a move for Peyton Manning. Would offer our 2012 first rounder and a 1st rounder in 2013, and secure the future Hall of Famer knowing we had a two year window with him on the field. With him in tow there would be the selling point as to why we’d be able to secure a free agent RB and first rate WR to produce some immediate offense. Convincing of the Indianapolis Colts that they have to rebuild now that Manning won’t be there is why we’d offer the two #1s.  If they bit, it would be a coup to possibly challenge for the Super Bowl in the next two years. Isn’t that worth the risk for a team that has only made the playoffs one time since 1999?? Think about it…

Exhibit B: Trade their number 1 pick in 2013, if they have to, to secure Robert Griffin III, along with getting a mid range receiver. They can lean on Griffin III’s ability to run and stretch the defense with half rolls and shotgun rolls to open running lanes for Peyton Hillis or a total dual threat Josh Cribbs in the backfield with him. The attention on the short game will open up the passing lanes 15 yards downfield.  What free agent running backs and receivers can they attract after drafting the Heisman trophy winner?? 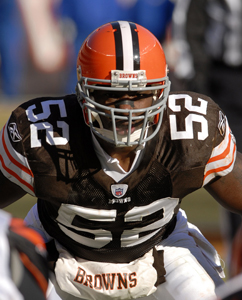 D'Qwell Jackson leads a new pack of Dawgs in Cleveland.

Remember this team has given up only the 7th most points thus far this season with 274. http://www.pro-football-reference.com/teams/cle/2011.htm Right now they have the most unsung star in football in D’Qwell Jackson who has outplayed Ray Lewis and Patrick Willis this year at Middle Linebacker. He is second in total tackles to London Fletcher (146) with 138 yet has 17 more solo tackles than Fletcher. Of all the top ten tacklers, he’s the only one with at least 3.5 sacks along with an interception, a forced fumble and 3 fumble recoveries. The Browns have slipped to 14th in defense but for most of the year they were a top five defense. This could be the start of the rebirth of the Cleveland Browns. What could they have been had they had a little offense this year?? Doesn’t matter. This can be the turn around team of 2012. We thought we’d volunteer who we thought would be catalytic acquisitions to turn around a moribund offense.

Games today killin' ours. Pac Man playing like the arcade
Marvin Harrison... I knew I knew that name from somewhere. Hall of Fame Indy Colt. Hisnson is killin' it in OSu red but Im still cheering Go Blue!
Charcuterie board before Thanksgiving feast... Leslie Watson-Bench ...it was delicious
So I post about Todd Christensen and I had to hear about Travis Kelce. Had to "just now" respond since I was in Facebook purgatory yesterday. Everyone wants to give a "hot take" Zzzzzzzzzzzzzz
Happy Birthday Lenny "Spats" Moore. Baltimore Colt legend... #24 was one of Johnny Unitas main weapons. In the 1958 NFL Championship Game, Unitas fooled the Giants in overtime by having Moore block for Alan Ameche on the famous TD. Game was called "The Greatest Game Ever Played" by the sporting press. Propelled the legends of Unitas, Moore, Raymond Berry, Lombardi, Landry, and Weeb Ewbank.
Taylor Blitz Flashback: https://wp.me/p18f1N-2qV
Loading Comments...