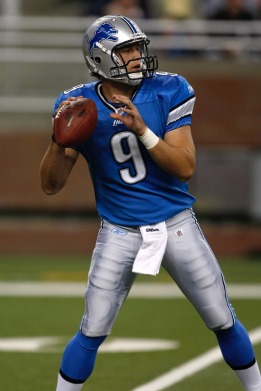 Don’t you just love this time of year?? The chase is over for most NFL teams while the elite are gearing up for the real race to Super Bowl XLVI. Tonight’s game between the Detroit Lions and the NFC South champion Saints is shaping up to be a dandy. The league has celebrated Drew Brees and his record breaking 5,476 yards passing this season, yet no one is hailing Matthew Stafford for his 5,038 yard season. http://www.nfl.com/stats/player In his first full season as a starter, Stafford completed 63.5% of his passes for the aforementioned yardage, 41TDs to only 16 interceptions. Do you realize that in the last 3 games he’s thrown for 1,284 yards 12 TDs and only 2 interceptions?? One of those was a desperation heave at the tail end of the 44-41 season finale against the Green Bay Packers. The bottom line is he’s improved as this season has concluded and comes into this contest red hot.

He is throwing to Calvin “Megatron” Johnson, who had a tremendous season, finished with a 244 yard receiving performance in the finale against the Packers. That performance propelled Megatron ot overtake Wes Welker for the league lead in receiving yards with 1,681. What has been impressive with these two has been the fearlessness shown in the 4th quarter. The 98 yard drive on the road in Oakland in week 16 featured a 45 yard bomb to Johnson with less than 2 minutes on the clock. Even the finale against the Packers, Stafford threw for his 5th touchdown and what was thought to be the game winner, with less than 2 minutes to go in that one.

Standing in their way on the Bayou are the Saints, just one year removed from being Super Bowl champions. Drew Brees and the Saints have come down the stretch on fire. They are in the midst of an 8 game winning streak and scored over 40 in their last 3 contests. Yikes!! Something has to give. One major loss is the fact the Saints have to go into the playoffs without Mark Ingram. In a single game scenario Darren Sproles can fill the void but can he carry the load through the playoffs. At least Pierre Thomas is still there and is one of the best running backs on screen passes in case they can’t run effectively.

Both teams come in deficient on the defensive side of the ball ranking 23rd (Lions) and 24th (Saints) respectively. However there is a huge discrepancy between the two when it comes to forcing turnovers. The Saints have only forced an anemic 16 turnovers for the season where the Lions have forced 34. http://www.pro-football-reference.com/teams/det/2011.htm How will the Saints respond if they find themselves in a tight contest after cruising for the past 6 weeks?? What happens if Drew Brees gets off to a slow start or if the Lions force a few turnovers early?? Can the Saint defense do anything to turn the game around if this happens?? By the way Jabari Greer and Tracy Porter have to deal with Megatron… Can they??

To win the Lions have to force a few early turnovers and get ahead of the Saints. The Lions learned to win on the road early this year with the twin twelve point comebacks in Minnesota and Dallas in the 4th quarter. Even the last week of the season we witnessed valor in their 44-41 loss to the Packers. Stafford threw for 520 yards and came within 22 yards of the all time record set by Norm Van Brocklin in the early 50’s. In the playoffs you win with stars and the Lions have several in Stafford, Megatron, and Ndamukong Suh. To win the Saints need Will Smith, Roman Harper, and Jonathon Vilma to have spectacular games. In this one, the Lions are ripe for the upset. We just don’t believe in the Saints defense.