When it comes to the soul of the game, we’re talking about hitters, those that epitomized the toughness when you think of NFL football. Without question one of the first, if not the first person who comes to mind is Dick Butkus. 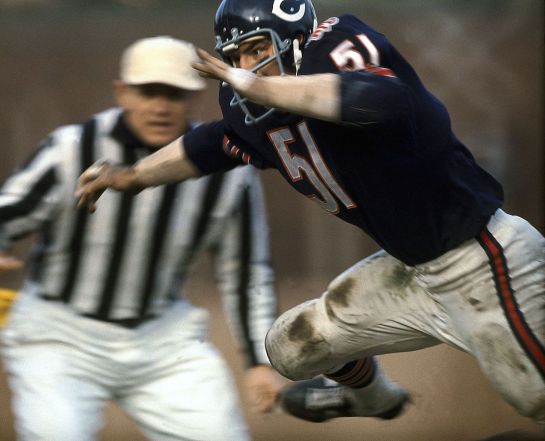 If only Jim Brown had played a few more years. What would the highlights of their collisions look like?? Yikes!! At 6’3 245 lbs, Butkus was the size of most offensive linemen in the 1960s and he used that mass to crush ball carriers. If you love the hitting element of football, you have to love the way he played.

One element of how fiercely he competed had to come from playing on such bad teams. During his 9 year career the Chicago Bears were bottom feeders in the NFL. In 1969 the Bears went 1-13 on a team with he and Gale Sayers who are both Hall of Famers. How bad was the rest of that team? He channeled that rage and frustration and took it out on his opponents. He was to the NFL’s first 50 years what Ray Lewis has been to the last 50 years: The best and hardest hitting linebacker of his era

Once we move into the future and the way football is played now we have to look at the next 50 years. Ray Lewis defined the 50 after Butkus and Hall of Famer Brian Urlacher was the next in Chicago Bears lineage that suited up after 2000. Great player but didnt engender the menace a visceral hitter like Butkus did. The two vids we just watched and you cringed at the hitting of an era gone by.

Dick Butkus was a legendary “Soul of The Game” performer.

7 thoughts on “The Soul of the Game: Dick Butkus”