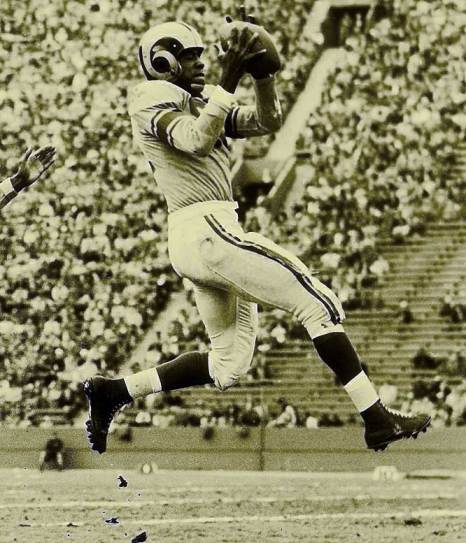 When you talk about the soul of the NFL game, you can’t tell the story of hitting and defensive might without “Night Train” Lane. A Hall of Fame member. In fact one thing you’ll note as we go through this series is the fact that most of these players were bigger than what was customary for playing their respective positions. Standing 6’1 and 195lbs in 1952, Lane was the size of your average linebacker but was platooned at cornerback. In fact he was trying out at receiver and projected to be a tight end hence his wearing the number 81. Yet he was moved to the defensive side of the ball where he went to work.

Lane was one of the hardest hitters of the 1950’s and early 60s where he manhandled smaller receivers and runners. Many of which he tackled around the head using the facemask. Of course these tactics are outlawed today but Lane was the reason for these new rulings. As you will see in this NFL Films short he was savage when he brought down an opponent. He had complete disregard for his body with his reckless play so naturally he didn’t care for his opponent’s.

However one of the differences between Lane and other hard hitting defensive backs in history, he still made plays on the ball. Think about it for a second… When I say envision Jack Tatum you can’t conjure up a single image of his intercepting a pass. In fact Lane’s rookie record of 14 interceptions in a 12 game season is an NFL record that still stands and will never be broken. It has stood for over 60 years and the closest anyone has come to it was Lester Hayes in 1980 with 13, then Everson Walls with 11 in 1981. Those were achieved during the modern 16 game season format.

Lane was the prototype to the modern NFL cornerback in baiting quarterbacks to throw in his area by allowing the receiver to look as though they were open. Then he’d swoop in for the interception. If he was late getting there…well…this is what happened

Dick “Night Train” Lane left us in 2002, yet his spirit of hard hitting football lives on every time you see a defensive back clock a receiver. Yet a clean shot can be delivered with a forearm or a shoulder and not lead with the head. This Hall of Fame talent played 14 seasons, made 7 pro bowls and has his bust in the Pro Football Hall of Fame

One thought on “The Soul of The Game: Dick “Night Train” Lane”