Tomlinson set to retire as a Charger on Monday.

We’re hours away from the retirement of a future Hall of Famer when Tomlinson takes the podium. In the history of the NFL, Tomlinson is an evolutionary link to great runners of the past.  Ernie Nevers, Steve Van Buren, Jim Brown, OJ Simpson, Walter Payton, Eric Dickerson, Barry Sanders, Emmitt Smith, &  Marshall Faulk…to name a few.  When you watched his running style, you could see elements of Payton, Emmitt, Faulk, and Sanders in his play. Tomlinson is one of a dying breed of running backs that could do everything.

He was the one running back I thought would break Smith’s all time rushing mark  as the all time leading rusher. The fact that he didn’t, gives me a greater appreciation of Smiths’ accomplishments. Yet if you look at some of Tomlinson’s numbers they are beyond great. Do you realize he scored 162 total touchdowns in just 11 seasons?? Or dissecting the numbers he scored 153 touchdowns in 9 seasons for San Diego. Jim Brown in that same length of time scored 126. Sure there were fewer games back then yet if we added another 20 games to Brown’s career they’d be equals.

It’s arguable that Tomlinson’s 2006 season was the greatest for a running back in  NFL history.  He ran 348 times for 1,815 yards 28 TDs while catching 56 passes for 508 and another 3 touchdowns. The 28 rushing touchdowns are an NFL record as is his total of 31 in a season. THIRTY ONE?!? Emmitt’s best? 25 Marshall’s best? 26 Jerry Rice’s best? 23 The best comparison was that of the 2005 season of Shaun Alexander, who was the touchdown record holder before him in 2005. Alexander scored 28 touchdowns (27 rush/ 1 receiving) yet only caught 15 passes for 78 yards. He was nowhere near the all around threat as Tomlinson.

By the way…in 2006 Tomlinson had 2,323 yards from scrimmage… Did you know that wasn’t his all time best?? That total came in 2003 when he amassed 2,370. Now Marshall Faulk totaled 2,429 yards from scrimmage in the 1999 season where the Greatest Show on Turf rose to NFL prominence. Now his season against Marshall’s?? Tomlinson outrushed him 1,645 v. 1,381 but Faulk outgained him in receiving yards 1,048 to 725. Sure Faulk beat him, but do you realize in that year LaDainian became the first player in NFL history to rush for more than 1,000 yards and catch more than 100 receptions in the same season. Understand Larry Centers was the first to catch 100 receptions & holds the record with 101, yet only rushed for only 254 yards when he did so. 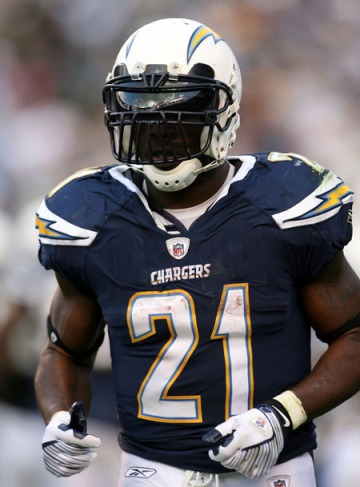 What we’re getting at is an all time great back who was the space aged version of Walter Payton or Jim Brown. Down to his “Predator” facemask to his style of play, Tomlinson was ahead of his contemporaries and it’s no secret that with his inluence on the side.. Tomlinson may have been the impetus for Adrian Peterson, who ran for an NFL record 296 yards against the Chargers in 2007. He inspired greatness in others.

Even though he left to play for the New York Jets for two years, he is a San Diego Charger. When he came back to speak at Junior Seau’s memorial at Jack Murphy stadium, he received a standing ovation from the crowd. He belongs to San Diego and is a favorite son of the city. For his NFL career he ran for 13,684 yards and an astounding 145 TDs, while catching 624 passes for another 4,772 yards with 17 more touchdowns. He was a force with power and speed with moves to match.

LaDainian Tomlinson is the running back a new generation has to measure itself by. For longevity, the way to carry yourself in terms of being humble away from the field, philanthropic efforts, and being a team player. He deserved every accolade he achieved on the field and will be immortalized in Canton in five years. Where it’s possible the history of the game can be explained without him, it’s more apparent the history of the game shouldn’t be told without him. A great player who was a throwback that his predecessors were proud to watch.

5 thoughts on “The Chancellor Weighs In: LaDainian Tomlinson Retires”