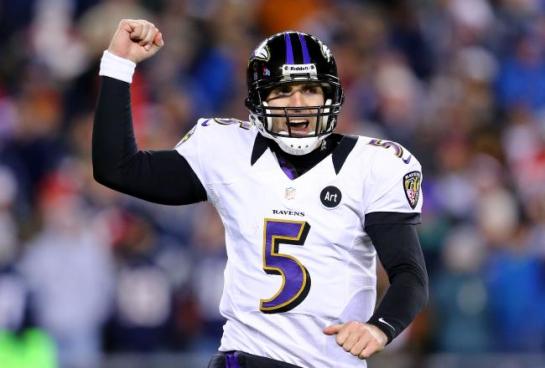 Joe Flacco has come of age in the 2012 playoffs.

Contrary to LaMarr Woodley’s opinion, the Baltimore Ravens have made it to the Super Bowl with Joe Flacco at quarterback. Even here, our CEO has had his issues with Joe Flacco who used to shrink a the enormity of the event. But something happened out in Denver that separated the Raven quarterback we once knew, to the confident play maker that has emerged.

For the whole of his career, Flacco plays well enough but always left you wondering. Every now and again he’d have a flash, like the last second touchdown pass to TJ Houshmandzadeh in week 4 of 2010 to beat the Steelers in Pittsburgh. Yet when the season was on the line some 14 weeks later in the divisional round of the playoffs, Flacco played nervously and wouldn’t pass downfield. In this playoff loss he only completed 3 downfield passes in a 31-24 loss that seamed to seal his fate as a quarterback who couldn’t lead his team to a championship.

He appeared to be afraid to pull the trigger and kept checking the ball down to Ray Rice in that game. Its been the knock our CEO has had on him for years and we’ve talked about ad nauseum when covering the Ravens. https://taylorblitztimes.com/2012/07/13/2012-baltimore-ravens-preview/  He wasn’t going through his  progressions and getting the ball down the field when the plays were there. We spoke of a damaged fight or flight mechanism that had his nervous feet count 1, then 2 seconds then throw it to Ray Rice. There were games when a receiver would break open and the ball would be overthrown. He wouldn’t capitalize on these moments and would always keep the Ravens opponents in games by not putting them away. It happened in last year’s AFC Championship Game against the New England Patriots as well.

Even when you look at his performance over this season, he only completed 59.7% of his passes for 22 touchdowns with 10 interceptions.  Rookie quarterbacks Russell Wilson and Andrew Luck out performed that throwing for 26 and 23 touchdowns respectively. He performed well in the wild card win over Indy with a 282 yards passing, 2 touchdown performance, but would he continue those ways against an AFC heavyweight. For his career he would beat the lessor teams and struggle against the better teams in the AFC playoffs. Why would the divisional tilt against the Denver Broncos and Peyton Manning be any different?? The Broncos were on an 11 game winning streak and he had under-performed and lost to the elite quarterbacks in playoff games. He had said he was elite and now was going into the lion’s den at Invesco Field. It didn’t look good.

Flacco’s coming out party in the AFC Divisional 38-35 defeat of the Denver Broncos.

In the game that will forever define him going forward, Flacco played a magnificent game. He was decisive and made every read while going through his progressions completing 18 of 34 for 331 yards and 3TDs. Where Ray Rice was 2nd on the team with 61 receptions, he didn’t catch a single pass in the 38-35 overtime thriller. When the play was there, he was on time and perfect like when he feathered a 59 yard bomb to Torrey Smith to tie the game at 7. However the clarion moment for him took place when he took the field with 1:09 left in the game and down 35-28. His team needed a touchdown and they had to cover 77 yards. On a 3rd and 3 Flacco dropped back and instead of his usual scared check down throw he launched a game tying bomb to Jacoby Jones for 70 yards and the tying touchdown with :41 left in regulation. Everyone of the 78,000 in the stadium were stunned along with the millions watching the game and Broncos S Rahim Moore. No one believed he would go deep.

It was the confidence in how he dropped back and delivered the football that was the most telling point of the play. He was sure of himself and the throw he executed will go down in NFL history. He carried that confidence into the AFC Championship Game in New England. Where for a second year he out-dueled Tom Brady throwing for 240 yards and 3 more touchdowns leading his team to Super Bowl XLVII. If you’re keeping count, Flacco’s thrown for over 800 yards, 8 touchdowns and no interceptions during this postseason. He’s buried the memories of losing in the playoffs to two of the most storied quarterbacks of his era in Manning and Brady.

So now he gets to wrap up this great postseason run in Super Bowl XLVII. Why would he get nervous now?? Everyone is talking about Colin Kaepernick, Ray Lewis, Ray Rice, and Frank Gore when the man poised to win the most valuable player award and possibly this game is wearing #5 for the Ravens. He now has the most road wins in playoff history with 6. On Sunday he’s going to try and join Eli Manning as the only quarterbacks with 7 or more postseason wins away from home. He’s flown under the radar this whole week and seems poised to do it again.