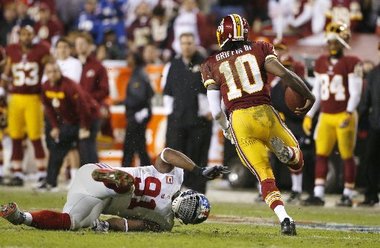 It’s amazing how often people worry about how running quarterbacks will get injured. The complete truth is there is no safe spot on the football field for a quarterback. Of course a quarterback can slide at the end of the run to protect himself but that is really all that he has. Remember in the 2005 playoffs when Carson Palmer, when he was with the Bengals, was hit by Kimo von Oelhofen?? How about 2008 when Tom Brady was knocked out for the year?? What about when we go back to the first game of 1991 when Randall Cunningham was knocked out for the year after being hit by Green Bay Packer Bryce Paup?? All of these occurred in the pocket.
Or a more vivid picture was when Steve Young, a reckless running quarterback at times, was knocked out in 1999 by a blitzing Aeneas Williams on a Monday Night against the Cardinals. Remember that hit?? That also took place in the passing pocket. It was the concussion that ended Steve Young’s career. Of course the Washington Redskins should still utilize the “Read Option” and exploit the talents of Robert Griffin III. To eliminate that would take away his greatest weapon which right now is his dual threat capabilities.

If he’s making a speedy recovery go with it. It has always bothered our CEO when fans or coaches want to tell a mobile quarterback to not run. A mobile quarterback turns football into 11 on 11 when it comes to a running game. Defenses haven’t accounted for quarterbacks in over 60 years in the NFL. Under normal circumstances they hand the ball off and watch the play. It wasn’t until Brett Favre in the mid 1990s started carrying out a “fake pass” to retard the charge of the Outside Linebacker to the weakside, that returned it to 10 on 10 from a strategic standpoint. Other coaches started to run fake reverses away from the running play to trick defenders into staying home instead of pursuing the ball. This allows greater cut back openings for the running back as well.

Robert Griffin III along with Colin Kaepernick, and Russell Wilson and the Pistol Offense is the next evolution of football. Now the quarterback has to be accounted for on a running play. So let RG III run when he gets back.

I was supposed to get some of these. Going to look for a few. Def want this one when Holmgren went into the Packers Hall of Fame, the Brett Favre, Sterling Sharpe, and definitely the '75 snifter when the '60s group went in including Vince Lombardi. #taylorblitztimes #thechancelloroffootball #GreenBayPackers #greenbaypackershalloffame
Football Friday: I was told once I have too many football jerseys...I no longer speak to the person who said that. 🤣😉 The latest arrival... My 1993 Mitchell & Ness KG #91in Steeler home black. My dude... ordered on the 10 year anniversary of the article written for KG for the PFHoF. #taylorblitztimes #thechancelloroffootball #profootballhalloffame #profootballhalloffame2016 #thanksforthememories
Throwback Thursday: https://wp.me/p18f1N-5s
Way back Wednesday: ...and you wonder why Carson Wentz didnt pan out in Philadelphia. He gets injured and the Eagles win Super Bowl LII... then erect a Nick Foles statue at Lincoln Financial Field... and then displayed Nick Foles uniform at the Pro Football Hall of Fame. This was the display when I saw it induction weekend in 2018.
Way back Wednesday: The Chancellor of Football meets "The Prez" President of the Pro Football Hall of Fame David Baker at The Gold Jacket Dinner. #taylorblitztimes #thechancelloroffootball #profootballhalloffame #illbehissuccessor 😎😉🥂🍾🙏#goldjacketdinner
Way back... trip to Oakland to see the Raiders bs Seahawks. Raider fans were nuts... loved 'em. Ran into former LA Raider DE Greg Townsend, the late Marv Hubbard... talked about his rivalry with Willie Lanier and the Chiefs...and my man Mike Davis at the Raider draft party he hosted. #taylorblitztimes #thechancelloroffootball #Raidersshouldstillbeinoakland #shouldhavebuiltthemastadium