Once the Green Bay Packers announced Aaron Rodgers would start this week v. Chicago, the importance of winning this football game went up two fold for Jay Cutler. After the 54-11 debacle against the Philadelphia Eagles, thoughts were out there concerning his future as quarterback of the Bears. Head Coach Marc Trestman had made the difficult decision to sit effective backup Josh McCown for his starter. The offense had gelled with his play and was coming off a 45-28 drubbing of the Dallas Cowboys. 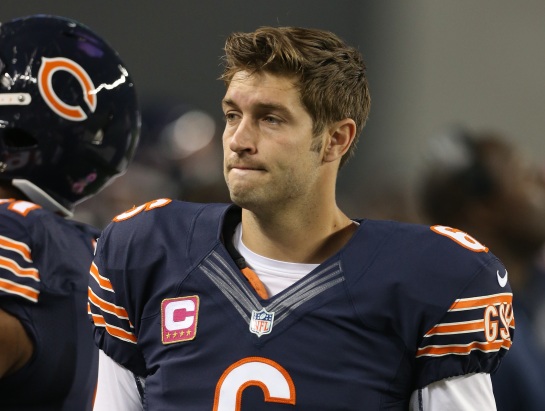 Jay Cutler is playing for his future this Sunday.

The Bears had been 3-3 with McCown as the starter and the offense had averaged 29.2 points per game with him at the helm. Actually higher than the 28 point average the team experienced with Cutler. The offense had been more diverse but more importantly they didn’t have the streaky play as they usually did with Jay.

Now  in a winner take all battle for the NFC North, here comes the nemesis he has failed to beat dating back to the 2010 NFC Championship. How important was that game?? It was the defining moment that sent Aaron Rodgers career into the stratosphere and left Cutler’s mired in the twilight between average and elite. He’s still haunted by that defeat. Perception is reality and everything about him has been in question from his demeanor to his play.

As they were establishing themselves in the NFC North, what gets lost is Cutler swept Rodgers and the Packers in 2009. They split in 2010 before that fateful meeting in the 2010 NFC Championship. From that point on he hasn’t beaten their most hated rival once. Now on the cusp of a contract year, the Bears have to decide if Cutler is worth $100 million to be the face of the franchise for the next 6 years. A hard decision when your chief rival has you in their hip pocket and believes you can’t beat them.

The Bears have done everything as a franchise to put him in place to be a winning quarterback. They brought in a Pro Bowl Tackle in Jermon Bushrod, drafted Kyle Long and Jordan Mills to solidify the offensive line. Now boast arguably the best set of receivers and running back with the development of Alshon Jeffrey. To watch Josh McCown outperform Cutler this year has the Bears wondering which free agent QB to bring back. Consider this:

Do you sink $100 million into a Jay Cutler who hasn’t been able to win any big games against the Green Bay Packers?? Or do you sign a Josh McCown to a more cap friendly $30-40 million, keep the nucleus of the offense then draft and develop his heir apparent??

With a loss today, Cutler’s fate is sealed as they go the latter route.  Even with a win Cutler won’t be able to save his job with a one and done playoff scenario. He has to win convincingly today against Aaron Rodgers and win at least one playoff game to remain the Bears future. Chicago has transitioned to an offensive team under Marc Trestman and now he needs to decide on his quarterback. The Chancellor of Football believes Cutler’s fate is already sealed. We’ve watched this before. Consider this:

In 2010 going into the last game of the season, the Bears could knock the Packers out of the playoffs with a win in Lambeau on the last Sunday of the season. We watched Cutler muster only 3 points in a 10-3 loss then the Packers went on to win Super Bowl XLV. Fast forward to last week when they took the field after learning of Pittsburgh’s winning 38-31 over the Packers. With a chance to put their stamp on the division they get blown out 54-11 in Philadelphia?? This shows the mentality of a Jay Culter who disappears when he has the chance to  beat the bully and never does. It would be best for Bear fans today to invest less emotionally in this game. Josh McCown should still be starting. Cutler will lose this game today because it’s his make-up. The Cutler era should end today in Chicago with another loss to Green Bay.