Welcome to day two of the National Football League playoffs for 2013. One of the items being thrown around by television pundits is “No one wants to play the San Diego Chargers.” It’s true that the Chargers have won 5 of their last 6, but so have the Cincinnati Bengals. In the 6 Cincy has won, one of those was a 17-10 victory over these exact same Chargers on their home turf just a month ago. The media is at it again…

The Cincinnati Bengals should be the best of the AFC North in 2013.

What about the fact the Bengals were not only 8-0 at home but tied the National Football League record for scoring 40 points in four of those games?? Last performed by the 2000 St Louis Rams of The Greatest Show on Turf vintage. They averaged 34.4 points per game at home and are being treated like an after thought by the media. Everyone is pointing to Andy Dalton throwing 4 interceptions in the finale against Baltimore. Yet they still scored their average with a 34-17 rout ending the reign of the champion Ravens.

Now the Chargers show up on wild card weekend with the NFL’s 23rd ranked defense that has given up 30 on the road to Philly, 30 to Washington, 38 to Kansas City, and even 27 to the lowly Raiders. Do you realize the Chargers have only forced 6 turnovers in 8 road games this year?? Now they’re going out in the cold and will do it in the playoffs?? Isn’t this the team that barely beat the Chiefs playing with a second string group 27-24 in overtime just to get into the playoffs?? What juggernaut “no one wants to play team” are they talking about??

The National Football League’s #3 defensefeatures Vontaze Burfict. Who is seriously considered for TBT Defensive Player of the Year.

The Bengals will win this game 37-24 on the strength of a couple things. The first is they field the only top ten defense from the AFC that is in the 2013 playoffs. They rank 3rd… Another is the Bengals know the Chargers very well. Not only did they beat them in San Diego 17-10 this year, they beat them 20-13 last year on the road again. Now they get them at home where the Bengals really put up points?? That doesn’t bode well for today. Who and what were the teams ranked Cincy draped 40 on at home this year?? Try 49 on the 11th ranked New York Jets, 41 on the 9th ranked Cleveland Browns, 42 on the 20th ranked Indianapolis Colts, and 42 on the 31st ranked Minnesota Vikings. Last but not least these were totaled from week 8 on so this is very relevant.

Don’t listen to ESPN try to sell you a bag of goods on San Diego and not bring up the strength of the Bengals. They are peaking at the right time and are right where we predicted they would be: https://taylorblitztimes.com/2013/04/16/2013-cincinnati-bengals-team-preview-slowly-building-a-winner/ 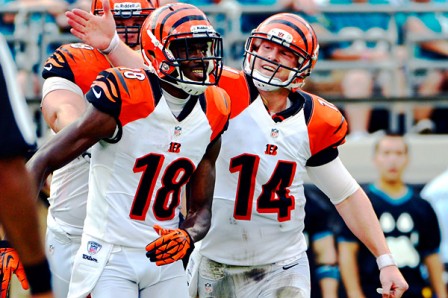 Andy Dalton and A.J. Green have only known playoffs in their 3 seasons in The Queen City. Today should show the growth of the team with a win.

The Chargers really would pull off a tremendous upset if they were to win today. The Chancellor of Football doesn’t see that at all, not in spirit, way the teams are playing, nor in stats. But that’s why they play the games as Chris Berman always reiterates. However the Bengals should win easily 37-24. We predicted they would be in New York for the Super Bowl. Step one is today…