War of the Worlds… The first meeting of champions from both the upstart American Football League, and the established National Football League took place on January 15, 1967 in Los Angeles. NFL Films called it “Spectacle of a Sport” and it was when you think about it. Separate leagues, separate television contracts, and even different balls made the two leagues as different as night and day. The AFL was the league that went for 2 pt conversions and had the names of the players on the back of the jersey where the more established NFL was more conservative by nature.

Even the Super Bowl trophy was new as Pete Rozelle commissioned a new trophy produced every year. Up until that point the championship trophy rotated to the winning organization for that year. So the NFL trophy that made the rounds stayed in Green Bay at the conclusion of the 1965 season when the Packers dethroned the defending champion Cleveland Browns 23-12.

Did you know the LA Coliseum for Super Bowl I had over 15,000 empty seats? The game was broadcast on 2 networks….well kinda…lol Pete Rozelle and the NFL had the main CBS feed and microphone, where the AFL’s NBC just gave a commentary over the video supplied by CBS for their broadcast. So after the game, commentators for both networks were fighting over the INDIVIDUAL locker room microphone after the game when it was time for the trophy presentation and subsequent interview of Vince Lombardi. That is nuts…

How far had the AFL come in the 6 years since its inception? The Chiefs were behind only 14-10 after a 1st half where the Chiefs held their own however the game changed on a Willie Wood interception in the 3rd quarter, running it back to the Chief 5. A few touchdowns later and the Packers were on cruise control 35-10 which was the final. 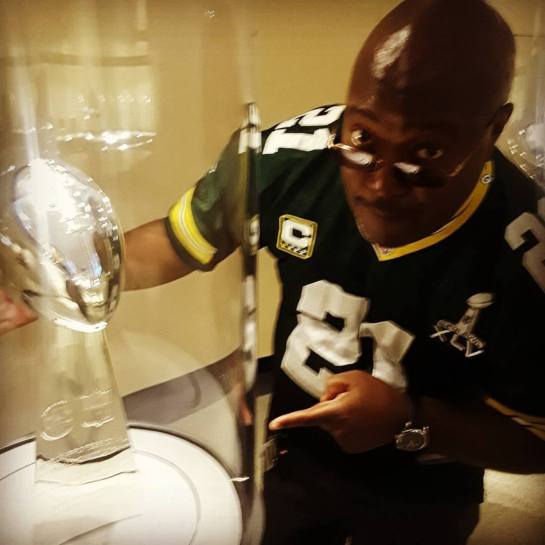 Super Bowl I Trophy sits in the Green Bay Packer Hall of Fame.

In my opinion, this was the best of the Green Bay champions of the 1960s. They were more diverse than previous champions and the mixture of young talent with the veterans made for a lethal combination. The exact peak where veteran savvy and physical ability meet before aging would slow the Packer machine. You still had Jim Taylor as the bludgeoning fullback where at halfback Elijah Pitts along with rookie Donny Anderson supplemented aging Paul Hornung. Bart Starr was now the chief QB in the league who threw for 4TDs in the ’66 NFL title game against Dallas and 2 more against the Chiefs in the Super Bowl which doesn’t include a 64 yd TD strike to Carroll Dale that was called back. What 3 yards and a cloud of dust? This team wasn’t just running sweeps anymore.

Speaking of sweeps: Forrest Gregg, Jerry Kramer, Bill Curry, Fuzzy Thurston (always loved that name), and Bob Skoronski were still supplying those holes and were the essence of the Packers. They beat you on the line of scrimmage…that plain and simple. Forrest Gregg went on to win a 3rd ring with the Cowboys in Super Bowl VI and coached the Cincinnati Bengals to Super Bowl XVI. Kramer became the voice of that team thru a series of bestselling books. Curry went on to play in 2 more Super Bowls with the Baltimore Colts and coached at the University of Alabama as well.

These men paved the way for many a 1,000 yd rusher in the 60’s. TE Marv Fleming has to be added to the mix since TEs had to block back then. Fleming replaced Ron Kramer as Starr’s short pass option over the middle. He would go on to play in 5 of the first 8 Super Bowls (3 with Miami) becoming the first man to win 4 rings (the Charles Haley of his day). Carroll Dale, Boyd Dowler, and “out all night” Max McGhee were steady, heady receivers. Max went on to enjoy success in the restaurant business… Chi Chi’s I believe.

Again…winning on the line was the name of the game with the Packers when it came to defense: Willie Davis, Ron Kostelnik, the late Henry Jordan, and the late Lionel Aldridge were draped on Len Dawson in the second half of Super Bowl I like a tailored suit. They were a veteran group that did its main job of stopping the run, and in a 4-3 defense, keep blockers off of the MLB. Since the late Ray Nitschke skated into the Hall of Fame, I think it’s fair to say they did it well. How many highlights do you see Nitschke making plays tackle to tackle? Tons. Texan Lee Roy Caffey and Hall of Famer Dave Robinson were solid at outside linebacker. Robinson along with Bobby Bell were the prototype to the modern outside linebacker with their size and range when the league brought in the Robert Braziles, Clay Matthews, Lawrence Taylors and Ricky Jacksons in the 80’s.

The late Bob Jeter, former USC quarterback turned safety Hall of Famer Willie Wood, Tom Brown, and Hall of Famer Herb Adderley (converted RB from Michigan State) was simply the best defensive backfield in football…maybe football history. Who could read a QB better than a former QB? When it came to athletes Adderley in his heyday was Deion Sanders without the flash. Adderley won another ring in Super Bowl II with the Packers then would go on to play in 2 more Super Bowls with Dallas, winning in Super Bowl VI along with Forrest Gregg. However Adderley was still a starter and blanketed Hall of Famer Paul Warfield, of Miami, in that game some 5 yrs later.

Another look at this team tells you another story. Lombardi coached at a time when it was expressed Italians / Catholics weren’t viewed as football coaches. See how he didn’t get the job to replace Jim Lee Howell in New York originally. This is at a time where would be voted President back in the late 50’s. I bring this up because as you look up the racial make up for most teams in the 60’s, the Packers more than any team did more for diversity and breaking quotas than any other team. At least in the NFL. This group was champion a few years before the 1969 Chiefs who became the first team to win it all with minorities comprising more than half their roster.

Yet Lombardi had black linebackers and safeties on his defense or in the “thinking man spots” that wasn’t prevalent in the 1960’s NFL.

Lombardi had a lot to do with that obviously and they were constant champions. Not 3 in 4 yrs, not 2 Super Bowls in a row, not 4 Super Bowls won in a decade. They won half (FIVE) of the decades championships, there must have been suicidal Bears fans everywhere in the 60s.

Aside from football X’s and O’s this football team will never be forgotten.

One thought on “SUPER BOWL I CHAMPION 1966 GREEN BAY PACKERS”

Go Suns!! Suns in 4.... ok 6!!!! Go Suns!!
People and their politics..
Link - https://wp.me/p18f1N-1hA
Taylor Blitz Archive - Pulled from the Pyramids... the official Super Bowl XXXV highlight. Keith... you dont block those 2 kicks vs Tennessee in the divisional playoff. This doesnt happen. Still one of the greatest defenses in history and one of my favorite marches to a championship. In my greatest defenses series with all Super Bowl champs, #1 ranked defenses, all record setting defenses, this group comes in at #2... set the record for fewest points allowed in a 16 game season with 165. Should have put in my pic with Marvin Lewis from the 2016 ceremony. #profootballhalloffame2018 #2000baltimoreravens #superbowl35 #taylorblitzarchive #thechancelloroffootball #baltimoreravens #brianbillick #marvinlewis
Too hot... left my Suns cupcakes out and frosting slid off one.
Just got the 1981 NFC Championship as it was broadcast on CBS! Woohoo! Already had several versions includimg the Greatest Games version. My dude Calvin came through! #1981nfcchampionship #thecatch #81sanfrancisco49ers #81dallascowboys
Loading Comments...