Hail to the Redskins:  Really?  David Woodley can’t complete ANY passes in the second half of Super Bowl XVII for Miami?? None??  Ok he completed two in the second half, 1 to his team and an interception to Redskins S (present Green Bay Packers President & CEO) Mark Murphy and wasted a decent effort by the “Killer B’s” defense.  However the Super Bowl win by Washington was a throwback to old fashioned grind it out football with Riggins for 4, Riggins for 3, Riggins for 5, and wearing down the defense.  However, when I see this ring it takes me back to two weeks prior.

I can remember being fired up for the NFC Championship between Washington and Dallas and knew it was going to be a thing of beauty.  It actually started when the Redskins were putting the finishing touches on a 21-7 win over the Vikings to set up the NFC Conference final when the chant “We want Dallas!!  We want Dallas!!” resonated from the jam packed crowd at RFK.

Just moments before John Riggins, who had rushed for 185 yard was in the midst of a curtain, turned and gave a bow to the crowd sending them into a frenzy.  Those sights and sounds reverberated throughout the stadium and CBS chose instead of showing the final plays of the game, panoramic views of the raucous fans. It became a part of the story.

Then it really got started…

Beginning with Dexter Manley professing that he “hated Dallas” on Monday of championship week that got the ball rolling. It was all over ESPN…  Then came the back and forth in the newspaper from Danny White of the Cowboys, to Redskin owner Jack Kent Cooke, everyone was stoking the fire.  How bad did it get?  There was even a heated argument about the game within the House of Representatives the Friday before the game between Texas and Washington delegates where the late Thomas “Tip” O’Neill adjourned session an hour early.  It was on!!

Over a football game? Yes over a football game. The hating of Dallas really grew wings in the George Allen era in the early 70’s.  He preached it, lived it, and hated the treatment America’s Team received as a media darling. It kept breeding hatred within their division rivals.

Old time Redskin fans still talk with high regard of the fact that they beat Dallas in the ’72 NFC Championship when the Cowboys were defending champions.  So here we were some 10 years later and all that animosity was a thing of the past right?  After all new owner, new coach, new quarterback and cast of characters comprised the Redskins roster.  Right? 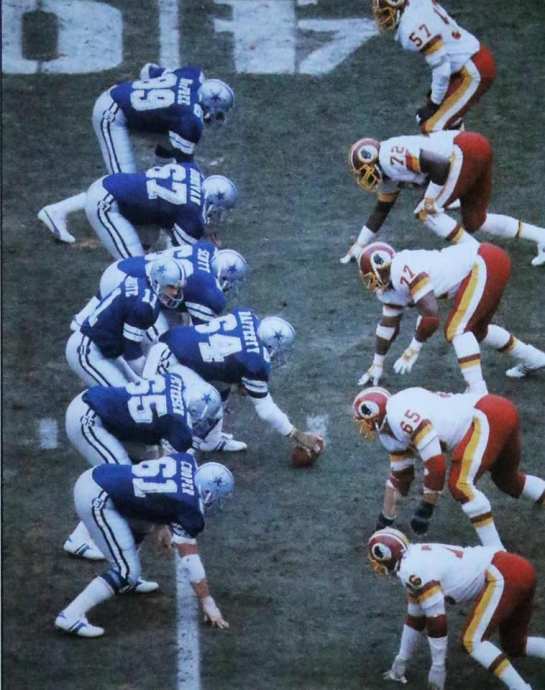 I still get chills thinking about that because kickoff was 30 minutes away and the crowd at RFK began another “We want Dallas!” chant. It wasn’t as boisterous as the one from a week prior but it stoked the fire. How must that have felt for the Cowboys to come out to shaking stands and all that noise during warm-ups let alone what would they hear on 3rd downs??  The Redskins weren’t a taunting team but they talked big before that game during the week and on the field pregame.  Near fights broke out….couldn’t have been better set up.

So what happened? Remember Dexter Manley?  Well he knocked Danny White out of the game with a concussion very early and forced Gary Hogeboom to finish a championship game he was ill prepared for.  Then clinging to a 24-17 4th qtr lead and the Cowboys having seized momentum, Manley struck again.  On a screen pass the hard charging Manley blew by the Cowboy tackle and as Hogeboom tried to float a screen to Dorsett, Manley tipped the pass that DT Darryl Grant took back 20 yards for the final TD to seal Dallas’ fate 31-17.  The entire team was in the endzone celebrating that touchdown…hadn’t seen that before.

So Joe Gibbs, Theismann, Riggo, The Hogs, & The Fun Bunch played a spirited game and here is a video recount of it.

They were off to play Super Bowl XVII in Pasadena against Miami.  Of course it was a day for Hall of Famer John Riggins who rushed for a record 166 yards and his famous “70 Chip” touchdown run that gave the Redskins a 20-17 lead in the 4th quarter on their way to a 27-17 triumph.  Of course it was the brass ring that they won but even in remembering their actions (expressed joy) the win over the Cowboys for the NFC Championship, meant more.  Want further evidence?  When Charlie Brown scored the decisive touchdown that put the Super Bowl away the entire team wasn’t in the endzone celebrating it the way they had against Dallas.  That’s how we know…

You couldn’t tell me otherwise…

This article is dedicated in the memory of former Washington Redskin owner Jack Kent Cooke and the late George Allen.

For a more visceral look