A few short weeks ago we lost Ken Stabler and it was felt by football fans everywhere. In my article describing why he should be in the Pro Football Hall of Fame, I cited the great moments he had as one of the reasons. He had so many famous 4th quarter finishes they had nicknames: The Holy Roller, The Sea of Hands, and The Ghost To The Post to name a few. However the one most people forgot about was his last great comeback. 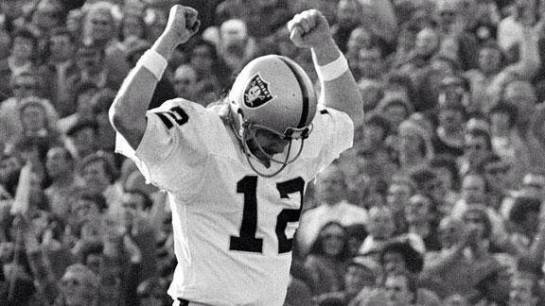 John Madden, Fred Biletnikoff were gone and many holdovers from the 70’s were being phased out in 1979. Tom Flores was now the coach and Oakland was about to miss the playoffs for the second straight year. Only the second time this had happened in 12 years. They traveled to New Orleans where both teams at 7-6, clung to fading playoff hopes.

The Saints had a shot at finishing with their 1st ever winning season. They had Pro Bowlers in QB Archie Manning, RB Chuck Muncie, TE Henry Childs, and WR Wes Chandler. Now on a Monday Night they were going to show the nation and the rest of the NFL they were to be taken seriously. They came out firing and took a 28-14 halftime lead on Oakland. The Raiders looked like an aging team as the Superdome was raucous from the 1st half heroics, then it got even louder early in the 3rd quarter:

…and just like that Stabler brought the Raiders back from 35-14 to the greatest comeback win in Monday Night history 42-35.  The Snake had gone 26 of 45 for 295 yards and 4 touchdowns, 3 of which were thrown in the 4th quarter alone.  On a Monday night in December 1979, Stabler turned back the clock with an unbelievable performance.