The Pro Football Hall of Fame class of 2015 is one where players had to wait a good while before being enshrined. Officially the enshrinement ceremony takes place on Saturday, however Charles Haley and his class mates received their “Gold Jackets” in a gala event Thursday night. 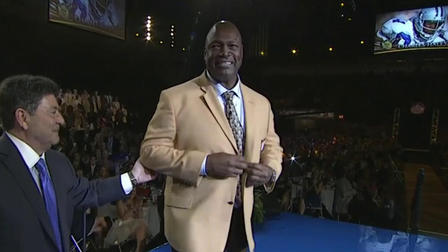 For years there had been a great debate concerning Haley’s worthy of Hall of Fame consideration. His contributions to the game have more to do with being one of the driving forces in two of the NFL’s modern dynasties. In winning 5 Super Bowl rings Haley did more than just show up. He recorded sacks in 4 of those games providing the turning point in Super Bowl XXVII and solidifying the Cowboys momentum in Super Bowl XXVIII with a huge 3rd quarter sack of Jim Kelly.

Over the course of his career, Haley had 100 sacks and 26 forced fumbles with his best season coming in 1990. His 16 sacks set the tone for a 49er team going for the 3-peat and the offense struggled during the season. In the ’90 NFC Divisional Playoff against Washington, the exclamation point had Haley slam into Mark Rypien just as he threw. The ball popped up and NT Michael Carter snared it and rumbled 61 yards for the touchdown. They won 28-10 and were hosting the New York Giants in the NFC Championship the following week. Haley played well in the 15-13 loss to the Giants recording a sack but his career took a turn dealing with the break-up of that team in the off-season.

In this ’99 interview with the late Steve Sabol you get to understand Haley and his personality best. He was one of the great players on his team but he did just as much to keep those teams loose going into high stakes games. You can’t discount that fact. So it will be interesting to hear his induction speech and which former teammates come to represent him. I hope to see a large contingent for him Saturday. Charles Haley take a bow… you deserve it and soak in induction weekend.

@talkingsopranos @steveschirripaofficial @realmichaelimperioli Good luck gents! Good stuff
Quick selfie... working from home
TBT -Taylor Blitz Throwback
View from the top. Well one of them. This is facing Glendale over some nice houses by the water. Can you see Cardinals Dome stadium at 1 o clock??
Out hiking with @lesliebench .. so blue and gorgeous out here. Can see for miles and miles
You know... this smoothie just looks right for some reason😉😎