When Shannon Sharpe was inducted into “The Hall” back in 2011, pundits began to voice which of the new breed would be the next TE to get into Canton. Would it be Tony Gonzalez, Jason Witten, or Antonio Gates?? There is even outside talk of former Patriot Ben Coates as these were the dominant men at the position over the last 25 years. Uhhh… wait a minute… How did we get this far without mention of former  Oakland/L.A. Raider Todd Christensen?? 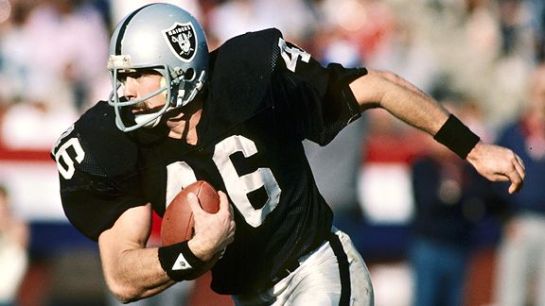 A man once cut by the Dallas Cowboys found a home in Oakland and became one of the main targets in the heyday of the AFC West. The question that arises is how did we forget Christensen?? Was it the fact he was a specials teams player who didn’t start until his 4th year?? Or is this more bias against the late Al Davis’ Raiders??

In 1980 the NFL was marveling at the performance of future Hall of Fame TE Kellen Winslow in San Diego. When he burst onto the scene with 89 receptions, a record for Tight Ends at the time, for 1,290 and 9TDs. He became the measuring stick for all who would play his position especially with this only his 2nd season.

When he completed the ’81 season with 88 receptions only future Hall of Famer Ozzie Newsome was anywhere near Winslow on the marquee. Or so pundits thought.

In 1981 after becoming the 1st defending Super Bowl champion to finish with a losing record (7-9) the following season, the Raiders had to make changes. The 1st is they moved to L.A. then drafted super back Marcus Allen then following an old Raider tradition, converted a former running back into a Tight End…. Todd Christensen. If you went back 2 decades before, the Raiders converted former Heisman Trophy winner Billy Cannon from RB to TE and sparked their run to Super Bowl II.

The ’82 Raiders had the NFL’s best record in a strike shortened season at 8-1, and Christensen finished 5th in receiving among TEs with 42 receptions for 510 yds and 4 TDs. Although the Raiders were upset 17-14 by the NY Jets in the AFC playoffs, a star was born.  The next year saw the Raiders cement the notion they had supplanted the Air Coryell Chargers as the best of the AFC West.

Every great player needs a signature game and in the 14th week of 1983 the Chargers were hosting the Raiders in a special Thursday Night telecast. To add to the excitement both Christensen and Winslow were on pace to tie or break Kellen’s TE record of ’89 receptions set in 1980. In front of a nationwide audience Todd proved his worth.

Buoyed by this great performance the Raiders propelled themselves to the AFC’s best record at 12-4. Not only did the Raiders go on to win Super Bowl XVIII, Christensen unseated Winslow as the game’s premiere tight end as the loss also ended the reign of “Air Coryell”. His 8 receptions 140 yards and 3 TDs completely outshone his Charger Hall of Fame counterpart’s 4 catches for 30 yards. This was the difference between Todd’s NFL record of 92 receptions to Winslow’s 88 to conclude ’83. The most ever by a Tight End at the time.

As injuries slowed Winslow it was Christensen who went on to maintain Pro Bowl level of play through 1987 when he went to his 5th straight. One aspect of a Tight End is to remember the primary role is to be a blocker. In the ’85 campaign he helped pave the way for NFL rushing champion Marcus Allen who ran for 1,759 yards. The following season he broke his previous NFL record for TEs as he nabbed 95 balls for 1,153 yards and 8 scores.

He led the NFL in receptions in 1983 and 1986 for all receivers not just Tight Ends.

In an era with 2 other Hall of Fame TEs Christensen had the best peak years.

Now to be fair, Winslow and Newsome’s years include the strike shortened ’82 stanza which only had 9 regular season games. However keep in mind Todd was on special teams as a long snapper, set 2 receiving records at TE and blocked for 1985’s MVP and NFL rushing champion Marcus Allen. Then don’t forget one of those record setting season was for a world champion when they won Super Bowl XVIII 38-9 over Washington.

Keep in mind his record for receptions in a season at TE was broken in 1994 by Ben Coates by 1 reception (96). Tony Gonzalez broke it in 2004 with 102 receptions, however Todd is the only one to have set the all time receptions record for a TE twice.

This isn’t to take away from the 2 gentlemen in “The Hall” from the same position, but how can Winslow (inducted in 1995) and Newsome (inducted in 1999) be in and we don’t even hear Christensen mentioned?? Is it because he was a late bloomer who went on to star on the 3rd team he played for?? Is this more of the media bias against Al Davis’ Raiders who seem to come up on the short end when it comes to Hall of Fame consideration??

A part of this has to do with the Raiders moving from Oakland to Los Angeles and then back to Oakland in 1995. Those Los Angeles sportswriters didn’t honor the team and campaign for those players once the team went back up north. Many sportswriters campaign for players whom they lobbied for their team to draft originally and usually in the 1st round. His rocky path to Oakland through Dallas and New York is why he didn’t have that.

Yet they have/had a responsibility and shouldn’t have taken it out on those player’s legacies. I see Bill Plaschke and J.A. Adande all the time on talk shows over on ESPN when they have an obligation as history’s gatekeepers with their fellow writers and they have failed. They are why Todd, Head Coach Tom Flores, Lester Hayes, and Cliff Branch are on the outside looking in. It’s time to right these injustices. Christensen deserves to be enshrined in Canton.

Although we lost Todd, who passed in 2013, his family and Raider teammates should be able to share in that final honor.

For induction into the Pro Football Hall of Fame, I present to you, Todd Christensen.

https://wp.me/p18f1N-2sf
Tony Soprano is sick of this failed 1st round QB in Jersey.
Congratulations on your retirement. Thanks you for the years of service. Now its your turn to receive that knock on the door. You were a great ambassador for the game and keeper of the flame safeguarding excellence in football history.
Just got in and what's on?? NFL SlimeTime on Nickelodeon lol. SO i had to turn it on. If Chris Berman woulda popped out I woukda died laughing.
Lets go Buffalo! Beat the bully on the AFC block in the 2 time AFC Championship Chiefs tonight 38-20!! The Thurman Thomas autographed pic behind me was also against the Chiefs..93 AFC championship game.
Getting the brain cells goin'
Loading Comments...