Roughing the quarterback where you cant land on them is going to lead to really hard hits on the quarterback. Defenders are going to speed into the collision so the hit knocks them down instead. This will lead to plays that cause concussions not lessen them. 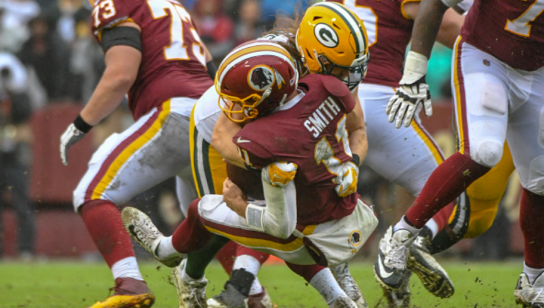 This isn’t about fantasy football… this about the game of football. Defense, hitting, and tackling are the essence of the game. What is ironic is they keep flagging Clay Matthews for the take down tactics that Anthony Barr injured Aaron Rodgers with last year when he got hurt. The NFL in a knee jerk reaction made a stupid rule change and doesn’t want to admit they were wrong.

Every former NFL player is talking about how idiotic the rule is and only those who haven’t played the game could come up with something so impossible to do.

No one wants to see injuries however they are a part of the game. Its a tough sport and the corporate soft men at the top who never played have too much sway. They don’t understand the visceral side of the game that many of us love and why we played the sport and appreciate NFL players who took their craft further.

Make the game softer? No! Do you remember when former President Theodore Roosevelt saved football at the turn of the 20th century??

After a string of deaths during games in 1905, President Roosevelt met with elite coaches in a closed door meeting at The White House to save college football. It was there that Roosevelt revealed that collegiate men had become soft and a gladiator game like football was needed to keep men hardened. In fact he went on to reveal his “Rough Riders”, the first voluntary cavalry in the Spanish American War of 1898 were made up of football players.

Instead of the game being abolished new rules were made to make the game safer. Of those who met with President Roosevelt that day, Walter Camp went on to father the forward pass as an offensive tactic. The 10 yards needed to gain a first down was another rule change. So the game remained a rough tough  sport however fatalities were reduced.

The men who President Roosevelt summoned for that closed door meeting in the White House went on to found the NCAA. Pro Football was in its infancy and took it’s cues from college football at the time. It would be another 15 years before the NFL began play in 1920.

In the game of football either you want to hit or get hit, if not go play lacrosse or one of those sports Roosevelt was talking about that was making American men soft. If you want to watch a man fling a ball all over the field and not get hit go watch lacrosse. All these roughing the passer penalties are ruining the game and giving teams cheap first downs. It’s a sport first not a television show. So every week your favorite actor (QBs) won’t be in each episode because there are injuries in a game.

So we have to wait all year with this dumbass rule because they won’t pay players in the concussion settlement. They are trying to act as though its about player safety. Its about limiting potential legal litigants later when this group currently playing retires. It’s about protecting the shield. Then also to water down the product where quarterbacks don’t leave the field after being hit….however

Be careful what you wish for. It was injuries that led to each of these Hall of Fame quarterbacks to emerge in a sport and not a television show.

You cant have a gladiator game without gladiators.