With it being Hispanic Heritage Month, I have always found it hard to believe how Joe Kapp seems to be forgotten among Hispanic football fans. Not one time has The Chancellor met a hispanic Minnesota Viking fan or a Viking fan because of Joe Kapp. In a historic sense, Tom Flores and Jim Plunkett’s exploits are remembered more fondly and that is sad for Kapp’s contributions were just as great.

Flores was the first QB of Mexican descent that won a Super Bowl. Yet he did so as the backup to Len Dawson on the Super Bowl IV champion Kansas City Chiefs. The first Mexican-American quarterback who led his team to the Super Bowl as a starting quarterback was Kapp who was across the field for the Minnesota Vikings.

Although he spent the bulk of his career in the CFL, Bud Grant brought him down to play for him in 1967. He had won several Grey Cups and was known for being a fiery leader. That and the fact he threw some of the ugliest wobbly passes from not using the football’s laces.

In 1968 Kapp led the Vikings to the first playoff game in the franchise’s history. However they lost to the Baltimore Colts 24-14. The Colts set the NFL record that year only allowing 144 points and were lauded as the best in history. Only a loss in Super Bowl III diminished their impact. They had defeated Joe Kapp….right?

In 1969 the Vikings lost the first game of the season 24-23 to the New York Giants. Kapp didn’t start or play in that game. However he was available for the week 2 rematch with Baltimore.

The NFL record for most touchdown passes in a game has Kapp’s name on it with 7. It would take rule changes and another 44 years before Payton Manning tied this record in 2013. The Colts loss to Joe Namath’s Jets in Super Bowl III strained Don Shula’s relationship with owner Carroll Rosenbloom, this 52-14 loss broke it. The next season he would be gone to Miami where he became the NFL’s winningest coach. Joe Kapp had a hand in that.

Starting with the week 2 win over Baltimore, Kapp led the Vikings to 12 straight wins. The longest win streak in the NFL in 35 years. Keep in mind the NFL was only in its 50th season. No quarterback would win 12 straight regular season starts in the same season until Tom Brady in 2003, some 34 years later. Finishing with a 12-2 record the Vikings went on to Super Bowl IV where they lost to the Kansas City Chiefs 23-7.

He left the Vikings after a contract dispute and joined the New England Patriots where he only played the 1970 season. Was he not afforded the respect of prominent white quarterbacks of the time?? Why wouldn’t they sign him?? The 1969 Vikings broke the NFL’s defensive scoring record allowing only 133 points on their way to Super Bowl IV. If Kapp stayed to lead the offense would they have made it to Super Bowl V?? Last year I did a series on the best ever defenses, where it was discovered the ’70 Vikings gave up the fewest yards per game for every defense since. Yes they would have… 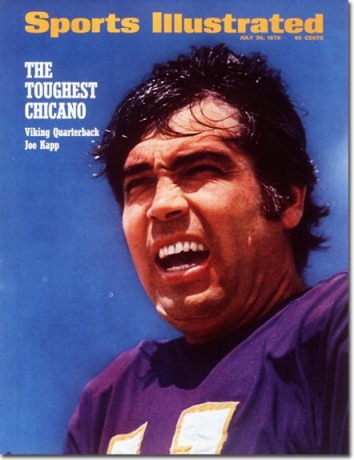 Joe Kapp only played 5 seasons in the NFL but he was a trailblazer. Tom Flores was the first Mexican American starting QB with the AFL’s Oakland Raiders and was a Kansas City Chief across the field in Super Bowl IV.  Yet Kapp played with distinction and set several records on his way there. He’s a cult hero who should be celebrated for his contributions to the game. He led his teams to championship games at Cal, the CFL, and the NFL. The very definition of a champion. To complete this circle for Hispanic Heritage Month… Who was the quarterback drafted #1 by the New England Patriots in 1971 after Joe Kapp?? Some guy named Jim Plunkett…

One day I hope to walk by and see a Hispanic kid with a Vikings jersey with the number 11 on it. That would be the coolest thing. Don’t forget Joe Kapp.

The NFL’s northern most outpost was originally an AFL territory yet the story has been told how they jumped ship and were given an NFL franchise. However the years that followed saw a team that struggled for respectability. 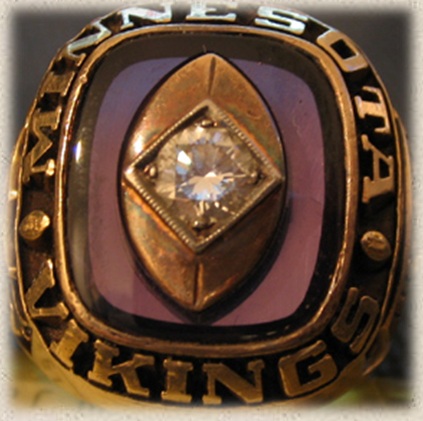 However the 1969 Minnesota Vikings sported the first Mexican American to quarterback his team to the Super Bowl in Joe Kapp. Never understood why they don’t have a larger Hispanic following with such a significant historic backdrop.

The Minnesota Vikings had departed with Fran Tarkenton and brought in Joe Kapp (California Bears) from Canada to play quarterback. He threw ugly passes and played football from his gut. He was a fearless leader who avenged a playoff loss the year before against Baltimore. In 1968 the Colts were regarded as the greatest team with the greatest defense ever. The Colts beat Minnesota 24-14 in a divisional playoff match where they sacked and hit Kapp repeatedly. 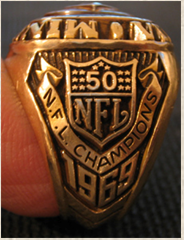 In 1969, game 2 he threw for a record 7TDs in a rematch with the Colts to wrest the NFL dominance mantle winning 52-14. Led by The Purple People Eaters defensive line of Alan Page, Carl Eller, Gary Larson, and Jim Marshall, the league’s #1 unit carried the team through the season. The Vikings went on to finish on a 12 game winning streak and broke the Colts 1968 defensive record of 144 points allowed with 133. It was just the tonic the NFL needed as writers / loyalists established the Vikings an 11 point favorite. Not since the 1934 Chicago Bears rolled into the NFL Title Game undefeated had the league witnessed a winning streak as long as the Vikings.

It was during the NFL playoffs where Kapp cemented his legacy. On a routine pass play, protection breaks down and Kapp escapes the pocket. Coming up to make the tackle was Cleveland Brown linebacker Jim Houston. Joe gave a shoulder fake and went right into Houston. Unwittingly he kneed him in the head knocking him out cold. Quarterbacks don’t knock out linebackers. This further enhanced the image of the Vikings as a rough and tumble ball club.

Although Super Bowl IV was the last game for Joe Kapp, he galvanized the team as they remained among the league’s elite over the next decade. They were the last NFL champion before the merger with the AFL and were a team in every sense of the word.

Congratulations on your retirement. Thanks you for the years of service. Now its your turn to receive that knock on the door. You were a great ambassador for the game and keeper of the flame safeguarding excellence in football history.
Just got in and what's on?? NFL SlimeTime on Nickelodeon lol. SO i had to turn it on. If Chris Berman woulda popped out I woukda died laughing.
Lets go Buffalo! Beat the bully on the AFC block in the 2 time AFC Championship Chiefs tonight 38-20!! The Thurman Thomas autographed pic behind me was also against the Chiefs..93 AFC championship game.
Getting the brain cells goin'
Tom Brady on The Shop.. This beginning rant rumor has it he was talking about Chicago or San Francisco. What do you think? #taylorblitzarchive #theshophbo All topics of conversation happen at the barbershop... No black barbershops in Boston... Tom hangin' out...
Got to see my boy Sean play football last night. Great to see him growing up to be a fine young man and now playing high school football?? Love it. Played slot receiver, corner in the slot, nickle safety and linebacker. Proud of him
Loading Comments...