There is an old axiom when it comes to boxing when you hear someone say “styles make great fights” meaning opposing styles colliding provide great theater. Never was this more evident when it came to the San Francisco 49ers and the New York Giants of the 1980’s. The identity of the men from Gotham was a blood thirsty defense led by Lawrence Taylor, arguably the greatest defensive player ever. Joe Montana had ascended to legendary status as he led the NFL’s most efficient offense to 4 Super Bowl titles that decade. They would meet in a fitting crescendo that still has ramifications to this day. 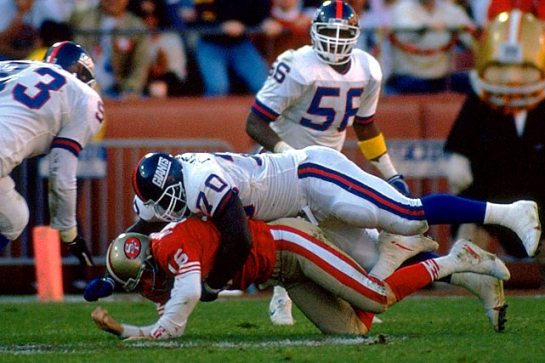 Leonard Marshall clobbers Joe Montana and knocks him out of the 1990 NFC Championship Game. He doesn’t return to action until the final game of the 1992 season against the Detroit Lions.

If you travel to 1978 the Giants and 49ers met in what was a forgettable season for both. New York won 27-10 out in Candlestick during the 4th week. Yet they only won 3 games the rest of the stanza while San Francisco only won twice. Both began by hiring coaches in 1979 in Bill Walsh and Ray Perkins which set the course as each regime rose to prominence in the decade to come.

The next step was the selection of franchise quarterbacks, first Phil Simms in New York in round one and Joe Montana in the third. Each turned to the draft for the same spark on defense a few years later when the Giants selected LB Lawrence Taylor and Walsh’s selection of FS Ronnie Lott both in the 1st round in 1981. 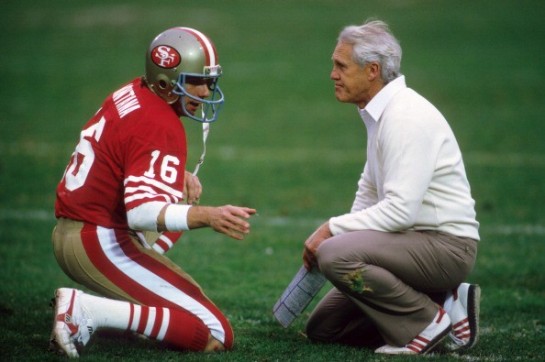 Walsh and company ended an 8 year playoff drought with a 13-3 record and homefield advantage as Montana and company had come of age. New York defeated Dallas 13-10 to earn their first trip to the NFL postseason in 18 years. Then after a 27-21 upset of the defending NFC Champion Eagles in the wildcard round, New York was one step away from the NFC Championship Game and traveled west to face San Fran.

Going into it were the questions could NFL Defensive Player of the year Lawrence Taylor get to Joe Montana?? Could the finesse passing game take down the Giants’ hard rock defense?? Walsh’s team was shattering the NFL paradigm by passing first to set up the run. Contrary to popular belief was the fact it was San Francisco’s defense ranked #2 to the Giants at #3.

Montana was 20 of 31 for 304 yards for 2 TDs in a 38-24 win under the lights. Up next came the NFC Championship with Dallas & The Catch, then a Super Bowl XVI trophy and all the prestige that came with it. Walsh became the toast of the league and christened with his “genius” label. Joe became one of the faces of the NFL and would be one for the decade of the 1980’s. 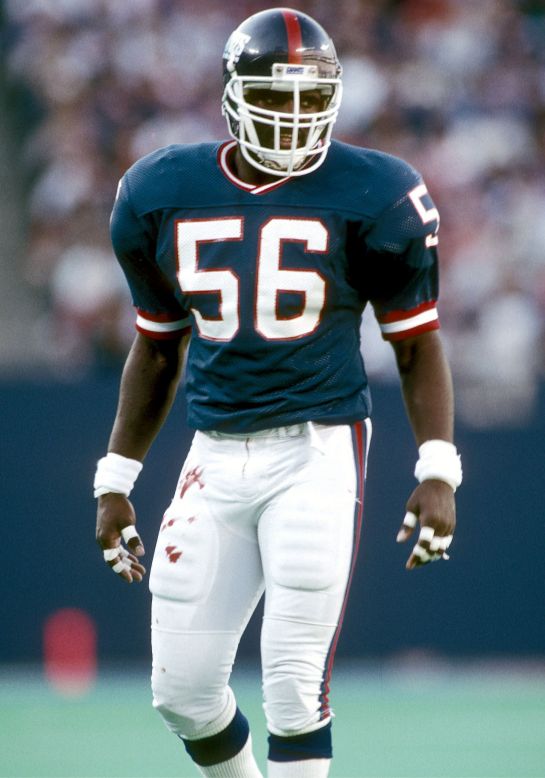 Taylor was the toast of New York.

The vanquished?? Well New York Defensive Coordinator Bill Parcell’s unit collapsed giving up a season high 38 points. They had only given up 30 once the entire year up to that point. As is the case when teams come up short in the playoffs, their knocked off kilter for a couple of years. Parcells succeeded Perkins after a 4-5 season in ’82 and was nearly fired after a disastrous 3-12-1 rookie year in ’83. Yet all the while Walsh was one of the NFL’s faces as the 49ers bounced back and came within a couple bad penalties from winning the NFC Championship a 2nd time in 3 years. They fell to Washington 24-21 yet the media felt validated in the moniker they anointed Walsh with….”genius.”

Parcells bristled at the attention Walsh and the 49ers “finesse” approach to the game was getting. It only intensified in ’84 as they went 15-1 and threatened to go undefeated. New York rebounded as Phil Simms finally emerged from the shadows and became a 4,000 yard passer and the Giants returned to the playoffs. Another NFC playoff loss to Joe and the Niners 21-10 relegated the Giants to the NFL’s jr varsity as Walsh and Joe went on to hoist another Lombardi trophy.

However over the years Parcells kept building a team of brute force. Although they had been effective he drafted 6-4 240lb OLB Carl Banks who was a blue chip strong side ‘backer. Brought in 288 lbs DE Leonard Marshall to replace a 259lb Gary Jeter. He kept building upon his defense and relying on a straight forward power rushing attack.

Finally in the 1985 playoffs, the Giants #2 ranked defense held Montana and the 49er offense out of the endzone for the first time in a 17-3 Wildcard win at home. For the first time ever Parcells and the Giants beat the Niners in the 80’s and in the locker room he scoffed “What do you think now about that west coast offense?” In a bit of irony he wound up coining the name Walsh’s offense would come to be known forever. 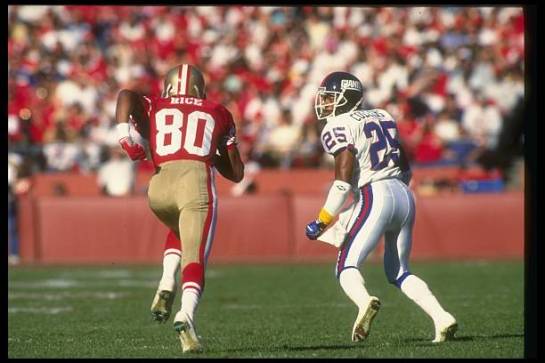 However the Giants were manhandled in Chicago 21-0 on the road to the eventual champion Bears. Both teams were built in the same old school fashion. You win with brute force on the line of scrimmage with a heavy front 7 and a strong offensive line with an offense that relied on the run. Yet the Giants sent alarm bells off all around the NFL when they already had a strong defense yet spent their first 6 picks in the first 3 rounds all on defense.

They fortified their defensive line with 6’4 280 lbs DE Erik Dorsey, NT Eric Howard who stood 6’4 275, 250 lb ILB Pepper Johnson along with crafty CB Mark Collins who was nearly 5-10 200 lbs. Collins turned into one of the Giant defense’s greatest assets as he blanketed Jerry Rice and was the best in history covering him. This gave the Giants a tremendous advantage for years to come.

In the ’86 playoffs the Giants defense had come of age and starting with a 49-3 devastation in the NFC Divisional Round it became clear the pendulum had completely swung. Jim Burt knocked Joe Montana out with seconds to go in the 1st half as Taylor returned an interception 34 yards to swell the score to 28-3. In an embarrassing fashion Walsh’s squad was hammered into submission. Physically beat down unlike any game they had seen since they rose to prominence.

This forced the 49ers to finish what they started in the ’85 draft when they started drafting to fortify their lines and bigger running backs to deal with the Bears and Giants. In ’87 it took shape however it came to fruition as they won Super Bowls XXIII and XXIV after the ’88 and ’89 seasons. Walsh had stepped down after the XXIII championship and former DC George Seifert took over head coaching duties. Mike Holmgren and the 49er offense had elevated their offensive play to one of near perfection. Walsh’s legend only grew even in his departure for creating the offensive system which allowed his 49ers to become the team of the decade.

Going into 1990 pundits were debating not only were the 49ers the best ever team but was Joe Montana the best ever quarterback?? The same could be said of Jerry Rice as he had assaulted the record books and had also been a Super Bowl MVP. On their way to back to back championships they had set the NFL record with 18 consecutive road wins. Now they had the chance to win 3 straight Super Bowls where it would leave no doubt. They began the season with a 10-0 record and…

Waiting for them who also began 10-0 was the Giant team that had learned how to win from the 49ers and had taken it up a level. Now the more powerful rebuilt 49ers who had a 2-3 record (0-2 in the playoffs since ’85) staring them down. Were they lucky they hadn’t met the Giants in the playoffs in both ’88 and ’89?? Would they even have won back to back had New York had a shot at them??

In week 12 each team was 10-1 when they met in San Francisco on a Monday Night. In the 2nd highest watched MNF in history the 49ers beat the Giants 7-3 in a slugfest where the Giants inability to score a touchdown on offense did them in. In 3 shots inside the redzone they could only score 1 field goal. Yet to a man the Giants relished another shot at San Francisco. Finally they would have their chance in the NFC Championship Game. For the decade the record between the two stood at 2-2 and they would meet in the last chance to halt “Camelot’s” greatest procession into history.

In the collective gasp after the Leonard Marshall hit you knew everything had changed. The silence that befell Candlestick Park as Montana writhed in pain on the ground for several minutes was palpable. Unlike most games where the network would take a commercial break, a nationwide audience sat glued to the football version of a tragic event. The greatest ever quarterback whose nimble feet that had deftly dodged trouble in and out of the pocket forever in January’s past had been viciously taken down. The Camelot Bill Walsh so eloquently stated of that era ended in that moment. The final kick by Matt Bahr for the 15-13 win was just icing on the cake made by a ferocious defense in one of the greatest games in NFL history.

The era closed with the Giants holding a 3-2 edge in postseason games although the Niners were team of the decade. Over the next 26 years coaches from both sides made it to the Super Bowl 14 times with Bill Belichick (8) Tom Coughlin (2) Mike Holmgren (3) and Jon Gruden (1). This doesn’t include Bill Parcells’ 2nd Super Bowl triumph 1 week after this game vs Buffalo in XXV. Much has been made of the Bill Walsh coaching tree but take a look at the one stemming from Parcells’ group. Its second to none and it all started with a championship win over Camelot in 1990. 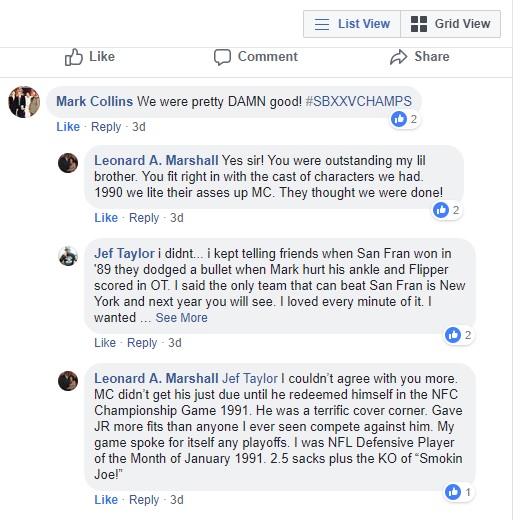 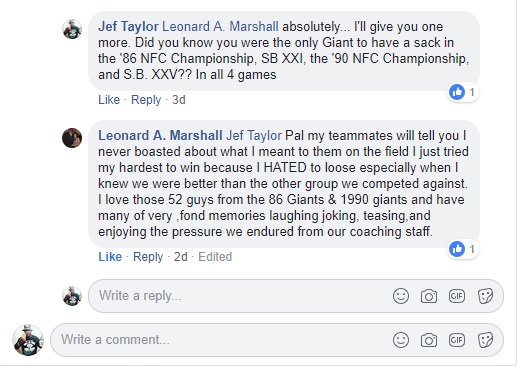