When football fans and historians talk about big physical cornerbacks who dominated wide receivers in yesteryear, several names come up. Dick “Night Train” Lane, Mel Blount, Lester Hayes and Herb Adderley come to mind. Yet history has always been slanted toward players before the AFL-NFL merger.

Over in the AFL there were some great players history has overlooked.We’ve already taken a look back at Fred “The Hammer” Williamson and now need to do so with Butch Byrd.

He starred on the 2 time defending AFL champion Buffalo Bills at right cornerback. The Bills were the most dominant defense in the history of the AFL. Byrd only played 6 of his 8 seasons in the old league yet was an all star on 5 occasions. He was nudged out by David Grayson and Hall of Famer Willie Brown for cornerback on the All Time AFL Team.

Byrd could cover and could hit. He finished his career with 40 interceptions, returning 5 for touchdowns. An excellent defender whose hitting and coverage makes Byrd a “Soul of The Game defender.

Long live the AFL! Thanks for reading and please share the article..

One true friend to Taylor Blitz Times is AFL historian Ange Coniglio. His website RememberThe AFL is a permanent link on Taylor Blitz and the best reference point for everything about the American Football League. 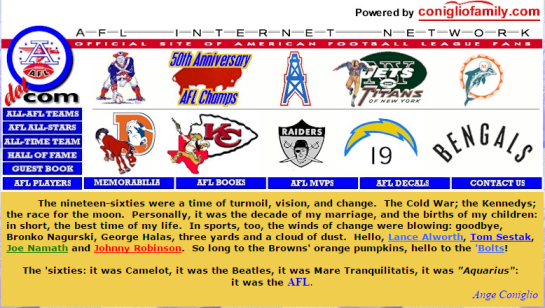