In the last few years, we get to the NFL playoffs, it’s interesting to hear short sighted fans ask why the NFC Championship trophy is named after George S. Halas and the Super Bowl trophy is named after Vince Lombardi. Several times our CEO has heard on multiple occasions that one of the trophies should be named after Tom Landry. Those Cowboy fans couldn’t be more delusional.

First off, Tom Landry never had a back to back champion that would qualify any of his Cowboy teams as a best ever unit. What would be the basis for this?? Because he won 2 championships as coach of the Dallas Cowboys and coached for 29 years?? That is nowhere near close enough to unseat George Halas who coached for 40 years, and his six championships are the most ever. Not only is he the Phil Jackson of the National Football League when it comes to coaching championships, he’s also the  founding father of the NFL and the Chicago Bears. No George Halas, no NFL, its that simple.

Don Shula has overtaken him as the coach with the most wins 347-324, but you have to realize he was there pushing the pro game from it’s infancy to the modern age. Yet if you want to base it on just coaching feats try these on…

Ring for the 1933 Chicago Bears championship.

Earlier we mentioned Landry not having coached back to back champions, well Halas did it twice. First in the 1932 & 1933 seasons, then in 1940 & 1941. The latter dynasty featured the 73-0 defeat of the Washington Redskins in the 1940 NFL Championship Game that introduced a new backfield alignment, the T-Formation. For a seven year period, his Chicago Bears won 4 championships which nearly equals what the Steelers (4 in 6 yrs) did in the 1970’s. His greatest team were none of these.

In 1934 with his chance to three-peat, he had an undefeated team in the NFL Championship Game when the Giants “outsmarted” them switching to basketball shoes on in icy field. That 30-13 loss brought an end to his first dynasty. So it wasn’t Don Shula with the first team to finish the regular season undefeated and Bill Belichick suffered the same fate in 2007, but he was going for 3 in a row at the time.

As for his last championship in 1963: 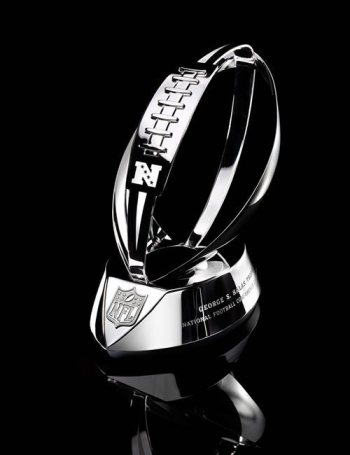 The George Halas Trophy that is awarded to the NFC Champion.

George Stanley Halas led an incredible football life. Without his efforts of over 60 years the National Football League and the subsequent All America Football Conference and the American Football League wouldn’t have had the wings to take flight. Each of those rival leagues had to have the NFL to aspire to be greater than. So when you see his name on the side of the NFC Championship Trophy, understand his importance to pro football.

The list of his Champion Chicago Bears championship teams:

The ring for George Halas’ last champion Bear team from 1963.