Super Bowl XIV was the culmination of the Pittsburgh Steelers and their incredible record as a football dynasty. It was their 4th title in 6 years. They had started as one of the greatest defenses with a solid running game. Yet they evolved into one of the league’s most explosive passing games with the ’78 rule changes. For several reasons this was one of history’s most unique champions. There were storm clouds on the horizon however…

In 1979 the Steelers were a defending champion and were the NFL’s best but it was evident teams were catching this aging team.

One of the most unique elements of this champion is how mistake prone they were. Did you know this was the only Super Bowl champion that won the title while leading the NFL in turnovers?? They had 52 turnovers and still went 12-4. In two of those games they turned it over 9 times in a 34-10 loss to Cincinnati, then 8 more in a 35-7 loss to San Diego. 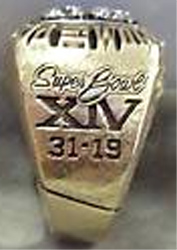 However they could show extreme force as they beat Denver 42-7 and Dallas 14-3 in Super Bowl XIII 1/2. They bludgeoned two playoff teams that played in the last two Super Bowls in back to back weeks. These came during a four game stretch where they held each opponent to under 10 points. Yet they were bookended by the numbing losses to Cincinnati and San Diego.

The other unique aspect of this team is it’s the only champion ever comprised of players who had only played for Pittsburgh. All original draft picks and free agents. When they made it to Super Bowl XIV, it was almost a celebration of the Steeler way when they faced the Rams with 3 former Steeler coaches in Defensive Coordinator Bud Carson, Woody Widenhofer, and Dan Radakovich. These men were a part of the dynasty since they were on the staff back in Super Bowl IX and X.

When this team was challenged they could focus and win on experience. Truth be told the tell tale signs were there this would be the last year they would be ahead of the NFL pack. Their 31-19 win over the Rams out in The Rose Bowl was more a curtain call for those great aging Steelers. Chuck Noll’s men took their place as one of the NFL’s greatest dynasties.