During each postseason every football fan dreads a moment where the game is decided by the referees and not the players on the field. We think back to “The Tuck Rule”, Mike Renfro’s catch/non catch in the ’79 AFC Championship, or Bert Emanuel’s catch/non catch in the NFC Championship. Yet yesterday for the 1st time since Referee Jim Tunney made the call after Renfro’s catch had a nationally televised audience yelling in anguish at a moment instant replay could have corrected.

Sean Payton dispairs over one of the most egregious non calls in NFL history.

Football coaches and players at all levels will tell you “The eye in the sky doesn’t lie” meaning the truth is always caught on film. It’s there for teams to study film against an opponent or the camera can catch what has been missed by the naked eye of an out of place referee. On Sunday we were stricken with two occasions that marred both conference championship games.

Which raises some questions for the NFL:

Lets take a look at the 1st in the NFC Championship. With just 1:49 to go in a 20-20 tie at the 13 yard line, Drew Brees faced a 3rd and 10. Brees threw toward the near sideline to Tommylee Lewis who had run a wheel route out of the backfield when… and here it is in real time:

Coach Sean Payton screaming at the official withstanding, there were several penalties that could have and should have been called.

The fact we’re talking the final minutes of a conference championship game on the line and a Super Bowl berth at stake, this is one of the worst outcomes in the history of the league.  The fact you had Fox analyst Mike Pereira, who is the former Vice President of Officiating for the NFL right there expressing there could have been two of the penalties I just highlighted lent to a national televised audience despair with the situation. Let alone the emotional release of the Super Dome crowd who was witnessing “the great train robbery.” With booing you could have heard across state lines in Mississippi.

Our minds as fans were just coming to grips with the fiasco in New Orleans and the NFC Championship when the AFC Title Tilt reached the 4th quarter. With 7:05 to go in the game Kansas City held the momentum and a 21-17 lead when Chris Jones was flagged for a “roughing the passer” penalty. It was such a bad call both Jim Nantz and Tony Romo were in the middle of professing it was a phantom call when former NFL official Gene Sterratore offered this commentary:

Andy Reid should have been allowed to challenge that personal foul call!!

Now we have to talk about what needs to be done in this situation. First where has Roger Goodell been in the midst of one of the worst scandals in the history of the NFL?? His silence is glaring during a week when the league’s integrity is being called into question. With a Super Bowl on the line, these calls to put what many feel to be the match-up the league office wanted to see makes this the equivalent of the Black Sox Scandal in baseball a century earlier. If the Los Angeles Rams were to win down in Atlanta next Sunday, the NFL could wind up with it’s first champion with claims against it’s legitimacy.

There are several precedents that should have taken place. Goodell should have stepped in and had the final 1:49 of that game replayed. However he didnt and we have to guard the integrity of the game and remove the league office from the involvement of any contest while it’s going on. The league office controlling the official instant replay calls with 2:00 or under has always been a sore spot of contention anyway.

#2. Open Instant Replay challenges to three (per half) to all coaches and allow challenges at any and all times of the game. This needs to be opened up to challenge penalties called on the field and any 15 yard foul or defensive penalty that carries the weight of an automatic first down whether called or not called.

#3. The NFL needs to move to assigning officiating crews who have worked together all year to oversee playoff games. Not an all star crew. This way these officials know how to work together and communicate verbal and non-verbal along with confidently conferring with each official before making a big call in an important juncture of a playoff game.

The purpose of instant replay as an officiating tool is to get the call right. Ironically the day before these events, The Chancellor heard from Jim Tunney “The Dean of NFL Referees” about the controversial call in the ’79 AFC Championship his crew made on Mike Renfro’s catch/no catch that gave berth to the first incarnation of instant replay in officiating:

Here is what Jim Tunney offered as an explanation: 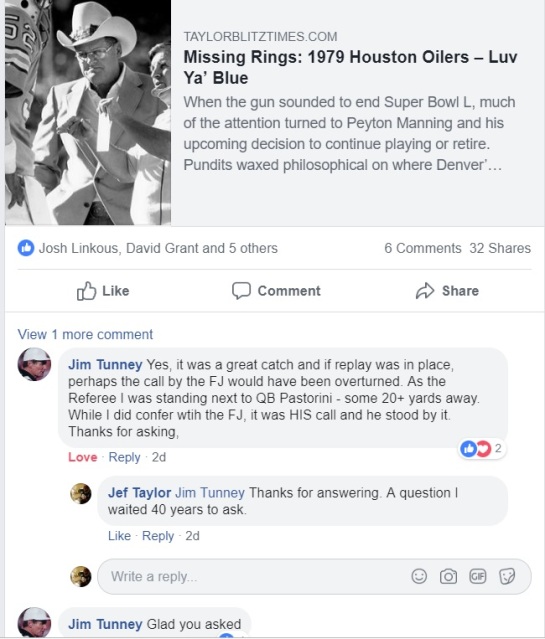 That scenario offered finality in knowing Tunney and his officials made the call on the field that day. As a historian I’ve never been able to speak on the Steelers as Super Bowl XIV champions and I doubt I would be able to do so if the Rams win it next Sunday.

However we need to see changes and the NFL needs to guard it’s integrity by letting the officials and an instant replay official on-site make every call concerning any contest. Blown calls need to be reversed even when it comes to a penalty being called or reversing a call where a flag had been thrown. Too much is at stake here.