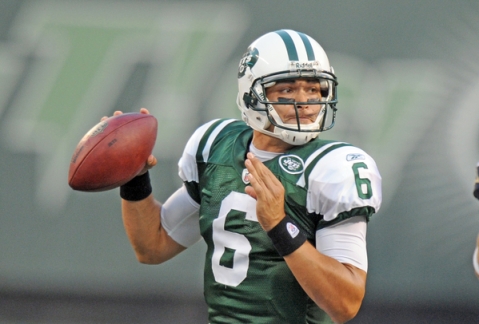 Everyone is giving an opinion on the quarterback controversy between Mark Sanchez and Tim Tebow in New York,  now it’s time for The Chancellor to weigh in. The latest comments coming from New York Jets quarterback coach Matt Cavanaugh. First he expressed that Sanchez made ‘poor decisions’ last year and now the next day raving about the upside of Tebow’s throwing prowess. It’s been interesting to watch. From the second New York signed Tebow the controversy started and as usual the Jets have been vocal in the media yet none seem to support their starting quarterback of the last three years.

Ironically now Tebow comes to work and the first item praised is how he’s working on his throwing ability. Are you kidding me?? His stat-line for the 2011 season was 126 of 271 for 1,729 yards 12 TDs and 6 interceptions. He completed just 46% of his passes….46%?? In an NFL that has changed the rules and officiating to the point that every major passing record fell last year and that was the best Tebow could do?? So he’s to unseat Mark Sanchez who competed 56% in going 308 passes out of 543 attempts for 3,474 yards, 26TDs and 18 interceptions??  That can’t be a sentiment expressed with a straight face… not if you know football.

By the way, Sanchez’s 26TDs were the most by a New York Jet since Vinny Testaverde threw for 29 in 1998. In that year Testaverde led the Jets to the AFC Championship Game.

No doubt Sanchez has to improve on his interceptions but too much has been thrown on his shoulders. Let’s talk about the complete and utter collapse of the New York rushing attack and defense to start the 2011 campaign. First off going into week 5, the Jets defense had given up 34 points in back to back outings against the Raiders and Ravens. Where was that stout defense you were known for?? It was at that point we here at Taylor Blitz started to criticize the anemic rushing attack of Shonn Greene and LaDanian Tomlinson who were averaging 3.1 and 3 yards respectively.  https://taylorblitztimes.com/2011/10/09/nfl-week-4-afc-east-see-you-at-the-crossroads/ Greene only had 157 yards rushing in the first four games. This before the Patriots throttled them 30-21. Although the team fought back and had a chance for the playoffs this really derailed your season. The blueprint was the Patriots game.

The Jets as an organization and a coaching staff are more to blame than the quarterback. It was you who let Sanchez confidante and productive route running receiver Braylon Edwards go. How close were they?? When Braylon landed in New York the teammate he met was Sanchez who was studying film at the house of then Jets safety Kerry Rhodes. He was his go to guy. You signed Santonio Holmes to a $50 million contract who runs very lazy routes yet was supposed to be the deep threat. Isn’t it ironic that Edwards had better statistics in 2010 when you made this bonehead decision (Edwards 53 rec. 904 yds /7TDs to Holmes 52 rec. 746 yds /6TDs).  http://www.pro-football-reference.com/teams/nyj/2010.htm Edwards reception yardage record was nealy 3 yards better than Holmes. To top it off you lost WR Brad Smith in free agency then to add further insult to injury you signed another terrible route runner in the slow Plaxico Burress, who had been incarcerated for more than a year and was not in football playing shape. All of this before you also lost dependable 3rd down WR Jerricho Cotchery.  Fittingly the first grumbling heard about Sanchez was from Holmes, the receiver the Steelers gave up on after he was a Super Bowl MVP for them. Great for chemistry. 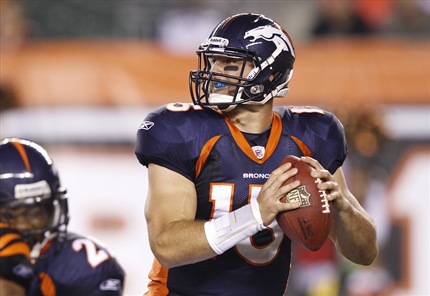 As for Tebow, the circus comes to town with him. He has a tremendous following that has more to do with his religious convictions than pure football skills. He did have many a fourth quarter rally and you have to give him credit for that. What needed to be pointed out that wasn’t, was the Bronco defense keeping him in all those games. Tebow fans say how much of a leader he is…well so are most quarterbacks. Yet time and time again we kept saying that the Broncos have to minimize his passing to make him more effective. https://taylorblitztimes.com/?s=Tebow+Quotient Coming out of college, our CEO had Tebow as an H-Back or Tight End because of his questionable throwing and his statistics bore that out. We said we would grade him fairly and we have. Tebow fans point to his 6 fourth quarter comebacks yet seem to go blank on the 40-14 loss to Buffalo, 45-10 trouncing they took at home from the Detroit Lions, the 41-23 pounding they took from the Patriots before being routed 45-10 in the playoffs.

The last time I checked, Mark Sanchez won in the playoffs IN New England the year before and held the NFL record for road playoff wins with four until Eli Manning broke it last year. Tebow has one home wildcard win to Sanchez’ four road playoff wins and 2 trips to the AFC Championship Game. So let me get this straight… You want to replace a quarterback who’s beaten Belichick and New England on several occasions including playoffs for one that has been routed each time he’s played them with an ineffective running game?? Good luck. If you wanted to light a fire under your present quarterback, draft one. These non votes of confidence for your incumbent could derail this entire season if things don’t get off to a good clean start. Don’t take blame front office it’s all the quarterbacks fault and now you’ve whipped your fans into a frenzy with all the talk coming out of New York. First with Super Bowl promises and now with nonsensical desperate moves. Did you know the Broncos scored 309 points while allowing 390?? That’s a negative 81 point differential… and if Tebow was so effective, why did he get ousted and Peyton Manning signed in the blink of an eye??

By the way…if Tebow starts, Rex Ryan will be the first coach fired this year because it will be an abject failure…and you heard it here first.