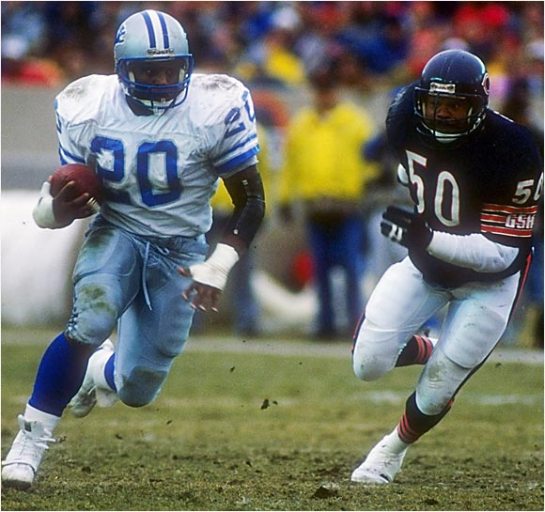 The most elusive running back in NFL History and greatest in my estimation. If you take a look at all running backs they have their greatest season totals within their first four years. The average running back’s career is actually 3.7 years but look at them all… Earl Campbell, Eric Dickerson, Jim Brown, Terrell Davis, Emmitt Smith, Walter Payton, hell even OJ Simpson. OJ was forced to play wingback his first three seasons but once he was moved back to a true running back situation he burst on the scene and in his second year gained his 2,ooo yards. Why am I bringing this up?? Well Sanders had his best season in year NINE when he finally got a fullback.

His last battle was against the up and coming Baltimore Colts in the season finale in 1998. As the game was nearing it’s end, Sanders needed less than 10 yards to finish with 1,500 yards (would have been his fifth or sixth straight year in a row) and on 6 carries battled it out with Ray Lewis and the gang for that honor. The Ravens held up but the moves, effort, passion displayed by both Sanders and the Ravens was a sight to behold. He finished with 1,491 prompting Chris Berman to announce “the world is still flat” in an obvious reference between Sanders’ yardage total and matching it to a year in history.

What is interesting to talk about now that Barry’s career is over is how incredible would his numbers have been had he NOT played in the run and shoot? There was once an article about the run and shooot that said “replacing a tight end and a fullback with two additional receivers and the corresponding replacement of two linebackers for secondary players removed 17% of the body mass at the line of scrimmage.” What this also did was move two more defensive players six or more yards off the line of scrimmage. So when Sanders broke into the open as a young NFL runner, players had angles on him which shortened many runs.

Once the Lions abandoned the prinicples of the run and shoot (around 1995) Sanders flourished once they brought tight ends and blocking backs in the game. With teams playing with a normal defensive 11, whether a 3-4-4 or a 4-3-4, once he broke the line of scrimmage he was able to scream to the endzone with 73% of the defenders within 5-7 yards of the scrimmage line. No one had angles on him and he started breaking off monster runs. In 1996, the NFL had 10 runs of greater than 60 yards, SIX of them belonged to Barry Sanders. Had he played with a traditional offensive formation the duration of his NFL career, not only would Barry Sanders have obliterated Walter Payton’s all time rushing record by 1999, he would have been the only back in NFL history to have multiple 2,000 yard seasons. The Chancellor’s estimation is he would have had at least 3, 2,000 yard seasons. Think not??

When I think of Eddie George, I think of a great running back who deserves to be in both the college and pro football hall of fame. George had a great season when he won his Heisman. In that year, George ran for 1,927 yards and 24 touchdowns, running away with the vote. Well if you added another 701 yards and 13 more touchdowns then he would tie what Sanders did in his.

That is a complete season for some college running backs. In 1988 when he ran for that 2,628 yards and 37 touchdowns, it was easily the greatest season a running back has ever had. He achieved those numbers in a traditional offensive alignment (FB & TE) and was playing in the Big 8 which is now the Big XII. Remember Colorado played for the National Championship after the ’89 season, and there was Oklahoma who played for the National Championship in ’88, and Nebraska….so you can’t say he was in a weak conference either. Yet when it came to attacking a defense and destroying pursuit angles, Sanders was that fast…and this is before we start talking about the moves.

Yet we know he stepped away after the 1998 NFL season. Had he played in a traditional offense he would have already broken Payton’s all time rushing record in just ten years. As it was, he ran for 15,269 yards in those 10 years. When comparing him to contemporaries of his time, the first person that comes up is Emmitt Smith. Each were NFL rushing champion 3 times during their respective careers and were compared to one another for years. Outside of Dallas Cowboys football fans it’s clear for the rest of us to see. Sanders came into the NFL in 1989 and Smith in 1990. Sanders was relevant his entire career where by the time Barry is rushing for 2,053 yards in 1997, Smith only had 1,074 and seemed to be done before a late resurgence. Barry retires before the 1999 season and it takes Emmitt another 3 1/2 years to break Payton’s all time leading mark. Barry was on pace to break it right about the time of Payton’s death in October of 1999, yet the record didn’t fall until 2002. Just put that in perspective…
At Gale Sayers Hall of Fame Induction ceremony, owner and founder of the Chicago Bears George Halas proclaimed “Gale Sayers, his like will never be seen again.” which was echoed by generations of NFL fans. Yet when it comes to Barry Sanders, not only can the same be said but those prior generations of fans along with Generation X and Y are all in agreeance on his talent. He even amassed statistics to go along with it.

I can’t wait to see Barry Sanders: A Football Life

They Call It Pro Football - Official Blog of NFL Films

Editor’s Note: NFL Films’ Paul Monusky and Nick Mascolo are the producers for this week’s episode of  “A Football Life”, featuring Hall of Fame running back Barry Sanders.  Here’s Monusky’s thoughts on what he learned about Sanders and his effect on others.  Be sure to tune in to “Barry Sanders: A Football Life”, this Wednesday at 8 PM / ET only on NFL Network.

In the summer of 1999, arguably the greatest running back in NFL history walked away from the game at the age of 31. Without a press conference, or a lavish farewell tour, Barry Sanders faxed in his retirement to a childhood friend who worked at their hometown paper and then took off to England to walk around the streets of London for two weeks. Football fans around the world, and especially in Detroit, were left with many unanswered questions.

When I was told I would produce “Barry…