Alright NFL fans, answer this question:  Who was the first NFL team to play in Chicago?? The city where George Halas, long thought of as the NFL’s founder had his team?? Yup that’s right The Arizona Cardinals when they were the Chicago Cardinals and the Bears were in Decatur Illinois. You missed that?? Well the Bears were the Decatur Staleys back then. What made us think of it was joining the Facebook group Bring Back the Los Angeles Rams and it made our CEO ponder: Why isn’t there a group asking to bring back the Cleveland Rams?? or the St Louis “football” Cardinals?? 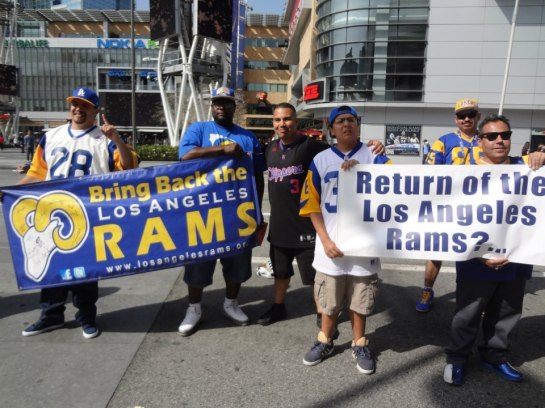 Its crazy when you find out you’re the rebound boyfriend or girlfriend, but that’s the scorn left in the wake. You weren’t the original love nor were you the person once love blossomed anew. You’re just the one without. Its happened to NFL cities and it’s ironic that St Louis and Los Angeles both sat in this cauldron of long forgotten feelings.

For once upon a time, the Chicago Cardinals battled with the Bears, who moved in from Decatur in 1920 for the hearts of the city of broad shoulders. George Halas and the Bears won that particular battle and the Cardinals moved to St. Louis in 1960. Then the Bidwell’s moved the franchise again in 1987 to the city of Phoenix.

Before the Los Angeles Rams moved to St. Louis there were fans there that missed their football team. Yet the internet wasn’t in full bloom nor was there a mass media outlet to show this missing sign of support, but it existed. Otherwise why would Georgia Frontiere move the Rams there before the 1995 season??

Then you had the Cleveland Rams who never dominated the landscape of the NFL, have a powerhouse of a team in the Cleveland Browns playing in the rival All American Football Conference. A precursor to the American Football League. This was the late 1940’s when America had just returned home triumphant in the second world war and began to enjoy pro football as entertainment that would soon rival baseball. How do we know this?? The ink hadn’t dried on the Potsdam Declaration ending WWII when the AAFC was formed in 1946. In four short years the Browns dominated and won all four championships before the league folded and were absorbed into the NFL along with the 49ers and Baltimore Colts in 1950. 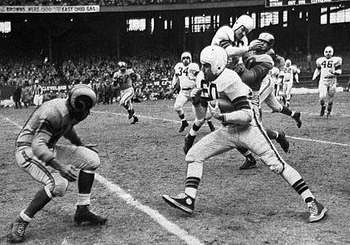 In another round of “this town ain’t big enough for the both of us” the Rams decided to move to Los Angeles knowing they couldn’t compete with the champion Browns for the hearts of Cleveland. The only time a team left Cleveland and Art Modell wasn’t to blame…yet we digress. Ironically in that first season of both teams playing in the NFL, they played each other for the NFL Championship in 1950. One of the greatest games in NFL history.  It would be assumed that old Ram fans became Browns fans in Cleveland

The forgotten aspect of both situations in St Louis and Los Angeles is they were not the first city these teams played in. They were the rebound fling and Angelinos are pining for the Rams to come back west. Yet where was all this support when the Rams were in Anaheim?? In 1994 the Rams hosted the Los Angeles Raiders, in the last year both teams were in Southern California, their game drew 60 K but 2 weeks later drew a home crowd of only 34,000. Yet like a scorned love those fans wish for their lost team to come back to them and forget how little support was shown when the relationship existed. 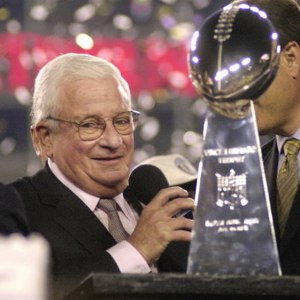 St Louis had their pining for the departed Cardinals filled after just 8 years when the Rams moved east for the 1995 season. In 44 years in Los Angeles, the Rams won only 1 NFL championship in 1951, yet only made St Louis fans wait just 4 years before The Greatest Show on Turf took the title in 1999. Those fans in Los Angeles were the first to watch their former team win a Super Bowl championship in a new city. The following year it was Cleveland’s turn as they watched the Baltimore Ravens win Super Bowl XXXV. Former Browns fans watched with horror as the late Art Modell hoisted the Lombardi Trophy just 5 years after moving to Baltimore.

Here is the real issue… The NFL thrives as an entity because of the revenue generated from television more than it does from the gate. The gate is important but a team is nothing more than a company and if the gate isn’t there, it will seek greener pastures. The teams split that gate 65/35 for the home and away teams. The personal seat licenses (PSL) and luxury boxes are the revenues that a team can keep to themselves. Hence we saw the boom in new stadiums from the mid 1990’s on. The other revenue streams a team can keep to themselves are the stadium naming rights, parking, and concessions. If the team can’t draw fans to the stadium, they will fall behind their competition when it comes to financial competitive balance. You do want your team to sign that free agent tackle next year…right??

At one time it was thought the NFL needed Los Angeles, with the nation’s #2 television market, to have a team. Our CEO contended then as he does now that it doesn’t. We just kicked off our 18th NFL season without a team in Los Angeles and it doesn’t seem to bother Vance Lockett who is watching games on NFL Sunday Ticket in Columbus, Ohio. Yet to the attending fan cheering for their team living where they have the chance to go to the actual games. Go when you can. The rules are set up to get you to the stadium in the first place.  In a direct television market, NFL city with a team, you are only guaranteed to be able to watch the road games in a particular season. Any concurrent broadcast of another game on the other network, Fox or CBS, will not be shown because you belong to that team. Hence a week ago The Chancellor of Football was stuck watching the Cardinals face the Lions instead of the Manning Bowl in New York… So instead of the 3 free broadcast games you only get 2 before the Sunday night game.

You only get to see the home games in those NFL cities if the game is sold out. This is when you hear of the “blackout being lifted” in television jargon. They’re figuring is: Why watch it on television when you can go down and pay your way to see the game?” So while our CEO (in Columbus, Ohio at the time) was able to watch and record the 1992 Wild Card Game, where Buffalo came from a 35-3 deficit to beat the Houston Oilers 41-38 in the greatest comeback in NFL history, people that lived 3 blocks from Ralph Wilson Stadium did not. The game wasn’t a sell out.

Just like those forlorn fans that pine for teams that once were in Cleveland, Los Angeles, St Louis, Houston, and especially Jacksonville for that matter: Get to the stadium and go watch a game! If that team gets down financially and decides to leave, it’s gone and it’s gone forever. Ask those Houston Oiler fans or even the Rams fans pictured about the despair that replaces the cheers once the team plays elsewhere. Los Angeles is nothing more than a bargaining chip for NFL teams to leverage their present cities and our CEO doubts the NFL ever returns there. Los Angeles is an overpopulated aging decaying city that is destined to feel old.

Along with the fact there is no space and it would be cost prohibitive to build a new stadium, people in Los Angeles are front runner fans that won’t support a non winner. After the 1994 game when BOTH Los Angeles teams played and drew 65 K, the Rams attracted less than 60 K in the 2 remaining games combined. This is before we even talk about the travel restraints thanks to overcrowded freeways. Corporations know better than to take those risks and that’s what NFL teams are…corporations.

Even the Chancellor of Football moved the Taylor Blitz Times headquarters out of congested Southern California to the beautiful clean open area of Glendale, Arizona. Why take the financial risk of moving to Los Angeles, when you can get between 10-15 million in the nation’s #2 television market to purchase NFL Sunday Ticket anyway?? You’d have more of a chance moving the Los Angeles Dodgers back to Brooklyn…oops we forgot those first reasons are exactly why the Dodgers left Brooklyn 56 years ago. See?? We’ve been here before.