It has been 27 years since Walter Payton suited up for an NFL game. Before his passing in 1999 the question could be raised was he the greatest legend the game had known?? After his passing his legend is unmatched by any player of the last 60 years. “Sweetness” as a nickname is synonymous with those of “The Galloping Ghost” the “Steel Curtain” that will be shared with football fans forever. 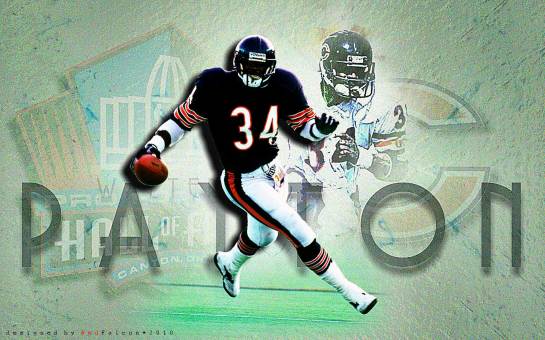 Although he is no longer the NFL’s leading rusher whenever you see a runner fighting for more yardage, you think of Payton. In The Chancellor of Football’s estimation during a majority of his career he was overshadowed by Tony Dorsett then Eric Dickerson since they were more flashy runners. It was grit and determination that made Payton special. Unlike other runners one man couldn’t bring him down nor could someone shoulder him down. Payton’s spirit was that of a great warrior and it took more than one man to stop him.

If you were to travel back to the 1980’s the standard bearer for runners was the great Jim Brown. He set the NFL’s all time rushing yardage mark with 12,312 yards when he retired in 1965. Only OJ Simpson came close to passing him finishing with 11,236 when he ran out of gas in 1979. Payton’s career long assault had him within reach as 1984 beckoned. Before he could eclipse Brown’s mark the comparisons started. Who was better?? Jim Brown or Walter Payton??

The video you just watched had been produced before Payton had become the all time leading rusher. They edited it before the second week of the 1986 season and re-aired it. He was about to score his 100th touchdown in the famous “Buddy Bowl”, where Buddy Ryan who had been the architect of the Chicago Bears championship defense the year before.  He returned as head coach of the Philadelphia Eagles.

Not only did Payton score his touchdown, he had his last true great game as he gouged the Eagles for 177 yards. It was his 75th 100 yard game. Much like Marvin Hagler in boxing, national media showcased Payton in the twilight of his career. Of course it was once he surpassed Jim Brown and his unbreakable all time rushing record was when he finally was afforded that status. That moment took place October 7, 1984.

At one time he had the greatest rushing performance in an NFL game with 275 yards and pushed the all time rushing record to 16,726 yards. Each of these have been broken but who embodied the spirit of the determined runner fighting a defense fighting to stop him?? Emmitt Smith and Corey Dillon come close but none matched his fury. Looking back on all these careers it was as though other runners were playing a role created for them by Payton. As thought they were all trying to impersonate him. Make no mistake about it he was The Chancellor of Football’s favorite player during his career.

The poignant moment that was etched in my mind wasn’t his sitting alone on the bench after his last game in the 1987 playoffs. It was his sitting on the bench by himself toward the end of the 1984 NFC Championship Game. Chicago was losing 23-0 to the San Francisco 49ers and it looked like this was the closest Payton would make it to the Super Bowl.

In an instant the flash entered my mind that his career would be over soon and he hadn’t been a champion. Then the great ’85 Bears stormed to the Super Bowl XX championship. He rushed for over 1,300 yards in 1986 then let it be known during 1987 it would be his last season. Sure he wasn’t the same runner as he split time with heir apparent Neil Anderson. It was at this time you had to reflect back on how great Walter had been over the years.

Friday would have been Walter Payton’s 60th birthday and he’s still missed by football fans everywhere. Yet we know the trials he faced toward the end of his life. Its better to focus on his play and the bright personality that we remembered him for. 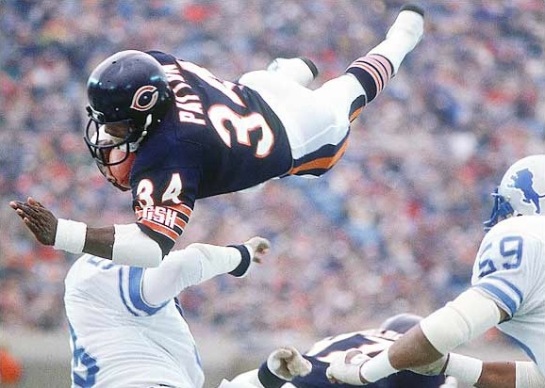 Walter Payton soaring as he is in heaven above.

Happy 60th birthday Walter Payton from a true fan that didn’t get a chance to meet you. Its fun to share vids for those who were younger that didn’t get to see you play or see the footage of your exploits. My gift to those fans in your honor started on your birthday. RIP Sweetness. Thanks for reading and please share the article. Epilogue: An extra video on Walter Payton’s 1984

Payton reflecting on the bench after the ’87 playoff loss to Washington. His last game.