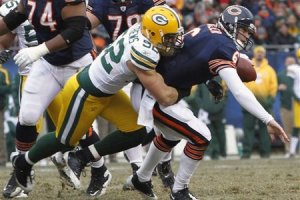 What began on a sun kissed day in Soldier Field as a celebration of the most important game in the history of the Bears v. Packers rivalry ended with the rival Packers celebrating amidst a silent Soldier Field.  The sound and the fury that enveloped the stadium at the beginning of the game was in stark contrast.  Detractors of Jay Cutler were rewarded with a personal meltdown at the most inopportune time, removing himself from the game halfway through a 21-14 loss.   Now the Packers move on to face the Pittsburgh Steelers in Super Bowl XLV in two weeks.

Aaron Rodgers had come into the game as the hottest quarterback in this year’s playoffs.  He started off this game as cool as John Wayne going 4 for 4 on the first drive for 76 yards concluding in his 1 yard touchdown run.  Through much of the first half the Bears defense was struggling to slow the Packers offense who ran with more authority than was expected.  Charging out to a 14-0 lead in the early 2nd quarter.  They kept their defense rested and Chicago’s offense was a portrait of inefficiency.  The first 6 Bear possessions resulted in 5 punts and an interception while gaining a paltry 103 yards. 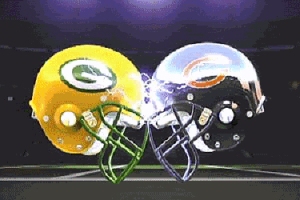 quarterback with the sloppy footwork that he was last year.  Missing wide open receivers on several occasions, he looked to lose his confidence as the first half wore on eventually removing himself from the game after the first half.  Gone was the cool performer that seemed to turn the corner last week’s playoff win against Seattle.  In fact the Bears as a team looked to start this championship game flat emotionally.  It took until the middle of the second quarter for the defense to begin to hit Aaron Rodgers and play like the monster that roared through the season.  However with a 14-0 halftime lead the Packers were on cruise control having their defense shutting down Matt Forte in the running game and intercepting Cutler’s last ditch deep throw before halftime.

The Bears defense began to assert itself from the second quarter on.   They sacked Rodgers on a several occasions and intercepted him twice.   The latter of which by Brian Urlacher kept the Packers from putting the game away near the Chicago goal line.  Yet it was too little, too late.

For the storyline of this game was the Green Bay defense.  They had stripped the Bears of their offensive rhythm and won the game with constant pressure.  The Packers held Cutler and his replacement Todd Collins, to 6 of 18 passing before giving up yardage to an unknown 3rd string quarterback in Caleb Hanie.  However they took advantage of Hanie’s inexperience by fooling him into the game deciding touchdown when B. J. Raji from his defensive lineman position, dropped into coverage, intercepted the pass, and waltzed into the endzone for a 21-7 lead.   Chicago frantically moved downfield for a touchdown to narrow the gap to the final 21-14 score.  A second Sam Shields interception ended Hanie’s Walter Mitty fantasy of saving the Bears season.

Thats harsh but lets face it this kid was thrown to the wolves and came up with the fighting spirit that the Bears offense lacked for much of the game.  He played better than could be expected.  It was as if some of the Bears were having an out of body experience, like someone told them it was an exhibition game.  With Hanie in there a fighting spirit was ignited and amidst his frantic last second attempt while they were marching, he was undercut by a bizarre timeout from the sideline and a reverse to Earl Bennett which forced a fourth down throw intercepted by Shields.

As for Jay Cutler, perception is reality, and his questionable removal of himself from this game left a bad taste in the mouth of many fans.  Its understood that team captain Brian Urlacher stood up and towed the company line not questioning Jay Cutler’s toughness but lets take a closer look at it.  There was a time where you looked for Jay to rally the troops and be the leader he has been accused of not being before.  There was a period in the second quarter where Cutler had thrown an incompletion and was looking forlorn at the ground in his own endzone and not rallying the troops.  He has to understand that as a team leader you can never let your teammates see you down and he kept that loser body english up. This sabotaged his team’s confidence and furthermore as Hanie attempted to ready himself for his second possession, an aloof Jay Cutler sat near him on the bench not going over polaroids to help his understudy.  All of this coming just three years removed from watching an impassioned Phillip Rivers with a torn ligament wrapped in a knee brace, limp onto the field, and leave it all on the field in an AFC Championship against the New England Patriots.  A badge of honor that stands as River’s calling card.  Cutler’s perception will be that of the aloof quarterback on the sideline as his team soldiered on and thats not a good one.  He needed to fight to get back into the game period.

As we lionize the 6th seeded Green Bay Packers and their road warrior status, the stakes of this game makes this one of  the sweetest wins in team history.  They get to go to Soldier Field, beat their arch rival Bears and take home the George Halas NFC Trophy.  Now roll to Dallas with a chance to win the Lombardi Trophy for Super Bowl XLV.  Rodgers didn’t have his best performance  but he didn’t need it.  The Packers running game stayed on course with 120 yards rushing with Starks accounting for 74 yards.  Greg Jennings repeatedly beat Bear cornerback Tim Jennings for 8 receptions and 130 yards. It was a total team victory with surprise performance by rookie Sam Shields, from Miami, who had a monster game with a sack, forced fumble and two interceptions.

Aaron Rodgers has a chance to totally erase the Brett Favre retirement debacle with another win.  He can equal ole’ number 4’s Super Bowl championship total with one more win.  He long validated the move to anoint him the Packer starting quarterback, he now stands the chance to move to the vanguard of the league’s young guns.  Make no mistake about it.  The Bradys and Mannings of the world are slowing down and becoming elder statesmen of the league with Brady going into year 12 and Manning year 14.  This is a quarterback in his prime and he’s primed to win a title.  Can he do it??

Thanks for Reading…. suggest to your friends.

At home chillin' watchin Super Bowl Opening Night day after attending the event. Super Bowl LVII ball in hand. Off and look forward to rest of the week #thechancelloroffootball #superbowllvii #taylorblitztimes #nfl
In the last 8 years, each team has won one. The Dick Vermeil/Andy Reid Bowl. Both coached in both places. Super Bowl LVII will be a great game.
Trent Dilfer on Bullies from Baltimore Sunday night: "The modern game doesn't impress me. It's so easy to play when you can't hit the quarterback or receivers over the middle or reroute receivers."
Just.... lol
Mama Kelce in the pre show...
Loading Comments...