The NFL saw some serious change swept in during it’s second week of play. For most they would think the Bears losing to the New Orleans Saints proved Chicago has a long way to go. Another loss by Minnesota is pushing us closer to the Christian Ponder era and the end of the Donovan McNabb experience. Yet upon further review, the Green Bay Packers at 2-0 are the defending NFL Champion and Aaron Rodgers is off to a torrid start. Then you have the Detroit Lions, who followed up a week one win over Tampa, with a 48-3 trouncing of Kansas City who made the playoffs last year. An eye opening experience to say the least. However when you look at the totality of this division, keep in mind the Bears throttled the Atlanta Falcons in week one and had one of it’s leaders playing with a heavy heart in Brian Urlacher in the loss to the Saints. The Vikings still possess the league’s best running back in Adrian Peterson, who’s ink just dried on a new contract worth $96 million over 7 years. He is the new millenium’s Eric Dickerson, we may not know how great he can be, but he will be getting the ball the remainder of this campaign with the passing game in an anemic state. Count on it.

How can we be so adamant about asking the question concerning the overall division?? Take a look at who these teams beat in the first two weeks of this new season. The Atlanta Falcons, Tampa Bay Buccaneers, New Orleans Saints, Kansas City Chiefs, were all playoff teams last year and the losses by the Vikings to the Buccaneers and the Chargers, who finished last year #1 in offense and #1 in defense, all figure prominently in the 2011 NFL campaign. Then throw in the loss to New Orleans by Chicago, who are just one year removed from being NFL Champions themselves, and you have a powerful division.  At the present, this is how the landscape shapes up: 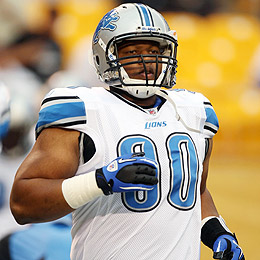 Start of the oncoming storm....Suh and the Detroit Lions!

So lets take a look at the timing of the Peterson signing and understand one thing, he will be getting the ball. Especially with a defensive minded coach in Leslie Frazier, who benefitted as a rested defender in his day while Walter Payton bludgeoned opposing defenses.  His aging defense needs help so they figure to be a run first team. After a dysmal 39 yards passing in week one (cut it out Freddie Mitchell..lol) from Donovan McNabb, they dropped this signing and gave Peterson the ball for the remainder of the season figuratively. Now he has to carry the ball the team on his back this season with the biggest game coming this week versus the Detroit Lions. Yes, the team that is showing a gaudy +52 point differential against their opponnets.

We tried to warn you that one of the ways a team rises from the ashes as a franchise is when they learn to win as a group. https://taylorblitztimes.wordpress.com/2011/05/19/2011-detroit-lions-preview/  This team won the last four games of last season to get a taste of winning. Much like a killer dog that’s tasted blood for the first time, it’s going to take a huge effort to keep this team from marching forward. As we spoke in our team journal to kick off this season, they need the onfield maturation of Matthew Stafford to see this team ascend to their rightful place. This year they will come real close to the NFL championship that they will be in play for soon.

Understand that in this young season, the NFC North has faced the #2, #3, and #5 offenses while the Lions and the Packers register at the #8 and #9 offensive spots respectively. This group of players are about to reshape the NFC this year and folks should be ready for this situation. The Lions season is about to shape around their matchups with the Vikings and Bears respectively in weeks 3 and 5. The world champion Packers are about to take on the Bears, Broncos, and Falcons. The next few weeks should provide how strong the Packers can defend their title. Especially with the news of FS Nick Collins’ season neck injury. As last year showed, the Packers should be bolstered by an offensive array that will cover defensive deficiencies…will it cover them for the majority of the year?? Time will tell…

Who will come out of this division??

2 thoughts on “NFL Week 2 NFC North: Is This The New Toughest Division In Football??”