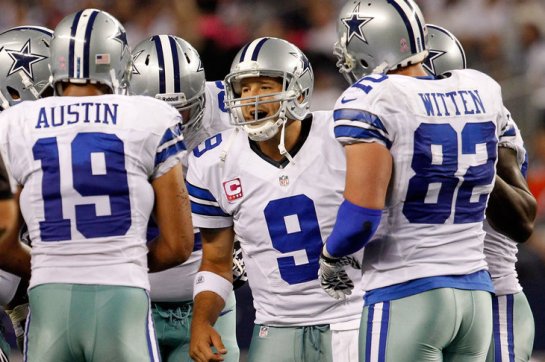 The Cowboys self destructed again today with untimely penalties and poor clock management in a 31-29 loss to the Baltimore Ravens.

If you listen to the mainstream media or Jerry Jones, you’ll get the impression this team has the best personnel in pro football. From time to time they’ll put together a good game but will ruin the continuity of their play with an inability to finish drives, or quarters, that would give them command of football game.

Take what happened in the game earlier today. Leading 7-3 and at the Raven’s 15 yard line, the Cowboys incur two illegal shift formations and get thrown for a huge loss forcing them to kick a field goal and changes the complexion of the game. At the time Dallas had rushed for nearly 100 yards in the first quarter and were on the verge of taking a 14-3 lead on a Raven team that had not gained a first down yet. Instead they lose momentum and the Ravens put a drive together bolstered by a 57 yard reception by Ray Rice and make the score 10-10.

On the next drive Romo throws his fourth interception of the season, on third down, once he’s inside the Ravens 30 and the Cowboys played pensively the rest of the half. In fact the Cowboys had the Ravens held to a 3rd and 15 with less than 3:00 left in the half and Anquan Boldin, who was covered by a linebacker, makes the first down. Consequently Flacco gets hot and drives the Ravens to the go ahead score with a 19 yard touchdown to Torrey Smith with :41 left until halftime. In position to go up 14-3 they wind up being down 17-10 in a matter of minutes. Self induced errors kill this team time and time again. This turnaround sapped the confidence from a Cowboy team that was gashing the Ravens defense. Listen… DeMarco Murray had 13 carries for 90 yards with 8:00 to go in the first half!! Then they went to the air and abandoned the run the rest of the half.

During the game CBS put up a stat that Tony Romo is rated last in quarterback rating on 3rd down in the NFL. Now its hard to keep harping on a team for it’s shortcomings but when a team continually beats itself, how do you not talk about it?? 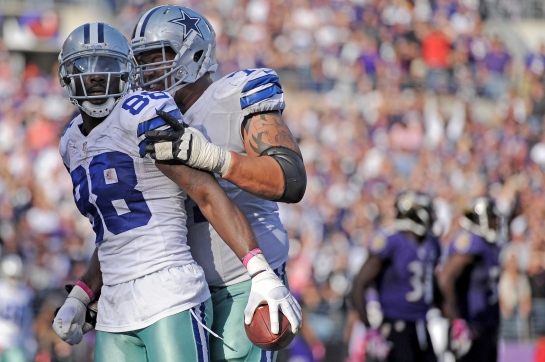 After the Cowboys give up a kickoff return for a touchdown to Jacoby Jones, they rediscover their running game. Felix Jones and #34 Tanner who chipped in several impressive runs. After performing possibly a team and season defining drive to tie the score the Cowboys hit the self destruct button once again. They ran the ball down the Raven’s throats (226 yards most ever against Raven defense by the way)and then almost faltered once they made it to the goal line again. First they had another illegal shift penalty before Romo hit Dez Bryant with the touchdown to bring them within two at 31-29. Then on a carbon copy throwback fade that gave them the touchdown, Dez Bryant drops a perfectly thrown ball with less than 1:20 to go in the game.

Then came the end of the football game where the final few plays illustrated the damaged fight or flight mechanism of Tony Romo. After recovering an onside kick, Romo had the chance to get off a few plays to put themselves in position for a more manageable game winning kick. After a first down, the clock was down to :25 left in the game. Romo caught the Ravens in a blitz and had both Miles Austin and Craig Ogletree running fly patterns with single coverage. What does Romo do?? The check down that would be fine if it were the middle of the game, saw Dez Bryant tackled in bounds with the clock running. He should have taken a shot down the field. Even though they had a time out left, they don’t call it and had to wait for those receivers to make it back to the line of scrimmage. Bryant was tackled with :15 left in the game. They let almost ten seconds burn off the clock before calling timeout. This forced a young kicker, Dan Bailey to kick a 51 yard field goal that was wide left with :01 to go.

All of these doomed the Cowboys to a loss that drops them to the NFC East basement with a 2-3 record. With the Redskins beginning to feel their oats and the Giants putting the wood to the perceived best team in San Francisco today. When are the Cowboys going to turn this around?? They completely outplayed the Ravens today and were too afraid of success to close the deal. Have the Cowboys really not practiced what to do when there are seconds left in the game?? Of course they have but the Cowboys keep blowing situations and that is the fault of coaching. This team is one loss away from the buzzards circling overhead for Head Coach Jason Garrett. Time and time again if it isn’t a Romo short circuit: Not throwing the ball downfield or using the timeout to preserve 10 seconds it’s Garrett’s play-calling. First abandoning the run when Murray was averaging 6.6 yards per carry and Jones with 5.1 yards at points during each half. http://www.nfl.com/gamecenter/2012101406/2012/REG6/cowboys@ravens#tab=recap&menu=highlights

Bottom line is they gave this game away today. The Ravens didn’t win it, the Cowboys found a way to lose it.

Time is running out on this era of inconsistent Cowboys football. We here at Taylor Blitz Times are always saying “At some point, you have to believe what you are seeing.” This is an average ball club with average personnel and very average results. In their last 200 games, the Cowboys are 100-100. They are a mistake prone bunch that will give games away like they did today. Constant mistakes at the point where they’re concentration should be at their best says something about the damaged psyche of this football team. Can they straighten themselves out before this season is over as Jerry Jones would have you think?? The Chancellor just left our meeting shaking his head.